Inexpensive, but not “cheap” transportation that’s actually fun to drive! 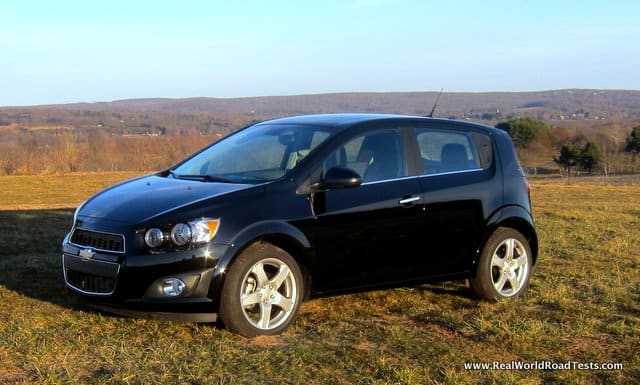 We didn’t know what to expect when we first learned that Chevy was going to lend us a new 2012 Sonic. After all, it replaced the Aveo, which was unremarkable in many ways. It was uninspiring, loud, and slow. It also lacked some modern safety features, and did not provide a driving experience that enthusiasts yearn for.

The 2012 Sonic is a whole new car from the ground up. Because of this, it was only fitting that Chevy decided to give it a new name that’s not associated with the car it replaces. They also gave it a new look, a new chassis, new interior and new powertrains. These new traits give the Sonic a more solid, playful, and youthful character that distinguishes it from the Aveo and other subcompact cars in its class.

Although the Aveo was assembled in South Korea, GM made it possible for the Sonic to be assembled in Michigan while still making it profitable to do so. In order to accomplish this, GM had to streamline the entire assembly plant. They made the factory more efficient by equipping it with more robots, by utilizing fewer workers, and by negotiating a contract with the Union Auto Workers allowing for a reduction in their wages.

The Sonic comes in two body styles, sedan and hatchback. The sedan is more conservative and mature in style. It’s also approximately a foot longer. The hatchback appears sportier and more youthful, and has a chopped rear end look. 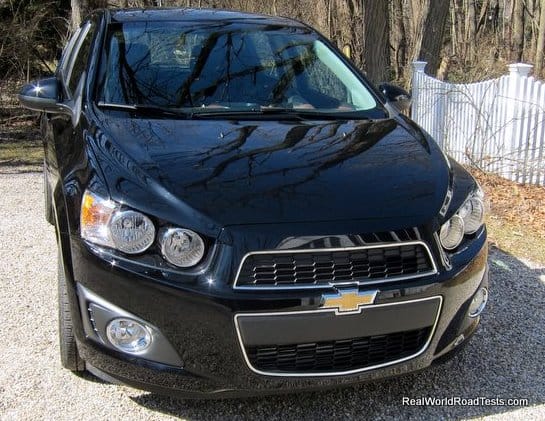 Overall, the look for our 5-door hatchback is pretty aggressive. In front, it proudly sports Chevy’s signature bowtie between a dual honeycomb grill as a bold reminder that this is an American car. The headlights and taillights were inspired by motorcycles with its exposed round headlight design. It also has a sculpted hood and character lines down the side for a look of motion. It wears 17″ 5-spoke painted aluminum wheels with Hankook Optimo H428 P205/50R17 H rated tires. In the rear, there’s a spoiler that cleanly flows off the rear roofline.

What stands out to me most about the 5-door hatchback’s design is its 3-door coupe-like appearance. The rear door handles are hidden in the c-pillar for smooth clean look masking the presence of rear doors while increasing the sportiness of the look, and retaining the ease of rear seat access characteristics of a 5-door. 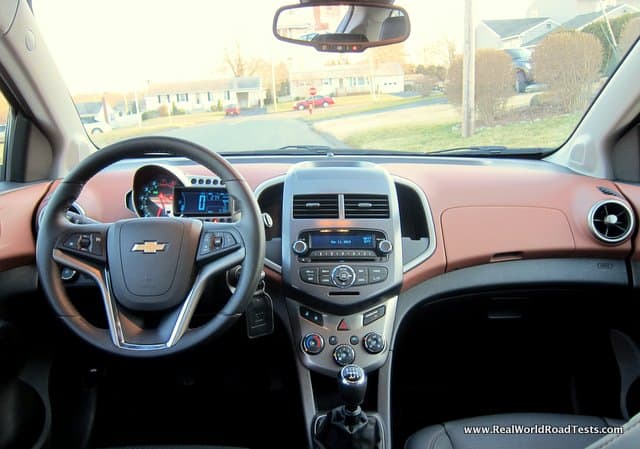 The Sonic’s cabin continues the motorcycle inspired theme of the exterior lights with an instrument display featuring a large, round analog tachometer conjoined with a large rectangular digital display that houses the speedometer, odometer, trip computer, and other information. This display appears a bit unusual at first, but we found that 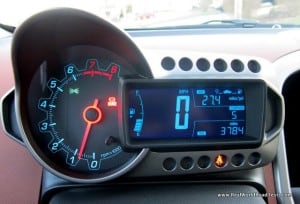 it enhances the Sonic’s character, and is very easy to read during the day or night. The dashboard is covered in textured hard plastics with a two tone color scheme and provides added character and class. The center instrument console houses the audio controls which are clearly labeled. The audio system has a decent quality sound for general use, but audiophiles would have no guilt swapping the whole unit for an aftermarket one. Just below the audio controls are the climate controls which are large rotary knobs that are very easy to read and operate. The tilt and telescopic leather wrapped steering wheel also mounts some controls such as cruise control, bluetooth for phone, and audio controls.

Chevy says the Sonic seats 5, but I’d like to see a picture of that. I consider it a 4-seater and no more. The car is just not wide enough to squeeze three in there, unless they’re young children and they’ll most likely need car or booster seats so fuhgeddaboudit. 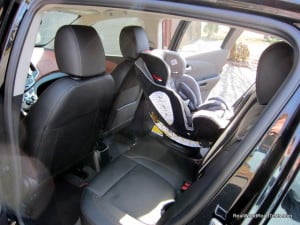 The front bucket seats are fairly comfortable but those with a wider frame may find the bolstering too narrow. Our Sonic came equipped with perforated leatherette seating surfaces. The leatherette is a nice touch in this price class and comes pretty close to providing the feel of real leather while keeping costs down. Heated front seats are a new addition and especially in this class are a welcome option. (Heated seats only come standard in the LTZ trim.) The seats are adjustable manually and include a height adjustment. Headroom and legroom in front are spacious. Even with a rear facing infant seat installed in the rear, a 6′ 1″ person could still fit in the front passenger seat fairly comfortably. The driver’s seat is equipped with a padded armrest, but the passenger seat does not come equipped with an armrest nor is there a center storage console for front passengers to rest their left arm on. The rear seats are flat, and provide no lateral support, but have more legroom and headroom than I was expecting in a subcompact car. With the front seat in a comfortable position for a 5’10” adult, a 6″1′ passenger was able to fit in the rear with reasonable comfort.

Forward visibility is pretty good. The windshield is big and the a-pillars don’t hinder visibility too much. However, there were a couple of complaints from our staff about dashboard glare in the front windshield under certain lighting conditions which was distracting. The glare comes primarily from the two color tones on the dash (there is also glare from the vents, but that’s pretty typical). I personally was not bothered by this, but did notice it when it was pointed out to me. Rear visibility could be better, especially in the corners. There is a fairly big blind spot in the c-pillars partially due to the placement of the rear door handles. Also, the rear window provides a short viewing range. A reverse camera would help in this situation. 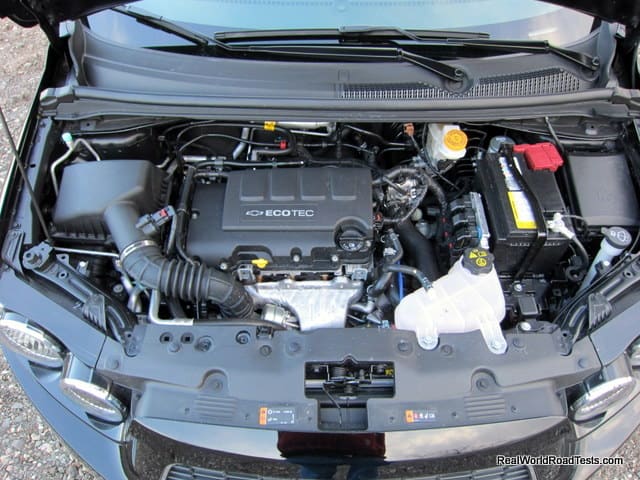 According to Chevy, the Sonic was “…developed first and foremost to be fun to drive – with ride & handling characteristics not expected in this segment.” Our opinion of this car is that it is fun to drive, especially when compared to the Aveo it replaces. In fact, I actually liked the car more and more each time I drove it.

The first thing that I noticed when driving this car was its heavy clutch. This is unfortunate for Chevy and for some potential buyers since someone test driving this car at a dealership may be turned off by this. Please note that for me, and our other editors who tested the car, we got used to this rather quickly and it did not bother us at all.

The Sonic we tested is powered by the optional Ecotec 1.4L turbo engine with 6-speed manual transmission rated at 138 horsepower and 148 lb ft o 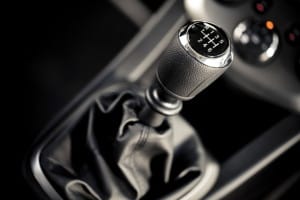 f torque. This is the same engine that’s used in the larger Cruze. Chevy claims the Sonic accelerates from 0-60 mph in 7.8 seconds. Our best time was a little slower at 8.3 seconds with the stabilitrak electronic stability control and traction control turned off. We find their time possibly achievable only in the absolute best of conditions, and even then good luck! The acceleration feels adequate, but doesn’t give you any form of rush you get from faster accelerating cars. When trying to accelerate quickly, it’s important to keep the engine in it’s peak powerband between 3,000 and 5,750 rpm. Otherwise your acceleration time will suffer. After approximately 5,800 rpm, it runs out of steam and loses power until the rev limiter cuts off engine at the 6,500 rpm redline. This was much more noticeable in first gear than in second gear. Despite the engine’s limitations, the Ecotec 1.4L is very competent and works just fine in normal use.

In casual driving, the manual shifter feels solid and had great shift action. When trying to make quick shifts though, the throws feel long. All Sonic models equipped with the manual transmission also come with standard hill hold. This is a nice feature designed to assist those who are nervous about accelerating from a stop in an incline and eliminates the initial rollback that can occur in non-hill hold assist equipped vehicles.

The Sonic excels in blending ride comfort with hand 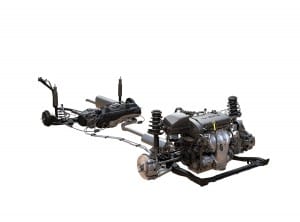 ling. The front suspension consists of MacPherson struts and the rear consists of a semi-independent, torsion beam axle. It does experience some body lean in heavy cornering, but we always felt in control and it maintained a level of fun. The electric power steering is sharp and well weighted. The ride quality was very comfortable, even over broken pavement, and is among the best in its class. Highway cruising is much more quiet and relaxed than in the Honda Fit. Engine and road noise are well reduced for a subcompact. Braking is also great. The front disc and rear drum setup with antilock brakes worked flawlessly. Our stops were short and straight with only some nosedive. Pedal feel was just right and provided good feedback. 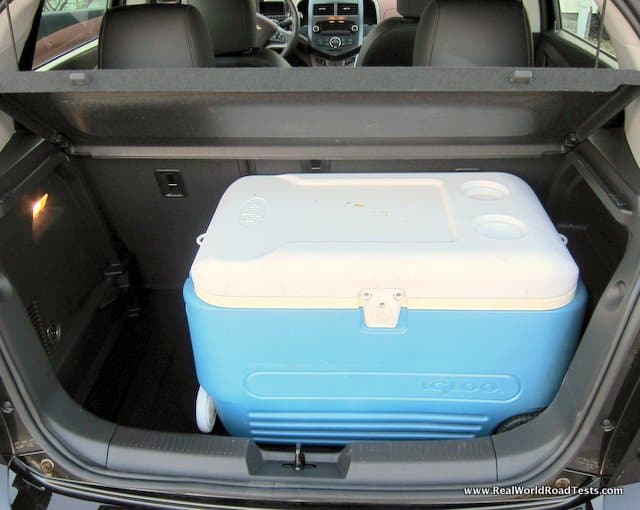 Storage in the Sonic is spacious for subcompact car standards and is versatile too, though it’s not as versatile 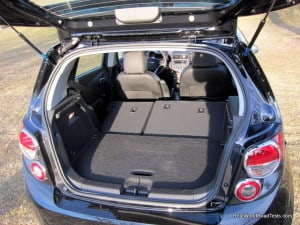 or roomy as the Chevrolet Silverado 1500. The latter would of course require a retractable cover like the ones found in https://www.peragon.com/shop/covers/Chevrolet/Silverado%201500 for safekeeping belongings. The Sonic has 19 cubic feet of trunk space. The trunk is expandable to 30.7 cubic feet with the 60/40 spit folding rear seats folded flat. The load floor is fairly high, but it’s removable and can store behind the rear seats. Other storage includes two glove boxes, the upper one includes USB and auxiliary inputs. There’s a shallow tray on the top center of the dashboard. Two other compartments are located on each side of the stereo receiver. A storage bin is located beneath the climate controls. There are 5 cup holders, and there’s a “nifty” parking ticket holder in the dash.

The Sonic is one of the safest subcompact cars sold today. One of the keys to this is its stiff body structure that’s made of nearly 60 percent high strength steel, and an engine cradle system that helps disperse frontal crash energy. It was named a Top Safety Pick by the IIHS. There are 10 standard air bags, electronic stability control, anti-lock brakes, electronic brake force distribution, and brake assist.

The Sonic is worlds better than the car it replaces and is the best subcompact car GM has ever produced. It’s practical, affordable, agile, fun-spirited, comfortable, relatively quiet, fuel efficient, and made in the USA. In addition to that, this car has no serious flaws. GM can finally be proud that it makes a car that rides with the best in the subcompact class and it should be definitely worth your consideration.

Styling: Pleasantly surprised by the overall exterior styling of the car, and love how the hatchback version blends in the rear doors. Inside the car, I like the multi-tone look which makes the less expensive materials not appear cheap. The one aspect that I personally am not fond of is the motorcycle inspired instrument display, but that’s subjective.

The Drive: First thing, get the 1.4 liter Turbo versus the 1.8 liter naturally aspirated engine. The additional $800 option to get the turbo is well the extra 23 ft lbs of torque that comes with it. While the Sonic isn’t a fast car, it responds well to being tossed into turns. It’s certainly more fun to drive than I anticipated it would be.

Chevy did a nice job taking an economy car, giving it a more upscale feel and making it an enjoyable ride.

Subscribe Today and Stay Informed When the Next Article is Posted!
Simply enter your e-mail address below then click on subscribe
(Your information will be kept private.)