The Silverado is the single biggest selling vehicle for Chevrolet, accounting for approximately one of every four Chevys sold. To say that this truck is important to Chevy is an understatement. As time moves forward, it’s necessary for Chevy to keep the truck modern without going too far from what attracts people to the Silverado. 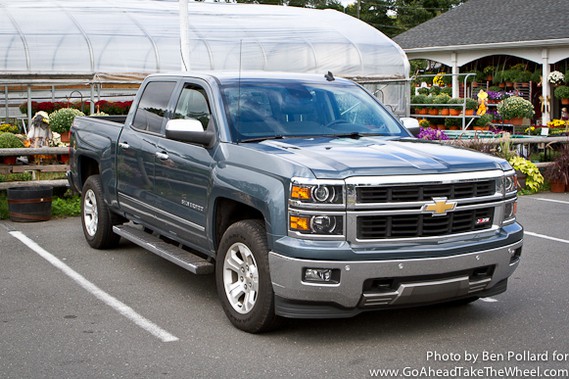 Truck owners are extremely loyal to “their” brand and once chosen, they are often bound to them for life. As a result, the goal with the new Chevrolet Silvarado was to target the Chevy faithful, taking the aspects owners love, and improving areas that they felt were lacking. This is exactly why the new Silverado doesn’t appear drastically different, at least on the surface. The reality is that Chevy needed to retain their winning formula, and blend the trucks heritage and looks with modern appeal, and most importantly, don’t screw up the good thing they have going.

2014 Updates
At a quick glance there doesn’t appear to be significant differences between the 2013 and 2014 Silverados, yet when taking a closer look one will realize there have been many upgrades. To summarize the upgrades, the 2014 Silverado was constructed to be tougher from a functionality standpoint, yet more refined inside the cockpit. 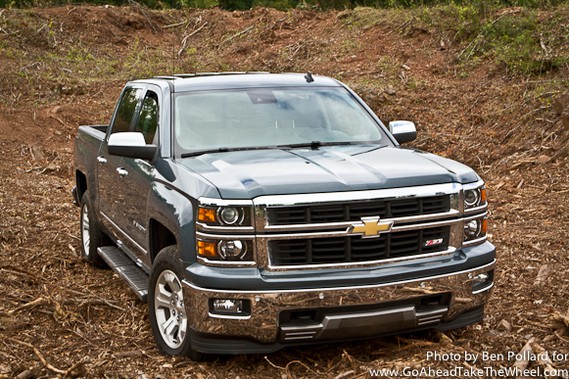 Starting from the front, a new aluminum hood is used to help shed some weight. Chevy also spent more time in the wind tunnel improving upon the aerodynamics which resulted in the truck to be designed with more curves that proved to reduce wind resistance. Improvements went even further even all the way down to the seams and welds now being hidden. 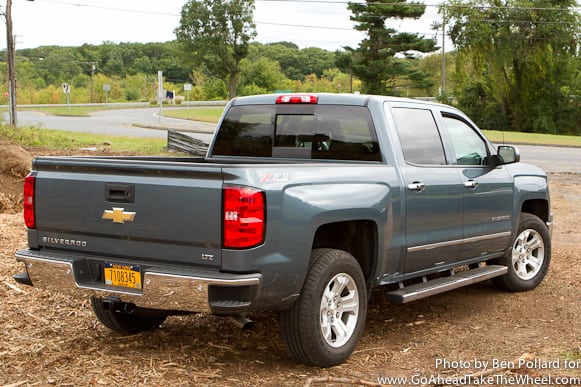 The bed has also seen improvements. The wells over the rear wheels are recessed, allowing owners to insert 2 x 4s and then a sheet of plywood to create a two-tier storage system. The tailgate is vastly improved over old pickup where it was heavy and required brunt force to close it. The tailgate was made lighter than the previous model and it now operates much more like opening and closing a car door. Disconnecting the gate cable over the latch stud, the gate hangs down which results in the rear facing camera to look down at the hitch area on trailers. Backing up to a trailer becomes a breeze and there’s no more getting out of the truck, adjusting, back in, rinse and repeat.

For the extended cab version, it now has external handles which eliminates the previous generation’s need to open the front doors in order to open the rear doors. This makes life easier when trying to put kids or whatever goodies you purchase in the back. 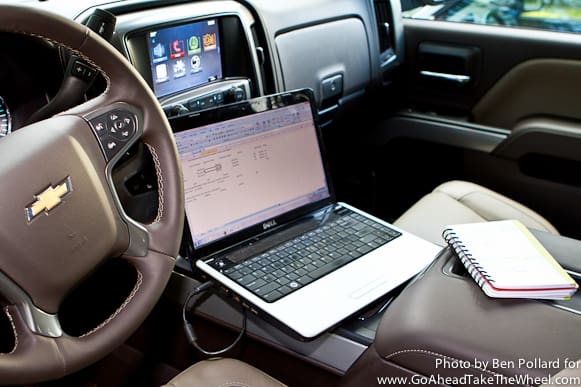 At a Corvette reveal event we attended, we met with the head of the interior design team who told us that we just have to see what they’ve also done with the new truck interiors. We’ve heard that line before, but they were absolutely right. This new generation Silverado interior now feels much more like a well appointed SUV than what some might think of as 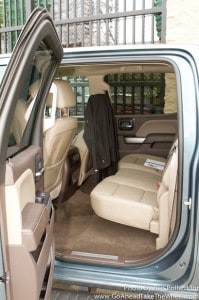 truck interior. It’s an environment where one feels at ease, relaxed, and comfortable. Need a mobile office? Well this most definitely fits that bill. Heated and cooled seats? Check. Heated steering wheel? Yup. The all important dual climate control? Absolutely. This truck is well appointed with the options we enthusiasts and our families would enjoy. Even the rear window that opens to the bed opens and closes via an electronic control that’s located on the front dash. Sounds minor, but at least for me in the past I would almost never open this window as when I thought about it, I was already on the road driving. It’s just one more nice touch incorporated into this truck.

When a friend began to explore the interior of the truck, she couldn’t believe all of the different storage areas and amount of room there was. She exclaimed, “OMG, there is so much storage room in here you could fit body parts!”

Well, okay, sure? Note to self; do not be left alone with her if she has access to any sharp objects. While she might be right, we quickly recognized the various items one might want 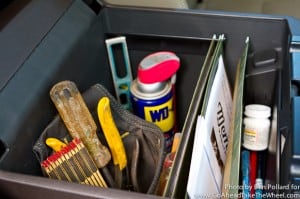 access to in this office space and how nicely they’d fit in. Sitting in the drivers seat, on your left are nice nooks for sunglasses and various small items embedded within the door. In the center console, there’s ample storage room. Places for coffee cups, note books, hanging file folders, a sunglasses holder, and much more. Looking to power up your devices? That certainly won’t be an issue! There are a total of five USB plugs, three cigarette power supplies, and a 110-Volt power outlet in the front of the vehicle. It sounds a bit like overkill, but I’d much rather have too many than too little.

Driving
Once again we felt as if we were in an SUV versus a rugged truck. The acceleration was smooth, and overall the ride was quite comfortable. The model we were testing was equipped with the off-road LTZ Plus package and as a result, the suspension felt a bit soft and bouncy at times. It wasn’t bad by any means, yet it felt like there was some compromise to attain the off-road worthiness status. Handling was good; not great as expected with a truck. Compared to other trucks in its class, it was right on par.

One of the biggest items we noticed when driving was just how quiet it was inside the cockpit even at highway speeds. The engine, exhaust, and wind noise were all kept to a minimum. Some truck goers might find even it too quiet, but not to worry as you can easily change the exhaust buy purchasing an aftermarket system to accommodate a more powerful sounding truck if you desire. Yet, quiet sophistication is what this truck is built for.

While trucks certainly aren’t small and can be a pain to navigate in parking lots, Chevy did a nice job to mitigate this. The truck has accident avoidance features which also are valuable in crowded parking lots in addition to on-road driving. When pulling into a spot, you won’t have to simply guess how close you are to the vehicle in the space in front of you. On the road, the system warns drivers by displaying a red light on the front windshield if it thinks one might need to brake and a subtle seat vibration along with an audible warning if you begin drifting lanes. Fortunately there are multiple sensitivities to fit your temptation of being distracted.

Towing
Towing is made easy right out the gate with an easy to reach trailer sway control unit. As mentioned before, to make attaching a trailer a breeze just put the rear gate down, put the 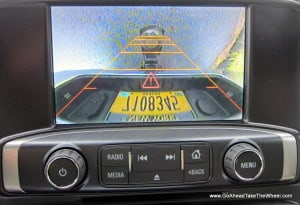 truck in reverse and now the MyLink screen is perfectly aligned showing the hitch. Under tow, the truck handles the load as expected. The Silverados equipped with the 4.3L V6 have a tow rating ranging from 6,300 lbs to 7,200 lbs depending up the configuration and Silverados with the 5.3L V8 ranges from 9,100 lbs to 10,200 lbs.

Fuel Mileage
In order to help fuel economy, the truck uses cylinder deactivation when under light loads and at a constant speed, particularly on the highway. It essentially turns the truck in to a four-cylinder engine. While on the highway, I almost didn’t notice that this was happening. The EPA fuel consumption ratings of the truck are 16 mpg city, and 22 mpg highway which represents fuel economy that is at the top of its class.

Pricing
Although the truck has seen numerous improvements over the past generation, the base prices for all three configurations carry over from the 2013 truck to the 2014 truck. So why would anyone purchase a 2013 with all of these new improvements for 2014? Ah yes, rebates! In order to get the older Silverados off the lot and keep interest high in the 2013 model, some rebates are going as high as $9,000. Makes that decision a bit tougher, doesn’t it?

Buyers of all 2014 Silverados will also receive a standard scheduled maintenance program for the first two years or 24,000 miles, whichever comes first.