As we approached the track, our GPS system was telling us that we were only a few hundred feet from the track. Then we begin to see something which looked remotely like a track but much like a go-kart course. It had a blinking billboard stating Track Entrance so it must be the race car track we were looking for. Regardless, we were happy to have finally arrived. Good thing too because it was time for a potty break. At the gate we asked where the nearest bathroom was, and were pointed to the nearby building It was a bit odd as outside of the restroom building, there was also a Porto Potty. My friend ventured into the restroom building, and quickly came out suggesting that I use the Porto Potty. Silly me became curious. How bad it could be? Two of the bathroom stalls had signs stating “Keep Out” and along another wall there was a wooden troth urinal. Prior to attending this event, a few friends forewarned us that the track was a bit “rough” but still a fun track to drive. We were quickly able to confirm that the stories of the tire walls being built by a bucket loader dumping tires into a pile were not exaggerations.

For this 25 hour, 25 minute and 25 second endurance race where a total of 74 cars were entered, I was driving with team Mod Squad racing two 1991 Toyota MR2s. The format for this team would have eight guys each driving a two hour stint in both cars. If you’re unfamiliar with ChumpCar, the premise of the series is to provide people an affordable way to race cars and have fun. According to the rules, each car is to be valued at $500 or less (not what you paid for it) not including safety gear such as the roll cage and other equipment. The cars also need to be outfitted with DOT 190 or higher tread wear tires.

Walking around the paddock lended itself to seeing a diverse array of interesting vehicles and creative themes. Some of the cars I couldn’t help but think there’s no way they could possibly be bought for $500 plus whatever for safety gear while others genuinely fit what I would envision a $500 car looking like. 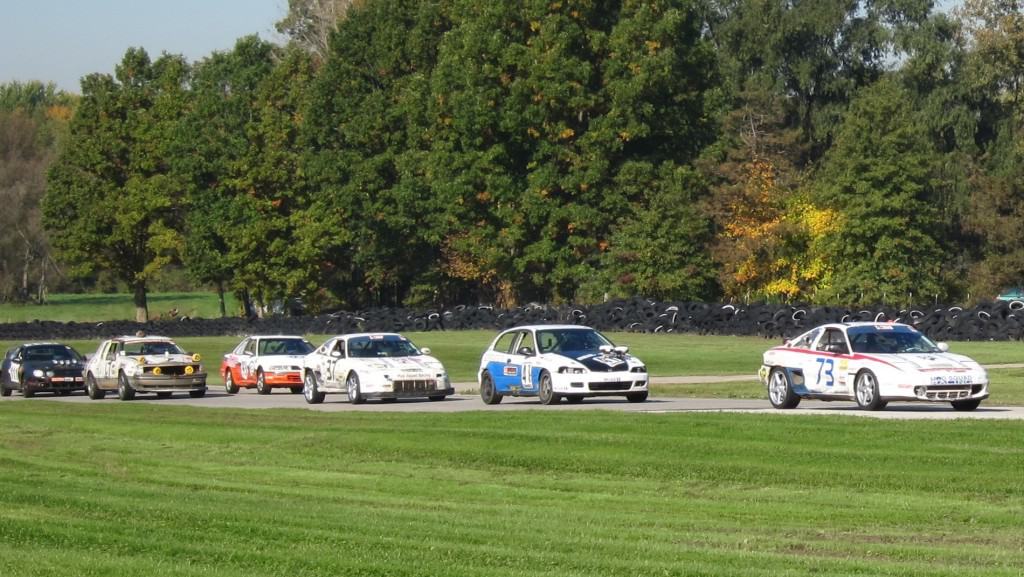 Since this was our first time at Nelson Ledges, we decided it would be a good idea to walk the two mile long track when allowed. As you might imagine based upon the above description, the track itself was narrow, bumpy, and could use a repaving. If one were to go off track, many of the sections were sloped down hill toward the tire walls. This was necessary because much of the area off track was essentially wet lands from what we could see and the elevation change was an attempt to keep the track dry. Even with the track conditions being less than ideal, the course configuration looked like it would be fun to drive. With the drivers meeting quickly approaching, we opted to skip walking the last two turns of the track which appeared pretty basic.

What happens when the tow truck gets stuck?

Wisely we decided to stay at a hotel that night knowing that during the race, little sleep would be had. The only issue was that there were three guys and two queen sized beds. None of us wanted to sleep on the floor, therefore the big debate began – how can we fairly decide who would get their own bed. My two friends who joined me on this trip are both engineers and one has a statistics background, which made the lottery system even more comical. I’ve learned from my Three Guys and a Hammer episode and decided that calling the front desk to ask them which two guys should sleep together wouldn’t be prudent. After having fun talking about the various systems to select the winner (it should have been simple, right?), I ended up winning. With me normally sharing a queen sized bed with my wife, a three year old boy who often “sneaks” in and somehow lies horizontally across, a tiny cat who some how takes up quite a bit of room, and a dog who pushes her way onto the bed – winning the lottery was wonderful.

My first stint driving out on the track wasn’t until 7:30 pm where I’d get to experience driving in darkness. This is something I was looking forward to. During my first lap, other cars zipped by as I attempted to make my way around. Remember how I said that we didn’t finish walking the last two turns? Yeah. I reached that part of the track and it was really tough to see! I decided it was time to turn further to the right after I made my way off track and into the grass. Note to self, walk the entire track next time if in a similar situation or at least study videos much more.

During the first 45 minutes, I found it quite challenging to say the least and even called in 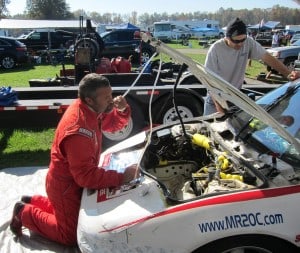 on the radio referring to myself as a rolling chicane. In one of the sections of the track (the carousel) I found myself going down the grass slope off course approaching a tire wall. Though out the day, we had been experiencing overheating issues with the other MR2 and all I could think about was trying not to kill this car. It’s amazing how everything slows down to a crawl in ones mind as you veer off course. Somehow I was able to flick the car around, didn’t lose momentum as I climbed the hill now heading toward traffic, then got it going in the right direction again. I merely radioed in that I went off course a bit, and was instructed to stay out if everything was okay. Wow, that was close! After a while I recognized that I was spending too much time trying to be out of everyone else’s way, that I was making it tougher on myself. Quickly things became much easier and I absolutely fell in love with driving at night. When they called in and told me it was time to pit for the driver changed, I was pretty bummed.

At around 11:30 in the evening, our car came back into pit lane for another driver change and refueling. As part of this, it’s required that someone man a relatively large fire extinguisher. We completed the process and I made my way to the pit wall with my team mates until one of them accidently knocked over the fire extinguisher that had the safety pin out (as required during fueling). I learned that the chemicals that come out are cold, getting sprayed in the mid section isn’t refreshing, it produces a large amount of dust, and as you might imagine has an not-so pleasant aftertaste. Fortunately no one was injured and we were able to laugh about it as a huge cloud of dust made its way across the track. While we began to clean up the mess ,one of our neighboring teams, Bio Hazard, asked me if I’d mind being their fire extinguisher guy.

“Really? Did you not just see what happened?” I asked.
“Yes, we saw that.”
“And you still want me to man your fire extinguisher?”
“We’ll have to take our chances.”
They were obviously very desperate.

Throughout the day and evening hours, numerous cars dropped out of the endurance race either due to mechanical issues or on-track incidents. We were able to continue driving the MR2 that was experiencing overheating issues, driving it for short stints, then going into the paddock to let it cool off and bleed the cooling system. It was a bit odd as the car would run just fine for 45 minutes, then all of a sudden would spike in temperature. Although we thought this car might eventually drop out of the race, it turned out that the other MR2 didn’t survive the night and ventured off into a tire wall ending its race. The over heating plagued MR2 saw the checkered flag which was a moral victory for the team even though we were numerous laps down.

Event thoughts: The team was great to be a part of and I thoroughly enjoyed having the opportunity to drive during the night. I will reserve many of my comments about ChumpCar on-track antics because everyone I speak with has said this event was an exception and normally it’s much different. The little I will say about this event is some people 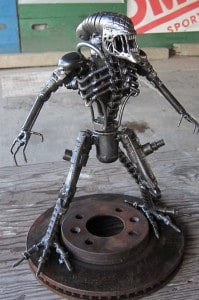 One of the coolest trophies I've seen

were way too aggressive, stupid really, and several didn’t demonstrate respect for others on-track. There was no reason for the amount of car-to-car contact that occurred and it was only by luck that no one was injured during the race.

One of the several things that surprised me about the event was how fast many of the drivers were and some of the people it drew. While certainly not the norm, I did not expect to see professional drivers participating (not talking about gentleman drivers as discussed in the Dark $ecrets series of articles). There were also many SCCA licensed racers who were entered into the race. Just because these were “$500 cars” does not mean they weren’t being driven extremely hard and fast.

Overall I really like what ChumpCar is doing and hope they can retain the grassroots format. As they continue to grow in popularity, they’ll have some challenges to overcome. If you’ve been on the fence of whether or not to give this series a try, my recommendation is to go for it. I know that I’ll be back again – it’s okay to call me a Chump.