The path for most professional athletes in sports such as football, basketball, and baseball, typically includes a person who was born with great talent, and through hard work reached a professional status. In general, their financial resources didn’t play a significant factor of whether they could turn pro. There are numerous stories where a person played a sport in high school, their talents shined, then they went on to get a college scholarship where again, with hard work they were able to showcase their great abilities. From there they either played in the minors or were drafted onto a professional team. While that’s certainly not the path for each person, the general map to becoming a professional athlete in these sports are there. Then once they’ve made it into the professional ranks in these types of sports, they are guaranteed to at least make a “modest” league minimum. The lowest of the league minimums among the pro sports mentioned was $325,000 for a first year player in 2010. This is not how it works in professional road racing.

Have you ever watched races and wondered how some professional drivers made it? I mean, they’re off the pace of many other drivers and are making some questionable moves (to be polite). Why is it that some highly regarded teams have a fantastic driver and yet the teammate is less than stellar? As one begins to look at lap times and peoples’ backgrounds, you can begin to piece together what’s really happening in professional road racing.

This reality hit me hard a few years ago when I spoke with a World Challenge team about the path to professional road racing. In order to have a shot of driving with them, it would first be necessary to prove that you are an extremely fast and talented driver. In addition to looking at your previous racing history and resume, they would have you complete a test day to ensure that you are more than capable. If you are good enough, you’d then be given an opportunity to drive for the team. Up until this point, all of that made sense to me. Then they discussed the financial side of things. For this team it was around $30,000 per race, but after all, it was with a competitive team where the car is able to run up front. Oh wait! You do realize that is how much that ride will cost you, right? The reality is that many “professional” racers are actually paying to drive. The true numbers are tough to uncover but it’s estimated that approximately 45% of the professional drivers in GRAND-AM’s Rolex series, 55% of the Continental series, and 55% of the SCCA’s World Challenge series are paying to race. These figures are on the conservative side and in reality the percentages of racers paying for a ride is higher. Then, of drivers who do not fall into the gentleman driver’s category (paying to drive), many are just getting a free ride and are not actually earning a salary which puts food on the table. Often times as a part of this, these “pro” drivers are required to pay for their own transportation and accommodations.

The percentages of drivers actually getting paid a salary continue to go down from there. For the limited number of drivers getting paid, extremely few are able to rely on that as their sole source of income. If you take a look at various teams, the drivers and their family backgrounds, you’ll begin to discover how many of these drivers come from money or are somehow bringing the money to the team or serving as coaches to gentleman drivers and essentially earning their salary that way. The phrase I heard over and over while speaking with teams and drivers was “if you want to race, you pay! It’s really that simple.”

All of this is not meant to say it’s impossible to become a paid professional driver, but it is important to know the realities going into this venture. There’s no easy way to sugar coat this, and we wouldn’t be doing you a favor if we did. The blunt truth is that money talks, and talent walks. However, there are a select few drivers including Eric Curran, who were able to make their way from Club Racing to becoming paid professional racers without spending a significant amount of their own money.

But first we will look at the gentleman driver and costs for a ride on a professional team, after all, this represents the significant portion of the pro rides out there. Going forward we will refer to a driver who actually gets paid or at least is getting a free ride as a professional driver and one who is paying for their ride as a gentleman driver. Below is a brief summary of the GRAND-AM and World Challenge series, their racing categories, and associated costs. (The costs listed covers the rental cost of the car and other associated aspects of the team such as crew. The rental fee is for each driver on the team that they are charging.)

GRAND-AM is regarded as one of the best pro racing organizers in the U.S. and continues to grow in popularity. In both of their series, at least two individuals must drive under green flag conditions, making one or more driver changes mandatory. The monetary figures listed below are for one driver on the team. These numbers exclude the Rolex 24 race which has a higher cost associated to participate in the event.

GRAND-AM Rolex Sports Car Series
In this series, there’s a higher percentage of paid professional drivers than the others discussed below with an estimated 55% being professional drivers and the remaining 45% gentleman drivers. This series is made up of Daytona Prototypes and Grand Touring categories.

Daytona Prototype
Although each chassis is designed and manufactured independently, competitor modifications are highly limited by GRAND-AM rules. Certain parts, like rear wings, are mandated by the series. 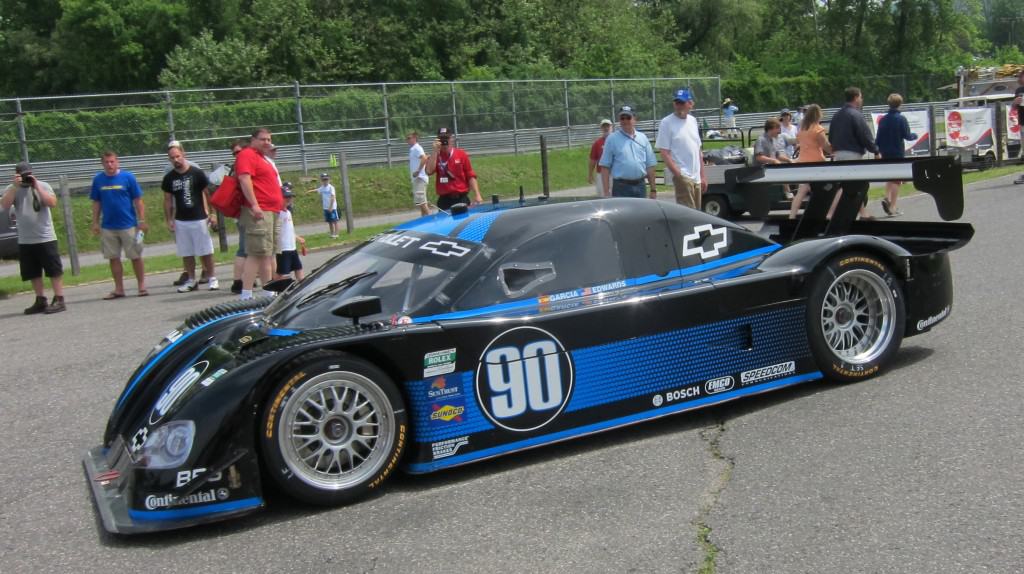 Racecar Cost: Approximately $400,000.
Performance: All Engines are tuned to produce approximately 500 horsepower and have an approximate top speed of 195 mph.
Event Rental Cost: Starts at approximately $55,000 and quickly goes up from there.
Season Cost: For a team to run a season, costs ranged from around $3.5 million for a good car to $4.5 million for a car capable of winning.

Grand Touring (GT)
GT is a home to production-based racecars that are similar in appearance to the latest high-performance sports cars. Don’t be fooled though, these are not being raced in the shape you’d see on the showroom floor. GT is a mixture of U.S. produced muscle cars such as Chevrolet Corvettes, Ford Mustang Cobras, and Pontiac GXP Rs competing against international cars such as Porsche GT3s, Mazda RX-8s and Ferrari 430cs. 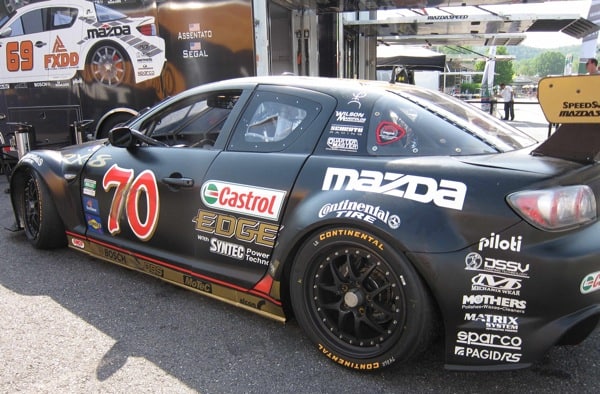 GRAND-AM Continental Tire Sports Car Challenge Series
This is a support series to the Rolex Sports Car series and events are typically held on the same weekend. In years past there were many more gentleman drivers in these classes, especially ST, but that model is changing. Since professional drivers are already at the track participating in Rolex Sports Car Series races, teams have found it much easier to entice these pros to drive their cars as well. The benefit to the team doing this is having a greater chance of winning races or at least being closer towards the front of the pack.

Grand Sport (GS)
The Grand Sport (GS) class is made up of several high-performance cars with minimal performance modifications, but full safety systems. Engines are tuned to produce between 375 and 425 horsepower depending on the car, and competition is further equalized by vehicle weights. The class features cars such as the Porsche 997 and Cayman, Nissan 350Z, BMW M3, Subaru WRX, Audi S4, Chevrolet Camaro, Ford Mustang GT, and Dodge Challenger. 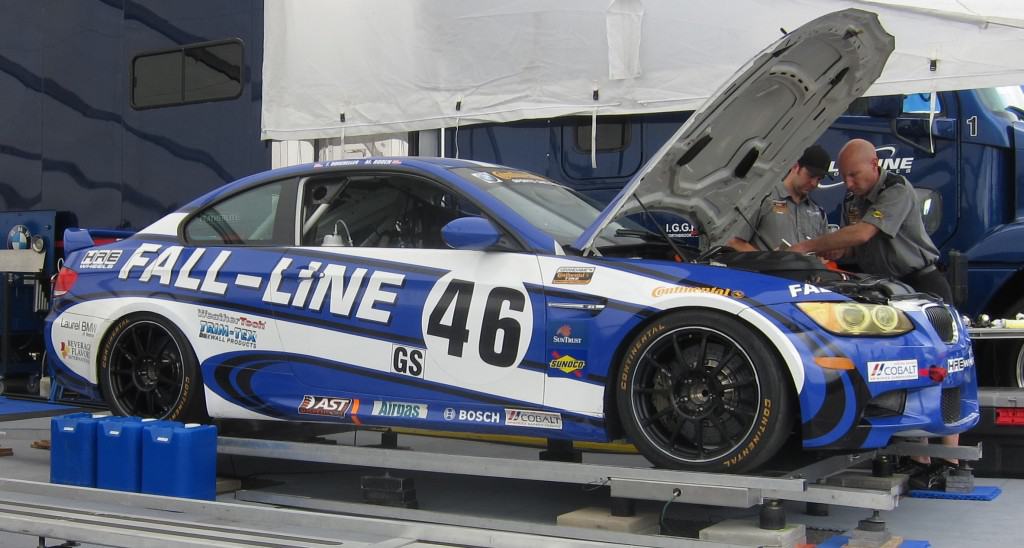 Street Tuner (ST)
The Street Tuner (ST) class features high-performance compact cars. Unlike the GS class where V8s are allowed, ST is limited to four and six cylinder engines, although turbocharged and supercharged models are permitted. Engines produce between 170 and 240 horsepower depending upon the car. Popular models in this class include the Mazda RX8, Mazda MX-5, Chevrolet Cobalt SS, Acura TSX, Subaru Legacy, Mini Cooper S, BMW Z4 and Volkswagen GTI. Similar to the GS class, only major modifications allowed in ST are in the area of safety. 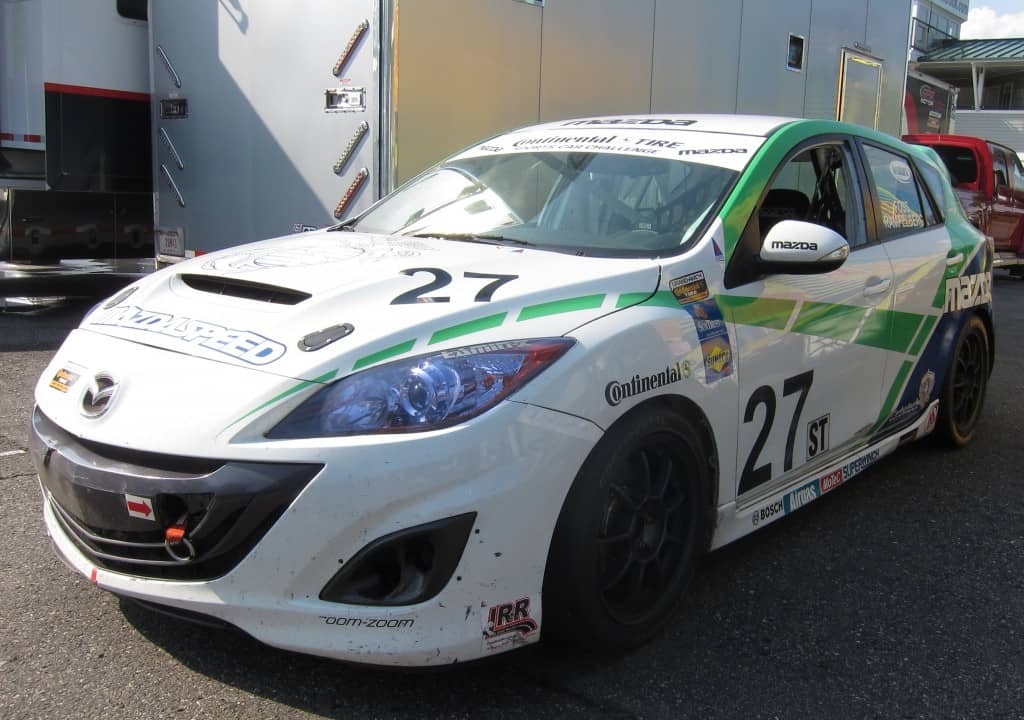 SCCA’s World Challenge Series
This is another popular road racing series in the U.S. With this series, there is a 50-minute maximum time limit for every race, with the number of laps and total distance being determined by track configuration, lap times and race conditions. Being a shorter sprint race, there is only one driver per race.

Grand Touring (GT)
The cars permitted in GT are typically sold in the market as “sports” cars, “sport-touring” cars, or performance versions of “luxury” cars. Forced induction is permitted on cars that come equipped that way stock, or on cars that SCCA Pro Racing has determined need help reaching the target horsepower range. All of the vehicles in GT are rear-wheel drive or all-wheel drive. 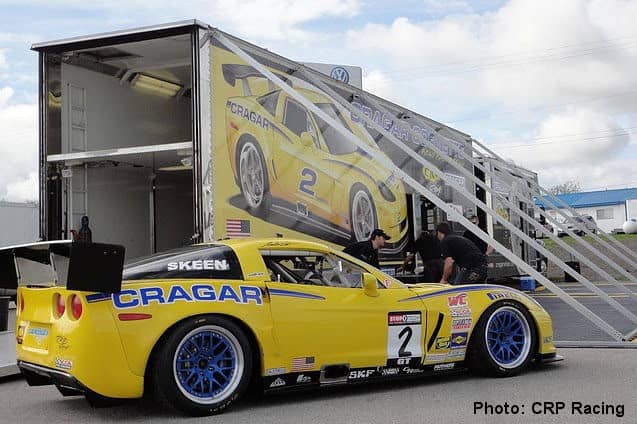 Performance: Engines are tuned to produce between 425 and 525 horsepower. Top speed is 162 mph.
Event Rental Cost: The estimated average cost for a weekend is $30,000.

Grand Touring Sport (GTS)
Includes many cars eligible for the GT class, but at a preparation level much closer to that of a stock vehicle. 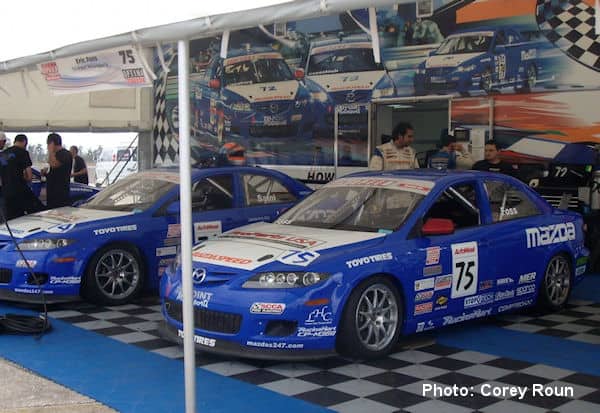 Performance: Engines are tuned to produce as much as 400 maximum and as low as 290 horsepower. Top speed is approximately 140 mph.
Event Rental Cost: This is a new category therefore there was a limited amount data on rental costs, however, the estimated rental cost for a weekend seemed to be between $20,000 – $25,000.

Touring Car (TC)
The cars permitted in TC are typically sold as “compact” cars, or “touring” cars. Eligible cars must have realistic seating for four (4) adults when sold on the showroom floor. Front-wheel, rear-wheel and all-wheel drive configurations are permitted. Forced induction may be allowed on cars that have forced induction systems available from the manufacturer which do not void the factory warranties. 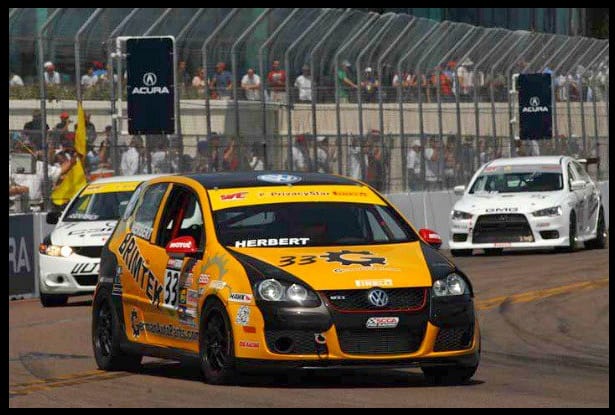 Performance: Engines are tuned to produce between 180 and 200 horsepower. Top speed is approximately 140 mph.
Event Rental Cost: The estimated average cost for a weekend is $15,000.

We chose not to divulge much into the American Le Mans Series in this article from a driver’s perspective because it is typically even tougher to become a paid professional racer there. The LMP Le Mans Prototype and Grand Touring (GT) categories consist primarily of factory drivers from around the world, which makes the fight for a job even more competitive. (A factory driver has their salary paid by the manufacturer and drives on a factory sponsored racing team.) The series recently added two categories much more geared to gentleman drivers – LMPC Le Mans and GTC. Here’s just one example – when I think about Corvette Racing, I immediately associate it as an American manufacturer and tend to root for the team partially on that basis. It’s interesting to look at their driver line-up as of 2011: Jan Magnussen from Denmark, Olivier Beretta from Monaco, Richard Westbrook from England, Antonio Garcia from Spain, Oliver Gavin from England, and Tommy Milner from the U.S. Five out of six drivers are from countries other than the U.S. So not only are you competing against other drivers in the U.S., but throughout the world.

We did meet with Duncan Dayton who is the owner of Highcroft Racing and will discuss what it’s like being a part of a team at their caliber later in this series of article.

Next article: “When Things Go Wrong”