Keeping Your Cool Inside the Racecar – Cool Suits and Vests

It’s damn hot outside! You’re now sitting inside your racecar on grid which makes it even hotter then to make things worse, you’re wearing a full Nomex racing suit and a helmet.  Immediately you feel the sweat begin to build up, are uncomfortable and just want to get on with the race. A part of you wishes you didn’t remove the A/C from the car as you sure wouldn’t mind having some cool air directed towards you. Did I say it’s freaking hot? Finally the five minute warning is announced and you’re directed out onto the track. Adrenaline kicks in and you don’t recognize the heat anymore. Although after the race, you’re completely soaked in sweat. Nasty! All you can think about is getting into some clean, dry clothes. Most of us know this feeling all too well and it’s not pleasant but can mostly be avoided.

Replaying a few silly mistakes you made out on track, you wonder if the heat might have gotten to you and been the cause. It’s certainly possible. In 1968, a NASA study concluded that when the air temperature is over 95 degrees F, you can make up to 60 mistakes per hour without even realizing it. The reason why this happens is when the ambient temperature reaches 95 degrees F, almost half of the blood moves to the skin to produce moisture in the form of sweat which naturally cools the body. This causes the rest of your body’s organs to operate on much less blood, interfering with your cognitive thinking skills. More drastic is when the core body temperature exceeds that by just a few degrees (99 to 103 degrees F), you go into heat exhaustion. Beyond those core body temperatures can lead to a stroke. When thinking about temperatures, keep in mind the safety gear you’ll be wearing and how it’s meant to insulate you from a possible fire. This also means it retains heat inside of the racing suit.

In racing where we fight hard for tenths of a second out on track, these minor mistakes (hopefully) add up quickly. Battling heat is important and can give you an advantage over your competitors. You’re not a wimp for using one; I think you’re smart. Admittedly when I’m on grid with you in my racing class and see you don’t have one on a hot day, I’m glad.

Hydrate
We won’t go in-depth about this topic now but you should be well hydrated before the race. Drink at least 16 ounces of fluid (sports drink, juice, or water) a few hours before the track session and another 8 ounces 30 minutes before. Doing this will help prevent dehydration and help sharpen your focus while you’re inside the car.

Being in Good Physical Shape
A person whose in good physical shape will absolutely be able to cope with heat better than someone whose not. Additionally, this will help you in many other positive ways both inside the racecar and out. Sadly this doesn’t come as easy as reaching into our wallets, but it is a key component that can not be overlooked. Okay, fine. We’re here to talk about simpler stuff and recognize that even the most physically fit person will fall victim to heat exhaustion.

Cool Vests
For years I looked at pre-built cooling systems but had a hard time justifying the expense. Last year a friend referred me to a company, Glacier Tek Inc, which sells something called a cool vest. For only $179 and based on their recommendation, I had to give it a try and am so glad that I did. The basics of it are pretty much like it sounds – it’s a vest you wear inside of your race suit that keeps you cool. 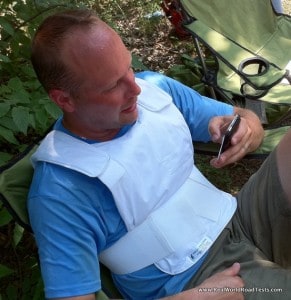 No, I won’t take it off! Nice and relaxed after a race in 100 plus degree heat

In the vest there are pouches which you insert the Renewable Phase Change Material (RPCM) cool packs. The RPCM packs are made from high-technology processed fats and oils, which are classified as “food grade” by the FDA. This was important to me in the event my son or dogs somehow cut one open and became exposed to them – or myself for that matter. (Note: The useful life of these packs are indefinite.) There are other similar products on the market but many contain hazardous chemicals. Unlike water which would be too cold, this maintains a comfortable 59°F so that you’ll stay cool and comfortable at a temperature which feels natural to your skin and body. While I wear a cotton shirt underneath it, the vest can be safely and comfortably worn directly against your skin.

To recharge the packs, put them in ice water for about 20 minutes. If you put them in a freezer it would take longer to charge since it would be chilled convectively versus a conductive method. What I suggest doing is purchasing a medium sized cooler to be used exclusively for the cool vest and fill it with ice and water. My first weekend using it I made the mistake of putting the cool packs in the cooler with the yummy beverages. Since the packs were sitting on top of bottles and cans, the material in the packs did not form flat and was more uncomfortable while wearing the vest. 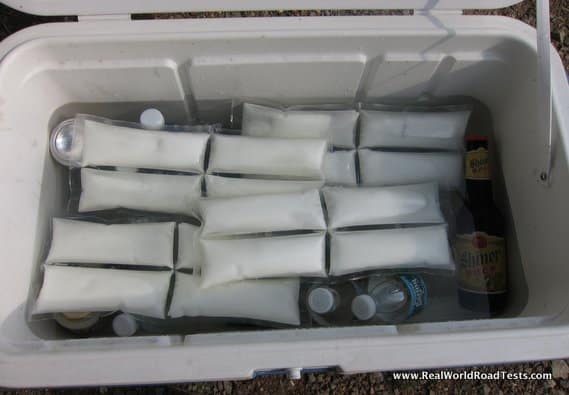 Pros: Nice and simple. The cool vest doesn’t require an ice box to be mounted in the car, wiring, or any other assembly. Can be used in many situations such as closed wheel cars, open wheel cars, corner workers, even at home mowing the lawn. If have a car where you need to keep weight to a minimum, this version is also lighter than a cool suit system (weighs less than five pounds). I have been using a cool vest from Glacier Tek, Inc. for over a year now and swear by it. Seriously, you’ll appreciate the $179 investment the first hot day you wear it.

Cons: While it has no problem lasting an hour or a bit more, since a racing suit traps heat it won’t keep you cool as long as stated it will for other uses. This primarily comes into play if you’ll be in an endurance race where your stints will be 2 hours or more. This also assumes your enduro race team will replenish the cool box with ice, otherwise each driver using a cool vest could be a better option.

The vest you’ll want is the Concealable Cool vest seen here. Give Tom Swiney a call at 1.800.482.0533 to either place your order or ask any other questions you may have. (We get no compensation for this endorsement; I just truly like their product this much.) Their website also has other interesting information pertaining to Cooling the body such as how the body cools, and the dangers of heat stress. 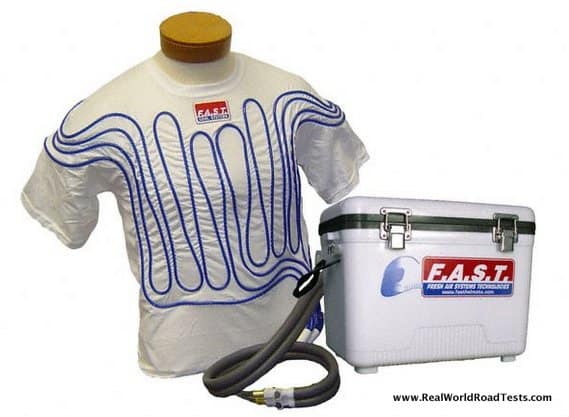 One option is to purchase a pre-built cooling system and what most people think about when thinking staying cool inside of a racecar. For a basic unit, they start at just over $450 which includes a cool shirt, cool box and everything else you’ll need. The entry level systems will keep you cool out on track for about an hour. More expensive systems could are a good option if you happen to run endurance races and need it to last for longer stints. The guys over at OG Racing can answer all of your questions about the various versions they sell which can be seen here. (Yes, they help us keep this free resource going and greatly appreciate your business.)

DIY Cooling System
Another option is the DIY route of making your own system. I admit to being too lazy and wondered what I’d screw up when building it, therefore the cool vest option was right for me. While I personally have not built the below system, many people have done so with success.

Ron Earp was nice enough to share his DIY instructions on how to build a cool suit system. His goal is to outline the components and then give you sources to buy them.

A basic system consists of:

The first thing you should get is a cool shirt which costs around $150 and can be purchased from our friends at OG Racing here.

Once you have the shirt, that will define the dry break connectors you need. More than likely they will be the ones shown on this link: Quick Couplings .  They are also available via other sources such as: Colder.com and McMaster-Carr.

Bear in mind what you want to do is have hoses mounted in your car that are more or less fixed in place that you can plug your shirt into. Once you have the shirt and dry break connectors, you just need to engineer your cooler box location, mounting methods, type of pump to use, and put it all together. I used a small beer cooler as shown in the photos below which works well. I added a gate latch to the cooler so that it’ll be positively latched and I won’t have problems with water coming out of the top of it. Another cooler option is the one shown here ($42) that already has the latches on it. 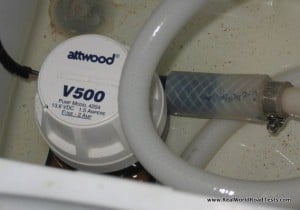 The pump I have shown there is a $10 Walmart bilge pump and it works like a champ. I have it wired to a switch and 5 amp breaker on the dash. Another option some people have used is this pump ($21).

I have the pump connected to additional dry break connectors in the lid of my cooler, but this is not necessary. You could simply make holes in the lid for the hoses to pass through and use silicone to seal around them. You might need some additional hose of various inside diamaters to make sleeves to get your hoses to attach to the bilge pump. The water return is just a hose coming into the top of the cooler. Hoses can be purchased at your local home improvement or plumbing store. 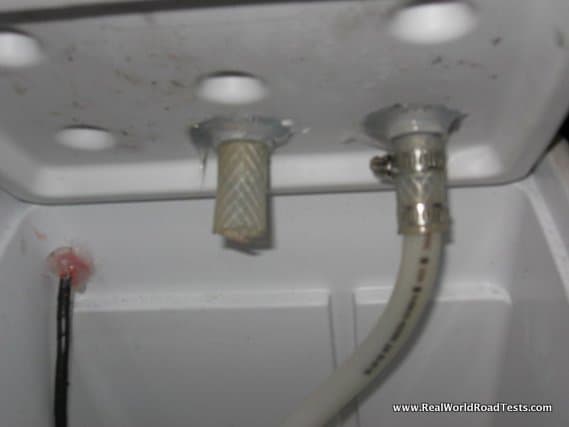 You can strap your cooler system in if you like, but I bolted mine in place and insulated the bolts so that they don’t become heat transfer devices to the chassis. I made one additional “modification” and attached a drain hose to my car. At the end of the weekend I can unplug the output hose from the pump and plug this hose in and then turn the system on. This hose will allow the system to pump itself out to the drain under the car. 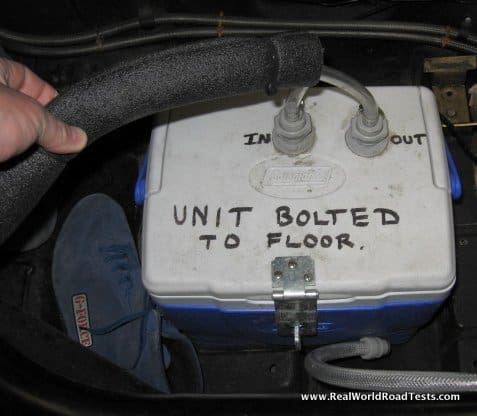 When running the system I fill it about 1/2 to 3/4 way full with ice/water. My system seals pretty well, but it could be better. I decided to run a small bead of silicone or caulk around the top of the cooler with the lid open and let it dry. That formed a compressible seal which should make it good and tight.

Oh, and I don’t have the fancy insulated hoses that come with the high buck systems so I wrapped the hoses with insulation purchased from the home improvement store.

And that is about it – pretty simple huh? More or less a fun little project you can do on your on with household materials. The system I have cools as good as the $450 system (told to me by those that have driven my car and own the $450 systems) but the total expenditure, including the shirt, was under $250. It has enough capacity to keep you nice and chilly for at least a 45 minute race, which is about perfect.