2011 Toyota 4Runner: Why Does it Have a Cult-Like Following?

A Rugged SUV Ready for Adventures 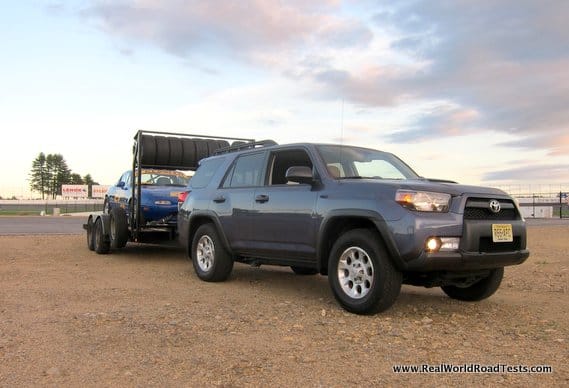 Back in 1984, Toyota brought to market at vehicle with mechanicals based on their popular four wheel drive pickup truck. In fact, the early 4Runner was little more than that pickup with a fiberglass shell over the rear cargo area. The emphasis was on utility, versatility, and the ability to traverse off-road environments. The Toyota 4Runner is now in its fifth generation but still built on a body-on-frame (truck) platform. As a result, the ride is harsher and less polished than many of its competitors built with a unibody frame. Yet the 4Runner still has a cult-like following. Why is this? I didn’t fully get it, at least initially…

The bold, aggressive appearance of the vehicle really grabs attention. Instead of just blending in the various elements, the 4Runner features pronounced components such as angular front and rear headlights, the hood scoop, and rear spoiler. It has a contemporary look, yet still is in keeping with the previous generations’ heritage. 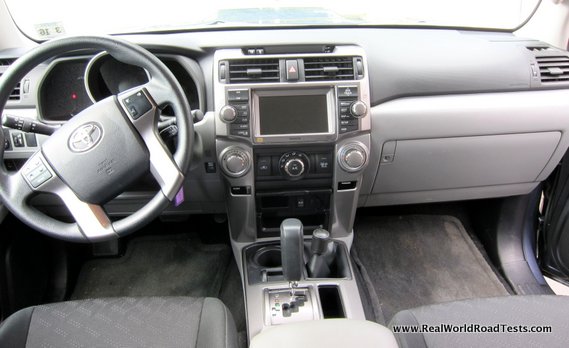 Inside the vehicle you’ll find high quality materials which one comes to expect with a Toyota. Immediately you’ll notice the continued rugged theme of the 4Runner flowing into the cabin. Sitting inside, you and three other adults will find ample leg and head room both in the comfortable front and rear seats. It’s possible for a third adult to sit in the rear, but 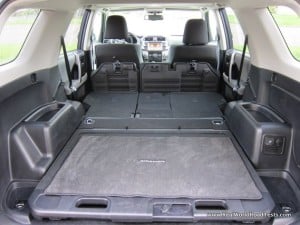 you’ll probably get to know each other all too well on longer trips. When just two occupants are in the rear, they’ll enjoy plenty of space and the ability to recline up to 16 degrees in four steps in each seat. When wanting additional cargo room, the second-row seats can fold flat providing a level load floor.

Our 4Runner was outfitted with a pullout tray versus third row seats, which is what we’d prefer especially after imagining how cramped the seating would be back there otherwise. I must admit my first reaction was that the tray was unnecessary and just takes up space. Take the sliding tray out and give us the extra room… Or so I thought until it came time to load it the truck up with heavy tool boxes, tires, and other gear. As I loaded more and more equipment, I began to appreciate not having to shove items into it and the ensuing backache. Even when loading items as simple as bags of groceries, my family appreciated this feature. 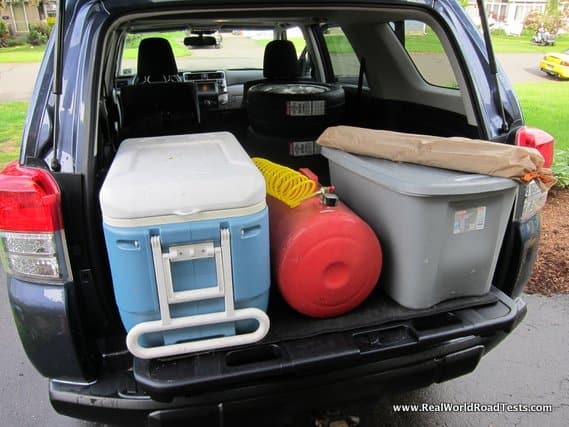 My initial driving impression was that the handling felt a bit “floaty,” not feeling truly connected to the road…basically like many trucks. Well duh! The 4Runner is essentially a truck, owners think of it that way, and this isn’t a bad thing. Toyota continues to build this vehicle to reach a market of consumers who enjoy the fact that the 4Runner isn’t a ride trying to appeal to people looking for a car in an SUV body. And you know what? It actually all fits the overall character of the vehicle and doesn’t deviate from what has created a loyal 4Runner community. If you are looking for a more comfortable SUV, the Toyota Highlander would be a better option. 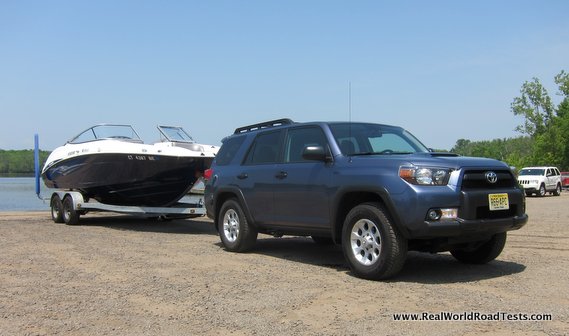 We tested its towing ability with a racecar accompanied with plenty of gear (approximate weight of 4,500 pounds total) as well as a boat/trailer that weighs approximately 4,200 pounds (separately, of course). Given that the truck has a tow rating of 5,000 pounds and a 4 liter V6 engine, I thought it was going to struggle a bit, especially going up hills. While its certainly not a beast of a tow vehicle, it held it’s own. Whether merging into traffic from the highway entrance ramp or going up some of the New Hampshire hills, I never felt like the truck was having a very difficult time towing the load. Alright, fine, it wasn’t totally at ease but it wasn’t winded either. Although it has an automatic transmission, towing is made easier on hilly roads with its ability to manually select the gear you want and keep the engine in its peak power band. The brakes also felt capable and I wasn’t concerned with it’s ability to stop. For a person who’s not looking to tow on a daily basis, the 4Runner does just fine.

Off road
Off-roading is another area that the 4Runner is known to shine. Although we weren’t able to take it out on any serious trails, we did give it a little bit of testing on some dirt roads and a few basic unpaved hills. With the ability to put it into 4WD high or 4WD low, 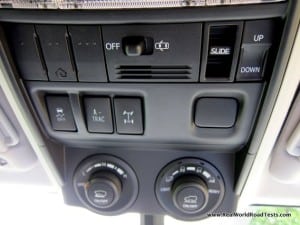 and lock the differential, it’s more than capable of traversing mud-filled roads or up steep inclines. The truck also comes equipped with a CRAWL control that is essentially a low-speed cruise control for off-roading which handles both accelerating and braking. The purpose is to allow the driver to dial in speeds from 1 to 3 mph allowing the driver to concentrate on steering across the difficult terrain. While I can’t see ever really using it as I enjoy the challenge of having full control over the truck, I suppose it does serve to show the vehicle’s capabilities and provides an emergency “get get me out of here please” tool when just putting it into 4WD low won’t suffice.

Go Anywhere, Do Anything Anytime
To me as well as to many of its owners, this is the true personality of the 4Runner. Being with the vehicle made me want to go on various adventures whether it be a camping, a fishing trip, some off-roading, or strapping a kayak to the roof rails and hitting some rapids. What’s weird is I don’t even like to fish and would probably drown if I attempted taking a kayak out on white water, but the truck put me in touch with my adventurous side. Even when one wants to tone things down a bit and go tailgating, the truck is more than ready to accommodate. It has a unique “party mode” audio setting that raises base response and shifts sound balance to the rear of the vehicle where there are rear liftgate mounted speakers. While that’s more of a marketing gimmick, I actually fell for it and liked it. Need to power up your laptop or maybe a blender to make a fruity beverage? Have no fear, there are front and rear 12 volt and 120 volt AC outlets readily accessible. If you’re not out having fun and need to make a Home Depot run, you’ll be able to transport those few longer pieces of wood by merely lowering the rear powered liftgate window. I really liked this feature even just because of how it changes the air circulation when the driver’s side window (and others) are down.

During the week we had the 4Runner, several people approached us saying that either they have one or a family member does. People were passionate about the vehicle. They talked about how the 4Runner is unique, and needs to be looked at a bit differently and appreciated for what it truly is. The more time I spent with it, the more I understood why it continues to have a loyal group of 4Runner “fans.” You don’t become just a 4Runner owner, but a part of a unique club, similar to Jeep Wrangler owners. While it’s not the perfect match for everyone, but there are plenty of people who this truck will appeal to.

Models
While we were testing a 2011 model, the overall styling has not seen drastic changes since then, which to its fans is a good thing. The 4Runner is offered in three models, the SR5 which has a MSRP of $31,090, Trail (MSRP $36,765) and Limited (MSRP $38,595). Each come with specialized equipment packages and various options. All are powered with the same 4.0L V6 engine mated to a 5-speed automatic transmission.