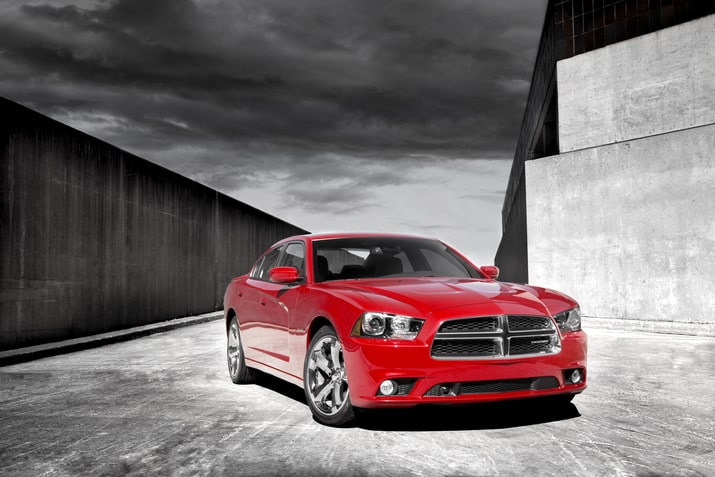 If you’re in the market for an American muscle car, but need four doors, a roomy back seat, and an automatic transmission, than you’re in luck. The 2012 Dodge Charger R/T is a car that meets those needs.

The Charger originally hit the automotive scene in the mid 1960’s as a 2-door fastback, and has a legendary racing history. My favorite charger of all time is one of the most famous TV show cars in the world, The General Lee from The Dukes of Hazzard. That was a modified 1969 Charger. In 2006, the Charger was reborn as a 4-door sedan. Its 2-door sibling lives on as the Challenger. The Charger’s latest major redesign was for the 2011 model year and came with many quality improvements. The Charger is available in an abundance of trim lines and options with choices for almost everyone and base prices ranging from $25,595 to $46,795. Most importantly, for 2012 you have the choice of 3 power plants ranging from the new 3.6L Pentastar V6 with 292 Horsepower in the SE all the way to the 392 cubic inch displacement HEMI V8 with 470 Horsepower & 470 lb-ft of Torque in the SRT8. Our test car is the R/T AWD and has the 370 HP HEMI with 395 lb-ft of torque.

The Charger is Dodge’s flagship car. They claim it has an iconic soul, and it proudly delivers “world-class performance, craftsmanship and refinement… at an incredible value.”  Does the Charger live up to these bold claims, or does it fail to deliver on them?

Our first impression of the 2012 Charger is that it’s large and masculine with modern-classic styling. It’s inspired by the second generation Charger from the late 1960s.  In the front there is a large split crosshair grille and headlights that make the car look angry as if it is telling a car in front of it to get out of its way. The hood and doors are marked with large scallops. In the rear, it has a unique tail-lamp design that incorporates 164 LEDs in the shape similar to that of a racetrack. 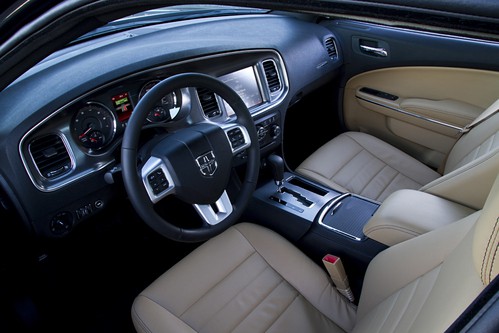 Once we were seated in the vehicle, we were pleased with the overall look, quality, and comfort of the cabin. Its interior looks somewhat sporty, and more upscale than the 2010 model does, however, it feels more like a large car than a muscle car. Also, in this trim level it feels a little drab. If you opt for a higher trim level, you’ll be rewarded with a more upscale and inspiring look. The thick-rimmed three-spoke leather wrapped steering wheel allowed for a comfortable grip. The cloth front seats were comfortable and supportive. The gauges and controls are intuitive and easy to read, and visibility all around the vehicle was reasonable good.

Once we put this beast in motion, we were delighted with the way it drives. Acceleration is very quick and smooth. 0-60 MPH takes only 5.5 seconds. The engine provides a constant thrust all the way to the 5,600 RPM redline. The 5-speed auto-stick transmission shifts quickly and smoothly, and is nicely mated to the HEMI. However, I would like Dodge offer a manual transmission in this car too. The ride is smooth and very comfortable, much more so than I was expecting. Handling is also impressive for such a heavy car and is more than competent on public roads. This car has such a solid and planted feel to it that it rivaled the feel of a Mercedes Benz E class that costs thousands more. The Brakes feel strong and have a nice pedal feel.

The noise inside the cabin while driving is definitely tuned on the quieter side. The HEMI’s growl is much quieter than you would expect for a muscle car, but it does sound sweet and smooth all through its rev range. Road and wind noise are quelled by a dual-pane acoustic windshield, silencing foam, and acoustic wheel-well liners.

Rear seat room and comfort is great for two people. The only problem I have with the back is the middle, which is not contoured for comfort and has very little headroom for taller folks. Also there is a driveshaft hump that robs most of the legroom. For a car this large, I was expecting enough room and comfort for three.

Trunk room is about what you’d expect for a large car. It has 16.5 cubic feet of trunk space which is generous. The trunk hinges are hidden safely so they won’t squish your luggage when the trunk is packed. If you need more cargo room, the Charger R/T also comes standard with split-folding 60/40 rear seat backs that fold almost flat.

So after spending some time with our Charger R/T, we were definitely impressed with it. This Dodge does have an iconic soul, but a much more mature and refined one. It has more power, smoothness, and livability than we ever expected. But to call its performance, craftsmanship and refinement world class sounds like an overstatement to me. The car just weighs too much to have world class performance.   We noticed an uneven gap between the panels on the outside of the car making us question Dodge’s claims of refinement and craftsmanship. This is a fantastic car that does almost everything right, and at $32,990 it is a great value, but I wouldn’t call it world class.