To this day, I vividly remember my father taking me for rides in his 1966 Ford Mustang GT. On numerous occasions,  we would get in the car and just drive with the top down, the engine growling, with no real destination in mind. The car had character and in some way was a part of the family. Since then I’ve kept my eyes on the Mustang’s development and have test driven several of the newer generations. I’d see pictures online and read reviews, but none really gave me that nostalgic feeling of the iconic American muscle car.

When looking at the 2012 Mustang, one can see how Ford incorporated various styling features from the later ‘60s generation Mustangs into this generation. When sitting inside the GT convertible we were testing, I was pleasantly surprised. There are some 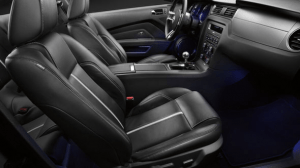 plastic pieces, but it still had a nice look and didn’t detract from the overall feel. The front bucket seats were comfortable, the various dials and knobs were within easy reach, and the operation of everything just seemed to make sense. The steering wheel doesn’t telescope, but that wasn’t an issue for us. While there are rear seats, only small children who do not need a booster or car seat will fit. The trunk space was smaller than I expected but a large part of that is due to it being a convertible and having the Shaker 1000 audio system which includes a subwoofer inside of the trunk. The audio system sounded pretty good, but  we much preferred the tunes of the engine and exhaust.

We were impressed by the overall interior design, but what we really wanted to do was try out the 5.0 Liter, 412 horsepower engine. The car did not disappoint. 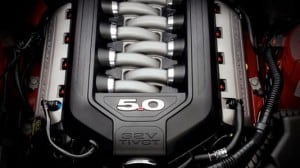 Wow! The power is simply intoxicating. The six speed manual transmission shifted smoothly, the clutch was surprisingly light, and it was easy to drive in stop and go traffic. The engine and exhaust notes were raspy and growling, but not over powering inside the car. When you stepped into the throttle hard the car let out a great sound but when just cruising about, it was quiet enough for us to talk about how much fun we were having. Test results yielded a 0 – 60 mph time of 4.8 seconds which we felt compelled to test repeatedly again and again just to be sure. It was difficult not to just floor the gas at every opportunity. Turning traction control off at a push of a button, we were easily able to break the car loose and enjoy the aroma of freshly burnt rubber.

In many respects, this is how I define the soul of the Mustang GT. It’s one of those cars where approaching a traffic light, you just hope that it turns red and there’s no one in front of you. I found myself even slowing down for green lights almost hoping it would turn red just as an excuse to stop and let the car run. We talk about what the car is designed to do, and Ford nailed it with this model so appropriately named after a Mustang horse breed which loves to roam free and let it all out.

Beyond the power of the car, the ride was comfortable and not harsh like I was expecting. The suspension had a nice blend of being firm but not overly stiff. After relishing in the power the Mustang showed off, I anticipated it to be a car only capable of going quick in a straight line. But when driving around curvy roads the electric power steering felt smooth, and the car amply connected with the road unless I decided to break it loose.

While Ford incorporated selectable steering that has three settings ranging from a sport mode which requires more steering effort to a comfort mode which is meant for longer road trips, we just kept it in the middle setting. I had no complaints with being able to feel what the car was going to do and honestly, was just having too much fun driving the car to critique the differences between modes. 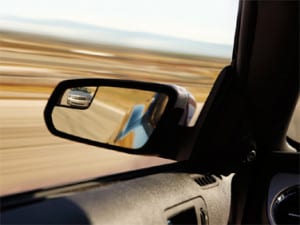 On the side mirrors Ford incorporated “spotter mirrors” which essentially include a small section that is curved to help eliminate blind spots. I’ve heard a few complaints from people about how it takes away from the look of the car. I’m sure  hitting someone who unknowingly was in the lane right next to you would make the Mustang look so much better.

The 2012 Mustang comes in 11 different models. The base V6 version makes enough power to satisfy the majority of typical drivers at 305 HP and comes with a lower starting sticker price of $29,310. The coupe V6 starts at $22,310. Maybe you can’t help but immediately jump to the more powerful 5.0 liter GT model, but keep in mind that the V6 also gets and impressive 31 mpg on the highway. That’s really pretty good when considering the how much power is being put out under the hood.

But if you’re like me, the more powerful 5.0 GT is the way to go! Either way, you’ll find plenty of excuses to just get in the car and cruise with no real destination in mind.