A Practical and Economical, Yet Pretty Fun Hatchback 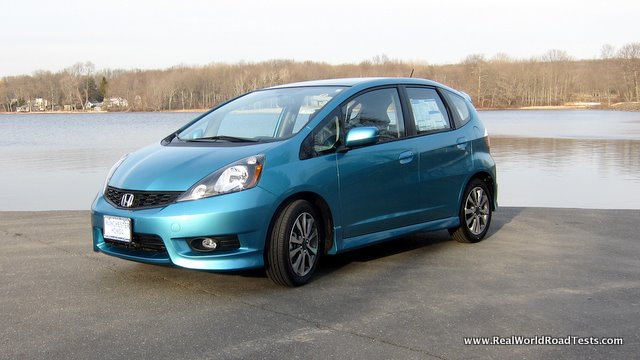 A typical criticism of small cars is that they’re…small. However, do not let the Fit’s exterior size fool you. The interior of the car is where it really stands out, not just in terms of space but also simplicity.

Sitting inside the car, we found it to be comfortable and all controls were within easy reach. Frontal visibility was very good, and we did not experience issues with either rear or side visability. When in the front seats, there was ample leg and head room. In the rear, an adult can fit fairly comfortably but there’s not a lot of leg room. I would be fine riding in the back for relatively short trips but for a long ride, I’d be uncomfortable. One minor criticism with the interior of our test car was that while there was a driver’s side arm rest, there was not one for the passenger side. This can be easily be remedied with a $242 optional center arm rest that also includes a storage compartment. 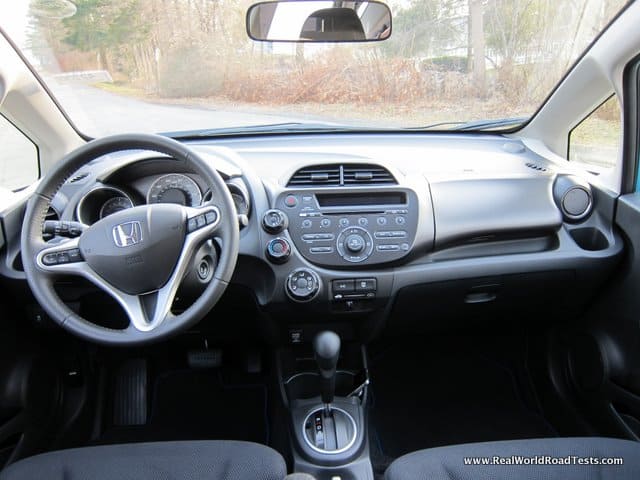 In an era where technology is a focal point, our opinion is that many cars have gone a bit overboard trying to incorporate fancy gadgets which makes attempting to control them too challenging. Or I suppose it’s possible that even a thirty something year old is starting to show signs of “get off my lawn!” syndrome? Regardless, the Honda Fit 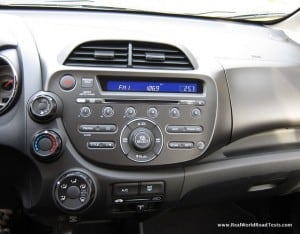 has controls that are extremely intuitive to the point where I found myself reading through the owner’s manual wondering what I was missing. Now granted, many cars on the market have simple controls but it seems that there are functions which take some time figuring out and adapting to. Not in this case – everything was straight forward.  Tasks that should be simple such as turning on the radio then changing the frequency, turning on the heating or cooling system, or even turning off Vehicle Stability Assist were just that – simple. After going through the manual a bit more, I learned that I actually wasn’t missing anything that I didn’t figure out after playing around with the various buttons and opening up compartments for five minutes. Now I realize some might say that it’s simple because there really are not a lot of fancy gadgets, but we found that the car has everything we’d ask for this type of car.

One of the Fit’s overall design highlights is the sheer amount of cargo room it offers. With the rear seats up, it offers 20.6 cubic feet. The cargo volume jumps up to 57.3 cubic feet when the rear seats are laid down which is as much room as some small crossover SUVs. Okay, so cubic feet specs are nice for comparing to other vehicles, but what does it really mean to us in the real world? 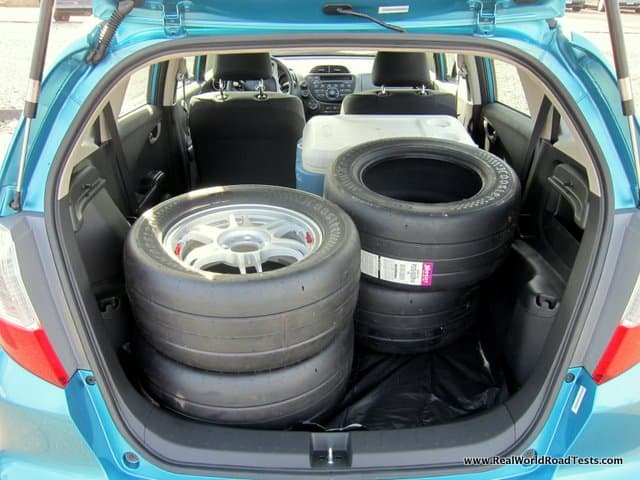 It means is that there is plenty of room for trips to the home improvement store, or in our case for race tires, a large cooler and still have extra room to spare. Honda was able to accomplish this feat by moving the fuel tank to under the front seats (versus beneath the rear seats as traditionally done), combined with utilizing a compact H-shaped torsion beam rear suspension. I truly can’t say enough positive things about the rear “Magic” seats. While I was impressed with the multiple ways the seats can be configured, I was equally impressed with how easy it was to accomplish and took little physical “oomph”.

At first we were a bit disappointed that we were unable to test a Fit equipped with a 5 speed manual transmission, but the automatic with steering wheel shift paddles was enjoyable. Upon selecting a gear, the shift occurs without hesitation. If you’re in a lower gear and are approaching redline, it won’t shift until you tell it to. As a safety precaution, it won’t allow you to down shift into a gear which would force the engine to exceed the RPM red line and potentially damage the engine. Upon coming to a stop, the Fit automatically puts the transmission into first gear ready for takeoff.

While Honda has made additional attempts to reduce interior noise, you still hear outside wind hitting the car and the engine whine especially under acceleration. In the Fit’s case, the engine noise is not one of a pleasant flexing of its muscles but more of an “I’m working really hard here, leave me alone!” sound. Still, it’s far from being horrible and once again we need to consider the price point of this car. 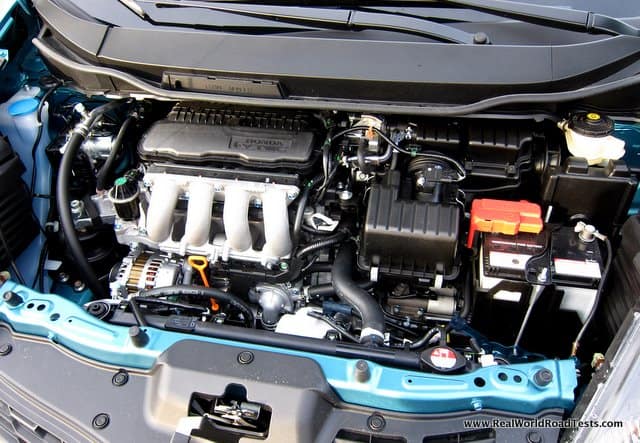 While 117 horsepower and 106 lb-ft of torque doesn’t sound all that impressive, it doesn’t mean this car isn’t at all fun to drive. I can also say this from a perspective of someone who races a 110 HP car and trust me, that amount of horsepower can still manage to invoke a big grin when the car has other attributes that help overcome the lack of power. If you’re looking for a car that has gobs of power and pushes you back into your seat during acceleration, this certainly is not the car you’re looking for. The engine needs to work hard when going up hills or being pushed, but we found it to still be capable. When merging onto the highway, the car’s low power didn’t present an issue.

As with many lower horsepower “momentum” cars, a key ingredient is how the car handles. This car can be tossed into corners and surprise you with just how well it grips the road making the car fun to drive. 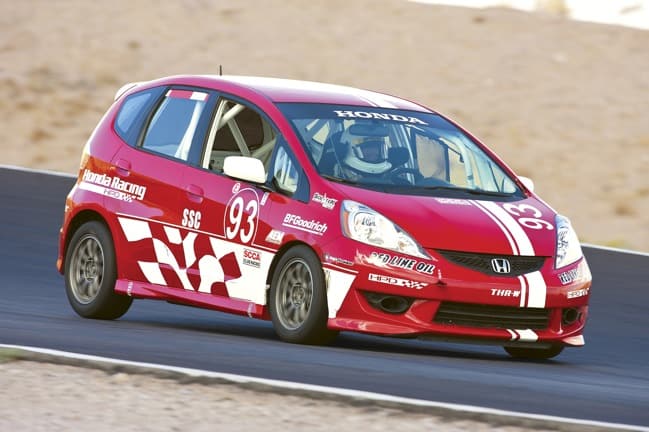 As a testament to the Fit blending a low cost yet capable car that’s can be fun, it’s even possible for you to race the Honda Fit in the new Spec B racing category. While most people will never go this route, it somehow gives the car a bit of a performance persona which is often not the case with a subcompact low-horsepower car. If you are to move forward with a Fit for Spec B racing, we would recommend purchasing the base model due to its lower price tag. The Fit Sport does include a rear roof-line spoiler, underbody aero kit, but according to Honda Performance Development those items do not enhance performance. One item that is recommended to add to the base model is the rear stabilizer bar which can be bolted on fairly easily and bought for approximately $250.  Even if you don’t go to this extreme, there’s certainly nothing saying that the Fit can’t be a fun track car!

Safety Features
For whatever reason many people fall into a trap of thinking that in terms of vehicle safety, bigger is always better. They then look at a small sized car such as the Fit and automatically think that there’s no way this car can be safe. Even with such a budget friendly car, Honda took great strides to equip the Fit with many safety features.

To start with, the Fit comes standard with front and side curtain airbags. In the front seats, it has what is called “active front head restraints.” In a sufficient rear-end impact, the active head restraints (the head rests) for the driver and front passenger move forward and up in a fraction of a second, helping reduce the likelihood of neck injury.

In an effort to hopefully avoid the impact in the first place, the Fit comes equipped with Vehicle Stability Assist and Anti-lock Brake System (ABS). The ABS system is further enhanced by Electronic Brake Distribution (EBD) which adjusts braking pressure front-to-rear, based on the weight distribution of passengers and/or cargo. Weight distribution is determined via the relative difference in rotational speed of the front and rear wheels. Greater braking pressure and as a result, stopping power is directed to the rear wheels when cargo loads in the rear are heavier. The Fit is also equipped with a Brake Assist System that helps recognize emergency braking situations and momentarily assists in applying brake force in a “panic stop” until the driver releases the brakes. Unlike some other cars which employ a similar system, we did not experience the Fit’s Brake Assist System to overly engage braking or implement it when unwanted.

What happens when the Fit has a frontal collusion with a larger vehicle? Honda’s Advanced Compatibility Engineering (ACE) comes into play. Statistics show that many of the fatalities in collisions involve a significant mismatch in the height or weight of the two vehicles. Honda engineers designed a new body style that utilizes a network of connected structural elements to distribute crash energy more evenly throughout the front of the vehicle. This enhanced frontal crash energy management helps to reduce the forces transferred to the passenger compartment and can help to more evenly disperse the forces transferred to other vehicles in a crash. It is also designed so that it increases its compatibility with other vehicles during a frontal impact. (The Insurance Institute for Highway Safety named the Fit a “2012 Top Safety Pick.)

Honda’s goal for the Fit is to combine utility and fun into a small, inexpensive package. They certainly achieved those goals and more.
[nggallery id=13]