A Pure Performance Coupe at an Affordable Price

When Nissan set out to design the 370Z, they wanted to produce something sexy that would highlight the vehicle’s technical and mechanical details. They also wanted to honor the history of the 240Z and 280Z while giving the new model a fresh, more aggressive, modern design. What better to provide inspiration to designer Randy Rodriguez than  Discovery Channel’s airing of Shark Week playing in the background on his t.v. while he was working on this project? Randy stated that the car’s body sides were designed to look somewhat like the belly of the shark and the belt line of the 370Z was made to resemble that of the fish. Merging these and several other elements into the design resulted in an aggressive and sleek looking car ready to devour the fiercest of roads.

The 370Z interior styling is much improved over its predecessor, the 350Z, while retaining

signature Z elements such as the three secondary gauges located towards the top center of the dash and the hooded instrument panel. The upholstery and other materials used make the interior look classy and produce a significantly nicer feel than the 350Z. Sitting inside the car, there is ample legroom, headroom, and shoulder room for both the driver and passenger. Neither myself nor my passenger felt cramped or like we were attempting to merely fit inside the car. While the trunk compartment was improved compared to the 350Z by moving the rear chassis stiffening brace further forward, the available space is quite shallow limiting what will fit inside. On trips to stores you’ll need to shop frugally and be prepared to lay items on their side to fit. If I had to pick the biggest downfall of the car, the lack of trunk space would be it.  But then again, you  probably wouldn’t choose this car for its practicality.

Inside the cockpit, visibility can be a bit challenging with blind spots on both sides of the car as well as looking behind through the rear view mirror. Being accustomed to a two-seated sports car, the side visibility wasn’t any worse than what I’ve experienced in other similar cars. For the most part, that’s just how two seat sports cars are unless it’s a convertible with the top down. It really just takes some time to get used to. If you take extra precaution when changing lanes, and get accustomed to relying more heavily on the side mirrors, you’ll be fine. Due to the contour of the rear window, the view behind is reduced but it’s manageable. At first this limited rear visibility caused some concerns when  I thought about having to put it into reverse, but fortunately Nissan incorporated a backup camera which displays on the rear view mirror. The functionality and warning indicators on this system work well.

Power delivery to the rear wheels comes in a 6-speed manual which we were testing or a 7-speed automatic transmission with paddle shifters. Unlike some cars that tend to have spikes in the power band, the 370Z was smooth throughout the RPM range. You can certainly feel that the car has 332 HP and is most definitely quick and hugs the road nicely when thrown into corners, but to me it felt too refined and subtle. For many people who would be using this car as a daily driver, this smooth ride may be appreciated. Being a guy who likes feeling the road more, enjoys having the ability to induce a bit of over-steer and wants to hear the engine roar, I can’t help but wonder if some of this refinement is too much for what is billed as an aggressive sports car. The good news is that this can be easily overcome either through choosing the 370Z’s NISMO model or some aftermarket modifications.

The NISMO model was tuned to be more aggressive in performance, handling, looks, and sound. On short drives, I’d argue with anyone how these modifications could possibly be bad. However, if you need to go on longer road trips or satisfy the less aggressive nature of a significant other, maybe this model isn’t for you. The NISMO integrates a stiffer suspension, gains 18 HP through exhaust and ECU modifications, tuner aero body styling effects, and customized interior styling, among a few other tweaks. After looking at what the NISMO model adds then figuring out how much come of these modifications would cost to do on my own, I viewed the NISMO as a good upgrade value. 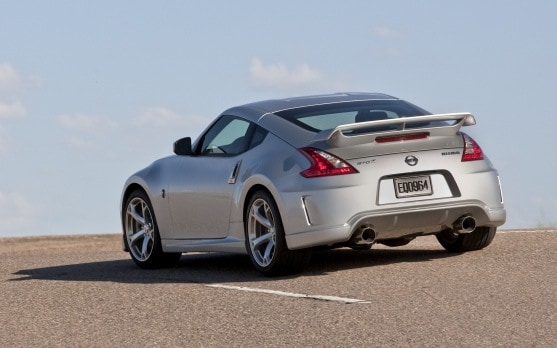 A new technology called SynchroRev Match is included with the sports package and the NISMO model. This system automatically performs the heel-and-toe process of matching throttle blips when you downshift the car. The benefit of this overall function is that it makes for a smoother transition and doesn’t disrupt the balance of the car when downshifting if the driver doesn’t heel-toe shift. The video below shows the general process of heel-toe shifting when the driver is blipping the throttle under braking. While I have mixed emotions about this technology taking away from the necessary skill set of heel-and-toeing, I suppose it could be compared to cars having ABS or an automatic transmission although there’s a reason why I prefer manual transmissions. Note: the 370Z does not come with pedals that easily accommodate heel-toe shifting from the factory because the brake and accelerator are too far apart from each other. This can easily be remedied by purchasing over-sized pedal faces which mount on top of the existing OEM pedal faces. The SyncroRev Match system works surprisingly well and if you’re not fond of it, you can easily the turn it off with the push of a button.

In the end with the 370Z, you get a fun rear wheel drive sports car at a price point that represents a good bang for the buck.