I just can’t stand the way station wagons look! Yet as a family that begrudgingly has one that was intended to be a winter beater, I can’t say it doesn’t offer nice utility. We also have an SUV which yields ample room for the family and whatever gear we desire to tote around. The SUV’s fuel mileage is horrible, the ride is boring, and if I didn’t require a vehicle that can tow my racecar we wouldn’t own one. 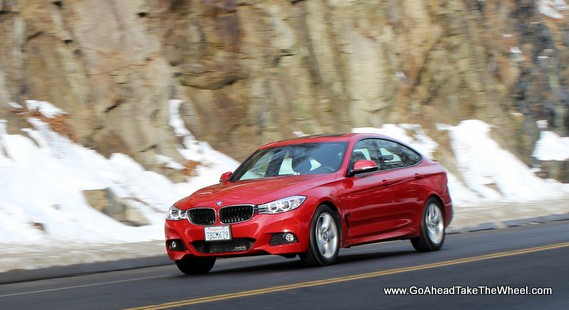 Don’t get me wrong, I don’t fall into the camp who believes that we need the biggest vehicle possible and nothing short of a Chevy Suburban will work for our family of four. Hell, we made a two-person sports car work while having a boy in our family until he was five years old. Then when our daughter was born, it was time to transition to a “family car” which recently became a BMW 135i convertible. Yet I’m unique and have a very accepting wife who for some reason puts up with my…Um… You can come up with your own series of words. With a rear facing baby seat in the 135i and my wife sitting in front of it whose 5’ 6”, there’s only about an inch between her knees and the dash.

My son sits behind me and kicks the seat urging me to move up even more. I am moved up!! The 135i trunk is small, a compact stroller fits but then there’s little room for anything else. We live with these inadequacies and all do agree the car is still worth it. Although I am reminded by my wife that there are some days she hates me.

Most families or people who actually want to put full-sized people in the rear seats are not as accommodating as we are. Yet the 3 Series sedans don’t really have a lot of room in the rear seats either. I’ve been a passenger in the back of my father’s 328i and, while it technically works, I felt a lot like my son does in back of our 135i. For longer road trips you’ll most likely either take another larger vehicle that you own or wish you had one. This is where the BMW 335i xDrive Gran Turismo (GT) comes up to bat and fills a void. The 335i GT maintains all that we’ve grown to love and endear about BMWs, yet has plenty of room for occupants and cargo. 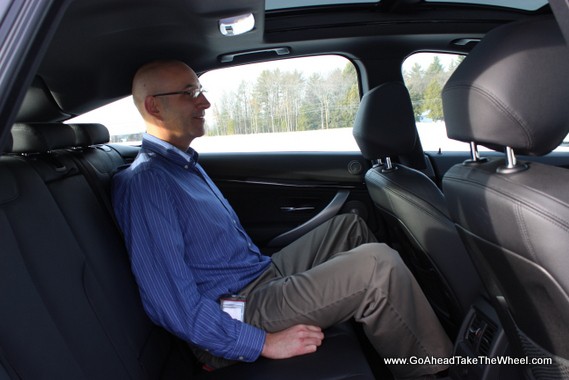 (My friend Tony who’s 6′ 3″ tall fit comfortably in the back seat of the GT.)

Prior to driving the car, I was a bit concerned having heard some reviews that the car’s performance is a bit lack luster. This made sense to me as the GT uses the same 6-Cylinder TwinPower Turbo (N55) motor available in the 335i, yet weighs in at 4,010 pounds which is 300 pounds and 230 lbs more respectively. It is also fitted with the rear suspension of the sport wagon to make it softer and more comfortable, which I anticipated that would further impair its abilities. Would the Gran Turismo just be a comfortable but bloated family commuter car? 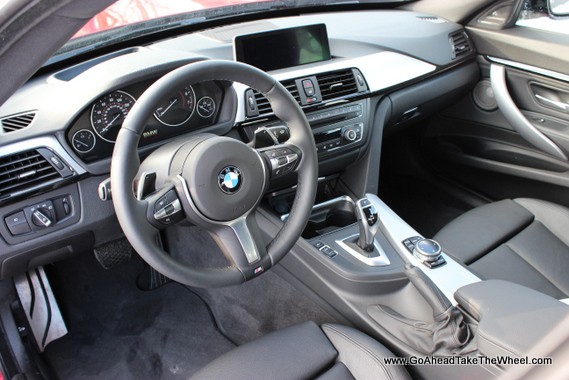 Upon entering the cabin, you’re greeted with the BMW luxury, comfort, and looks you’d expect. The seats felt sporty and capable of holding you in place, but the average American won’t feel as though they’re being squished in even if you’ve had a few extra burgers and beer. On my first drive with the car, I took it out on some nice, twisty back roads where I could see just how the car handles. I must say, I was pleasantly surprised with how capable of a car the 335i GT is. The handling is crisp, controlled, and fun. I never felt like the car had dreaded body roll, felt floaty, or had too much understeer. Initially I did feel that the steering was on the numb side but only really noticed it when focusing on that aspect of the car. Otherwise when driving, it blended in and it wasn’t a concern. 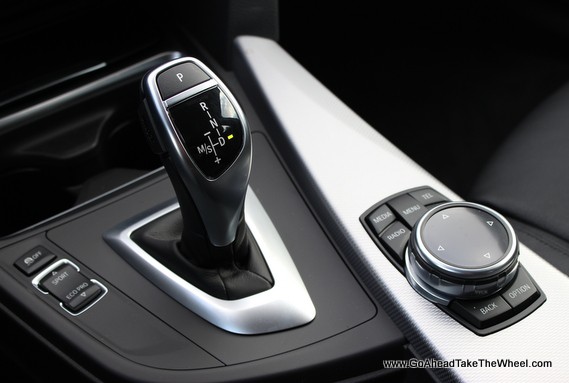 Although the car is not available in a manual transmission, the 8-speed automatic worked quite nicely and was responsive to my throttle inputs. Our test car was also equipped with paddle shifters, but I didn’t find myself using it much as I just didn’t feel the need, unlike some other cars with paddle shifters. During hard acceleration, the car’s 300 horsepower and 300 foot-pounds torque gives it a quick feel as you’re propelled from 0 – 60 in 5.1 seconds. Overall, the GT feels similar to the standard 3 Series other than sitting a bit higher up and not minding bumpy roads as much. While I didn’t feel a longing to take it out on a track, it was far from boring. 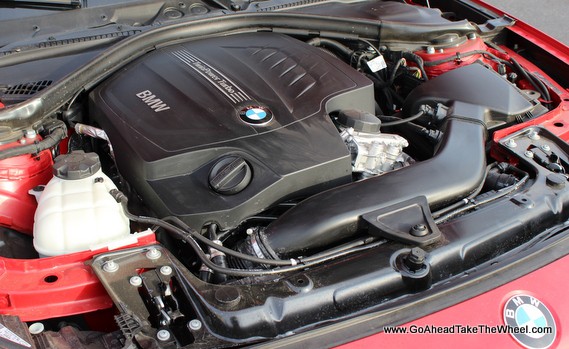 If you do find yourself craving some extra power or other modifications, there are multiple tuning options out there. For my personal BMW, after much research I purchased a JB4 ECU tuning system from Burger Motorsports. For the N55 engine, you can expect a gain of about 60 HP at the wheels (80 HP at the crank) for just a $530 price tag. That does not include installation, but it’s quite simple to do yourself. 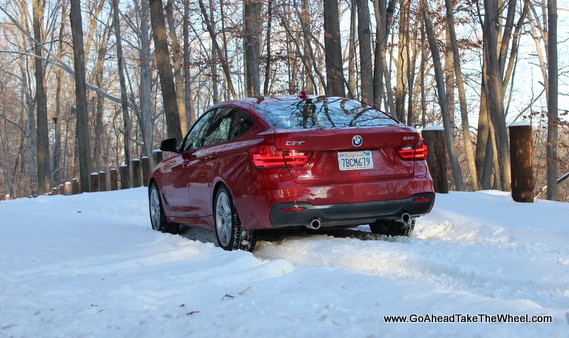 Since there was snow on some of the back roads, I couldn’t help myself from testing out the BMW’s xDrive system. If you’re not familiar with xDrive, it’s BMW’s intelligent all-wheel drive system with rear-wheel bias for surefooted grip on slick or uneven roads, without sacrificing the feel of rear-wheel drive. As you might expect, the system sends power to the wheel or wheels with the most traction. That means under normal conditions, drive forces are spread out with a rear-wheel bias. When the system senses excessive wheel slip, it shifts torque to meet the changing conditions, offering maximum available traction. At first I wondered just how smart of an idea my snow test was and if I’d be looking for help getting out, but quickly gained confidence in its ability to maintain traction. Both on dry and snow covered roads, the xDrive system worked nicely. 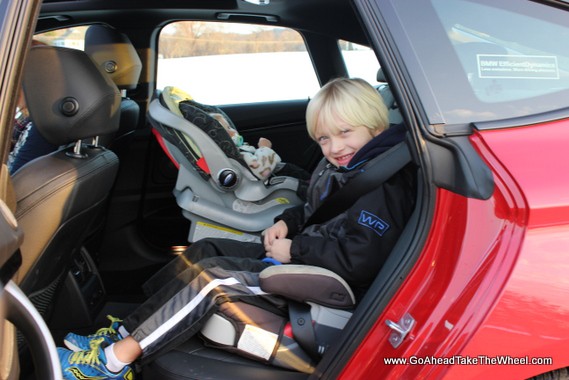 Where the 3 Series GT really shines is when it comes to the sheer amount of space inside the car for both passengers and storage. I decided the best way to test the Grand Touring nature of the car was to pack up the family and go out for a multi-hour excursion. We have little ones in our family including an infant, which often means bringing lots of “stuff”. As I loaded the trunk with a stroller and other baby gear, I truly appreciated all of the trunk room. Under the cargo floor, it features a couple separated components and room to store the cargo shelf. There’s also a pneumatic strut to support the raised floor. In instances where you are trying to fit in longer objects, you’ll also enjoy the 40:20:40 rear folding split seats. As with most BMWs, there is no spare tire and it’s necessary to rely on run-flat tires. 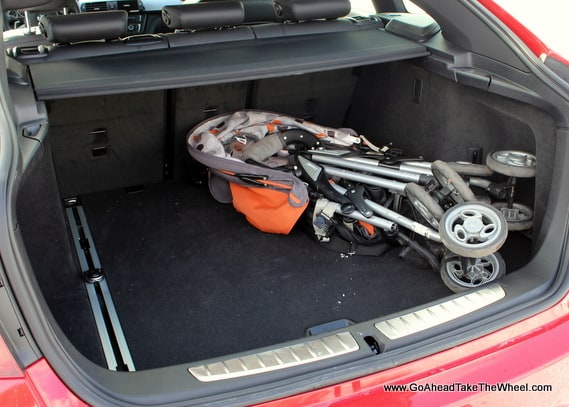 With my 5 year old son sitting behind me and our daughter in a rear facing baby seat behind my wife, none of us felt compromised in terms of room. We had no real destination in mind (which my son just couldn’t comprehend), but we found ourselves being comfortable and taking in the surroundings. In my previous trip I was exposed to the performance nature of the car, but this trip revealed the subtle and relaxed personality it also has. As we drove, we felt at ease and calm. When at a red light I wasn’t finding myself thinking I was at the drag strip waiting for the green and my ¼ mile time sheet as often is the case. As we journeyed through the country side we continued to grow a stronger appreciation for the car’s comforts. Oh, and the Harman / Kardon stereo – fantastic! I often found myself listening to music we traditionally don’t just because of how wonderful instruments sounded. The journey came to an end as unfortunately did our time with the car.

Throughout my experiences with the BMW 335i GT, I kept thinking how much I’d prefer owning this to an SUV. It offers much of the utility of an SUV but comes with the advantages of being a car. Good fuel economy, parking is easy, and is fun to drive. It offers a great balance of performance and practicality. If you’re in the market for a vehicle that fits these needs, it deserves a closer look.

The Gran Turismo comes in two different flavors within the U.S. The other version which we did not test is the 328i GT which has the same 2.0 turbo engine found in the 328i sedan. That is engine is rated at 240 hp and 258 ft-lbs of torque. It comes with a MSRP price tag starting at $41,450 versus the 335i which comes in at $46,850 not including destination charges.

The 335i GT is only available with an 8-speed automatic and there is no diesel engine option.

Options Our Tester Came With & Opinions

You’ll need to spend some time studying the various lines, packages and options when building your car as there are often multiple ways you can get some of the items you’re looking for. And of course my opinions are just that. Below are the high level items each come with:

Although our test car started at a base MSRP $46,850 then with all of the above options reached $59,325 (neither including the $950 destination charge), it’s quite realistic to get a nicely appointed version for around $50,000 after negotiation.