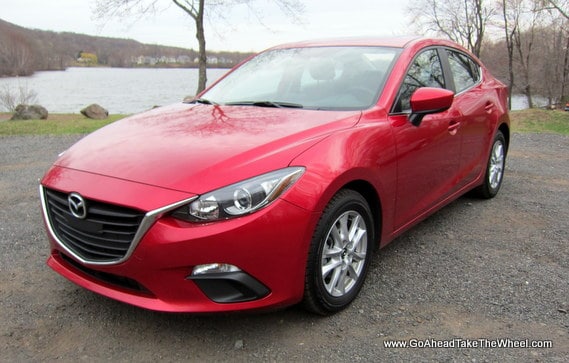 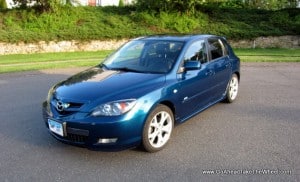 first generation Mazda3 was first introduced to us over ten years ago (pictured on the right). It helped change the way people viewed the compact car segment which consisted of many vehicles that were uninspiring, lacked performance, felt cheap, or had questionable reliability. The Mazda3, however, felt like a more expensive sporty car at an affordable price, with its commendable performance, agile handling, attractive styling and class leading interior. For me, it felt like the way a BMW 3-Series would have felt back then if they produced a sub $20,000 car.

The second generation Mazda3 (2010-2013) had some performance and efficiency enhancements over the first generation. Notably, SKYACTIV TECHNOLOGY was added for the 2012 model year. But I could not get past its styling, primarily the big grin integrated on the front fascia.

The third generation Mazda3 is all-new for 2014. With it comes much improved styling, a choice of two gasoline engines, a SKYACTIV-G 2.0-liter (“i” models) and SKYACTIV-G 2.5-liter (“s” models), an updated infotainment system, and new safety systems under the umbrella known as i-ACTIVESENSE. It’s available in four-door and five-door body styles, and in four trim levels – SV (sedan only), Sport, Touring and Grand Touring. Pricing starts at approximately $17,000 MSRP for sedans and approximately $19,000 MSRP for the five-door. Our test vehicle is the i 4-Door Grand Touring with the SKYACTIV-G 2.0-liter and manual transmission.

As a current owner of a 2007 Mazda3 S Grand Touring 5-Door, I was very curious to get behind the wheel of the new 2014 Mazda3 to see how it compares to the first generation in terms of style, comfort, performance, and safety. It is interesting to see what progress has been made to over the past eleven years, and where things were compromised. 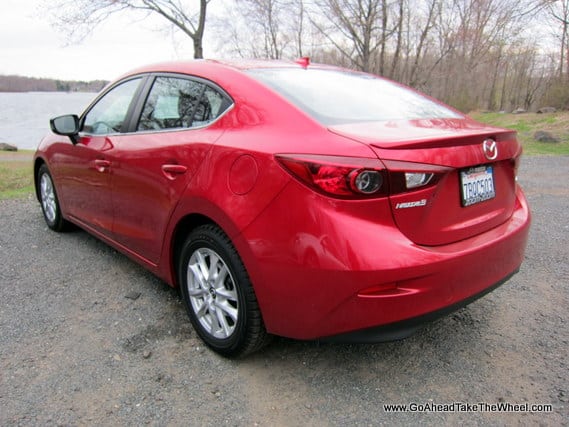 Like the first generation Mazda3 when it was first introduced, the exterior of the third-gen is modern, sleek, and appears more expensive than it is. There is a now a strong family resemblance to its big brother the Mazda6. This is because the new Mazda3 now receives the same KODO “Soul of Motion” makeover as the Mazda6.

Included in the new styling in front is a five-point grille with Mazda’s signature wings that flows towards the slanted headlamps, and character lines that begin on the extended hood above the grille and flows along the sides towards the rear of the vehicle. In the rear, the deck lid wears an integrated spoiler lip resembling a unibrow over “angry-eye” angled tail lamps. 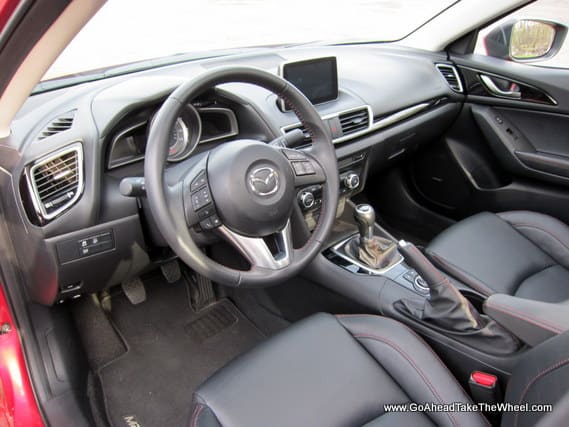 The cabin of the 2014 Mazda3 is a nice place to be. There is a mixture of hard and soft touch plastics all around, but the look is pricier than it is, and the fit and finish are nicely done.

The front seats fit my 6’1” 185 lb frame perfectly with the exception that I would have liked an adjustment to raise the front of the bottom seat cushion, but that’s just nit-picking. It’s nicely bolstered on the side so that it’s supportive but not confining. The seats in our test car are more supportive and comfortable than in my first-gen car because with the 2014 Mazda3, you feel like you’re sitting in the seats instead of on them. The driving position is great too, as you are able to tilt and telescope the steering wheel to the right position. 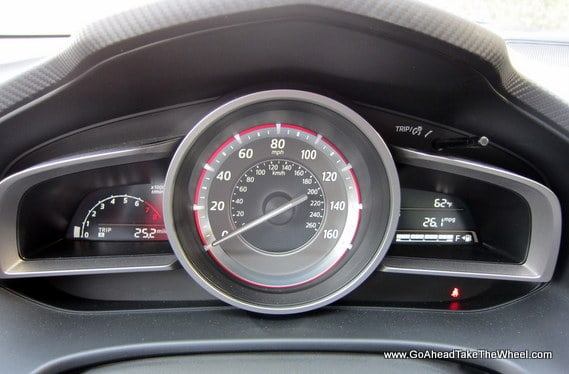 An interesting area where I don’t quite understand Mazda’s 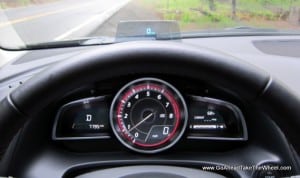 logic in the 2014 Mazda3 is regarding the redesigned meter cluster. In our i model with the manual transmission, a large analog speedometer is centered directly in front of you (above). However, the digital wing shaped tachometer to the left of it is tiny so you can barely see it. When I drive a car with a manual transmission, I like to be able to see the tachometer so I know when I’m nearing redline. On the other hand, the 2.5L with the automatic transmission gets the  big tack centered directly in front of you (right pic).

Mazda’s new infotainment system called MAZDA CONNECT is now available in the 2014 Mazda3. Mazda says it was designed with ease of use and safety as top priorities, as well as ensuring the driver’s focus remains on driving. Nonetheless, I find it distracting and more complex than it should be because simple tasks can require multiple selections, similar to BMW’s iDrive.

nd of, but this is just personal opinion, is the 7” display. It looks like it was an afterthought in its placement sitting right on top of the dashboard, just like the one in the Mercedes-Benz CLA-Class.

On the other hand, I really like the sound of the Bose® 9 speaker surround sound system. It’s a huge improvement over the premium Bose system in my first-gen Mazda3. The new system fills the car with a wide range of quality sounds from high to low that leaves my car’s system sounding flat.

Mazda defines Zoom-Zoom as the emotion of motion. It’s that exhilarating, connected-to-the-road feeling driving enthusiasts love. This is the feeling I get every time I get behind the wheel of my Mazda3, especially after driving point A to point B vehicles that are not designed with this formula. 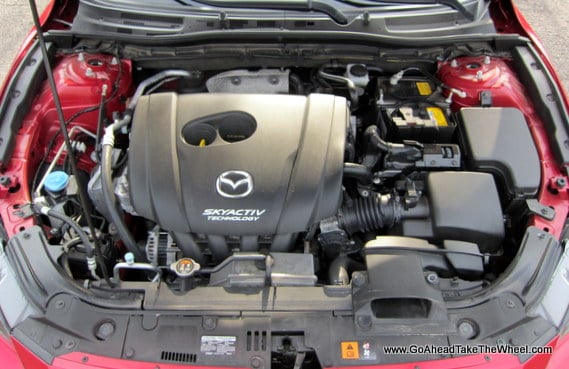 The 2014 Mazda3 is offered with two engine choices: a SKYACTIV-G 2.0-liter and a larger SKYACTIV-G 2.5-liter. Both of these engines are direct injected and normally aspirated.

Although the new base engine has more torque at lower rpms than the larger engine in my car, and it is more fuel efficient, the new SKYACTIV engine is not as silky smooth, and almost sounds like a “modern-day” diesel by comparison. I’m using the term “modern-day” diesel since some of them are now very smooth and are almost gasoline-like in their sound and lack of odor.

While my first-gen Mazda3 came standard with a 5-speed manual transmission, the 2014 Mazda3 i is currently offered with either a standard six-speed manual or optional automatic, but s models are only currently available with a six-speed automatic.

When accelerating in the 2014 Mazda3, power comes on smoothly, but it feels most lively above 3,000 rpm all the way up to its 6,500 rpm redline. One major complaint I have with my first-gen car during acceleration is that it can exhibit some really violent wheel hop as the front tires lose grip with the pavement. Fortunately, I didn’t experience this with our third-gen test car.

Steering and Handling are areas where I noticed a more significant change in feel between the first and third generations of the Mazda3. My first-gen Mazda3 feels sharp, responsive, agile, and can change directions with ease. However, our test vehicle came with winter tires, which significantly impacted anything that connected the driver to the road. Because of this, I couldn’t get good feel for this vehicle at its limits. The sidewalls of the snow tires made the vehicle feel relatively unstable at highway speeds, and the car slid around on the pavement during moderate to aggressive maneuvers at slower speeds. On the other hand, I did drive the 2014 Mazda3 s with ultra-high performance Dunlop SP Sport 5000 tires a couple of weeks after we turned in our test vehicle and did not experience any of the issues we had with the winter tires on the i model. The s model with the ultra-high performance tires feels more in line with my first-gen Mazda3, but I’ll give a slight advantage to my first-gen Mazda3 in this category.

Safety has come a long way since the first-gen Mazda3. While advanced dual front airbags, anti-lock brakes with electronic brake force distribution, dynamic stability control, and traction control were touted in the first-gen Mazda3, the 2014 Mazda3 introduces several all-new safety systems under the umbrella Mazda calls i-ACTIVSENSE. These new safety systems use radars and cameras to help the driver recognize road hazards, and reduce the possibility of accidents and potential damage to the vehicle. Some of the safety features on our 2014 test car include a rearview camera, Blind Spot Monitoring which alerts you when it detect objects in your blind spot, and Rear Cross Traffic Alert which alerts you when oncoming vehicles are approaching while you are backing up. I found this really useful when backing out of my driveway, and while pulling out of parking spaces with large vehicles obstructing my view.

Available on the S Grand Touring are additional optional safety features including but not limited to Lane Departure Warning System which monitors the lane markings on the road and issues a warning when it predicts that the vehicle will unintentionally depart from its lane, Forward Obstruction Warning which issues alerts when it determines a high risk of collision, Mazda Radar Cruise Control which will automatically adjusts the cruising speed in order to maintain a safe distance to the vehicle in front of it, and Smart City Brake Support which helps minimize a collision when traveling at speeds less than 19 mph by reducing brake pedal travel when it detects a collision, and brake automatically if the driver fails to do so.

The 2014 Mazda3 has evolved in many ways over the past decade. It has new styling, more powerful yet more efficient engines, a new infotainment system, and advanced safety features. When behind the wheel, it may not feel exactly like my first-gen Mazda3, but it manages to retain what makes it a Mazda3. It’s fun to drive, attractive, comfortable and affordable.