For quite a while now I’ve been wanting to bring my car to the dyno to get a feel for the health of the engine. At this point it’s fairly old and believed it was down on power. My assumptions were accurate unfortunately but overall, it was still a strong running engine. This just means that Jake and I need to focus even harder on our driving, which isn’t such a horrible thing.

The past few weeks have been quite busy with back-to-back race weekends. The first weekend was at Lime Rock Park, my home track. It’s always been a special place to me and brings many memories of my father and I attending the pro Memorial Day races. Never would I have I thought that I’d be one day racing on the same track.

Overall the weekend went by relatively smoothly although I did feel self-imposed pressure to do well with my wife, kids, father, and some neighbors coming to the event. A few very strong ITA cars / drivers were there but I was feeling good and ready for the challenges. I qualified on ITA pole then earned three consecutive race wins! I was honestly not expecting these results but am extremely pleased!

During impound on of my fiercest competitors who absolutely does not like losing to me, congratulated me and said he heard about my engine being down on power. While I’m sure he had to loved hearing that news, he told me that he has a good engine core in his basement that I could have at a modest price. This is yet another example of why Club Racing is so fantastic.

In addition to my driving the car, Jake Gulick drove it in EP where it’s outclassed, yet at Lime Rock power isn’t quite as critical and somehow in the main “feature race” he took home the win.

When planning our racing schedules, we took for granted just how quickly the turnaround would be to the Watkins Glen race, which when said it’s on 4th of July weekend sounded so much further away than reality. It was a bit of an odd race weekend format with three qualifying sessions and just one race, but our primary goal was to further develop our program – car and drivers. 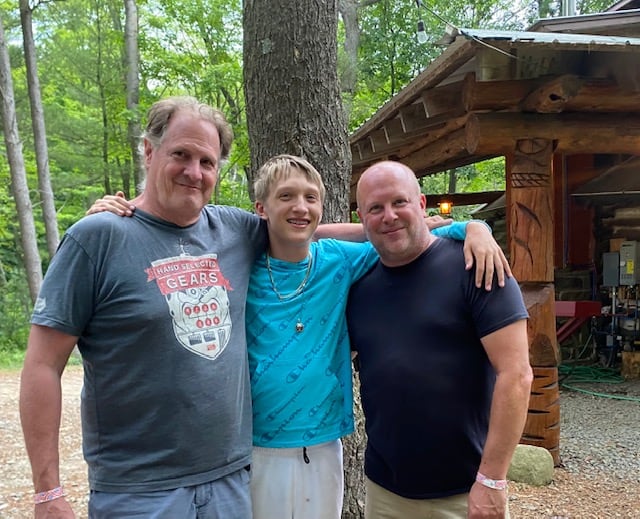 Jake, Isaac and his dad Dave

This time I was driving in EP. The session prior to my qualifying race a car blew its engine on the front straight where they laid speedy dry to absorb it. I’ve driven on speedy dry before so wasn’t overly concerned. The first half of the session I avoided it but couldn’t brake as deep as I would have liked and didn’t think much of placing two tires on it while going in a straight line. I was wrong. All of a sudden, I felt the front snap to the left and that “slow motion visual” began as I approached the ominous blue Watkins Glen guardrails. Fortunately, the hit was mostly parallel so the damage could have been much worse than it was. That said I was not able to drive it back to the paddock and was going to require work before it could go out again. Oh, just to add insult to injury a rainstorm came through just as the tow truck driver and I were trying to get the car on the flatbed. I personally felt like I somewhat deserved that but felt bad for him. 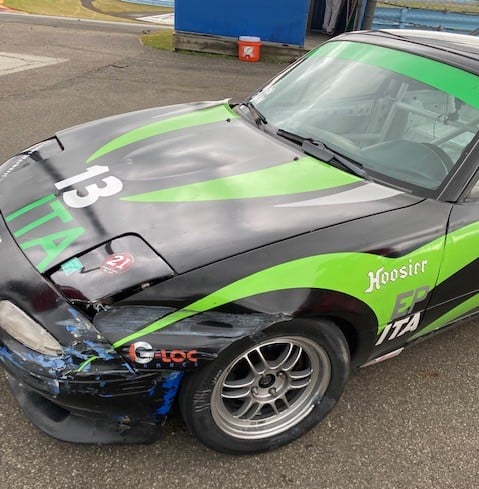 With Jake being much more mechanically inclined than me (I realize that doesn’t say much lol) we began diagnosing the damage. One item which quite obviously needed repair was the tie rod. Ironically at the previous Lime Rock Park race, a friend gave me two new tie rods that he no longer could use since he changed cars. How lucky was that?! (Big thank you to Marc Ulan.) After an exhausting day of working on the car we wrapped things up and went back to the small cabin we were sharing with some friends and my 14-year-old son Isaac. 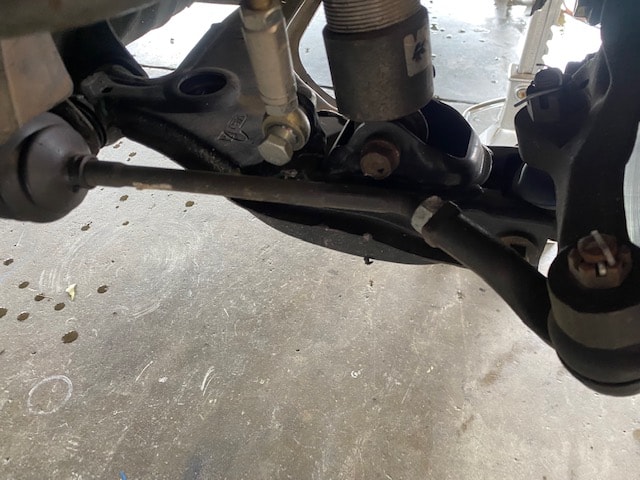 That horrible annoying alarm sound went off the next morning prodding us to be back at the track by 6:30 am to keep working on the car. Jake reminded me that these are the times we’ll remember racing, when it takes perseverance to make it all happen. A few hours later and Jake working his magic, we felt like the car was race ready. 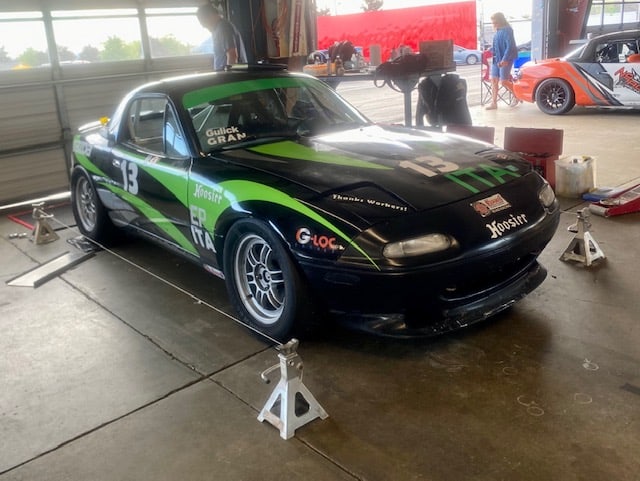 Jake’s ITA race was really entertaining to watch as not only was it a great race, the first place ITA CRX (yellow car in the video) driven by Kyle kept having the door open in turns! They battled it to the end and while extremely close right to the last turn, Kyle took the win. There were certainly times throughout the race where we were surprised he wasn’t black flagged, especially when his door flung open and hit our Miata! See the video at the 25:30 mark. (We did not file a protest, but it was a bit questionable for sure.)

While I didn’t have a shot at the EP win, I most definitely did not want Jake to beat my fast times as badly as it currently stood. Jake’s fast lap was 2:18.31 and prior to this session, my times were in the 2:20s. If that remained I knew that I was never going to hear the end of it.

Of course, while on grid, workers informed us that there was a car that dumped oil in Turn 1 and Turn 8! My stomach sunk as I heard this given my recent incident in Turn 1 on speedy dry. As the session went

on, I gained more confidence and thought I was going pretty quick, yet the in-car data acquisition dash was telling me otherwise. I needed to push harder! Then for some reason the dash turned off so I had no idea what my lap times were anymore. As I drive back to the garages, Jake met with me a shake of the head and “congrats on your times jerk” type of reaction. I looked at him a bit puzzled but he informed me that I managed a fast time of 2:18.14!

Given the adversity we faced, this was quite a successful race weekend and one I know that I’ll remember for some time now. Oh, my son and friends who made the 5-hour trip to watch me race? They were waiting in the garage not knowing I was even out on track and missed everything!

Special thank you to Hoosier Racing Tires, G-LOC Brakes and of course my wife Melissa Gran who all make this a reality.