In years past when I heard the Hyundai name, the perception that came to my mind was cheap. Although this may not have been true of the manufacturer, it was my assumption. I admit to being a believer of the saying “perception is reality.” While I recognized the manufacturer had made great strides, I never really found myself looking into the vehicles they had to offer. The previous version of the Genesis Coupe slightly intrigued me, but still not enough to look into it further. However, with the styling and performance updates the 2013 Genesis Coupe received, all of this changed. 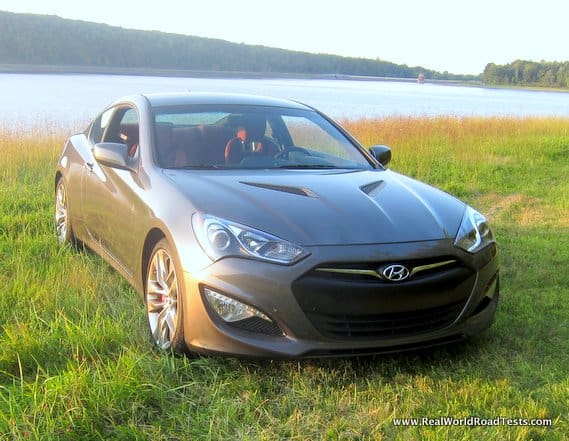 If you’re new to the Genesis model, it’s a bit confusing as there’s a Genesis (shown on right) and a 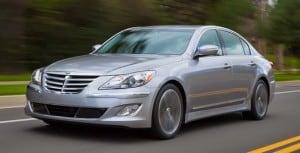 Genesis Coupe (above) which are very different cars. While it may seem that they are directly related and the difference is merely between one being a sedan and the other a coupe, that’s far from the case. The goal for the Genesis is to be a luxury model, whereas the Genesis Coupe is a sports car.

When the Genesis Coupe 3.8 R-Spec arrived for testing, my first reaction was to notice how much better both the exterior and interior look in person. For 2013, the car received several updates starting with a new front fascia, headlights, fog lights and hood accents. The side gets deeper sculpting, new wheels, and the rear tail lights are now illuminated by LEDs. While it’s not a small car by any means, it’s not as large looking as one might think. I personally tend to like smaller cars – I own a Honda S2000 and race a Miata after all. While the Genesis Coupe is only 6 inches shorter than a Mustang, which I consider to be on the large spectrum, it just seems much smaller. 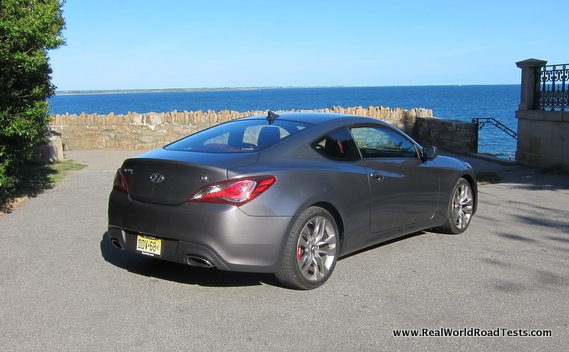 Overall I think the car has great lines and styling cues, although I wasn’t overly fond of the “hood accents” designed to look like hood vents. It had me wondering if Hyundai should have instead incorporated holes into the pieces and called them heat extractors? Some Genesis Coupe owners have taken the accents out and replaced them with vented pieces. While I believe it looks better, it does lead to the issue of water from rain and washing going in the engine along with dirt. Maybe it’s a good thing they’re just accents after all.

Inside the R-Spec model things are pretty basic and not packed with a lot of gadgets. There’s no navigation system, no powered or heated seats, no sunroof, and just a basic but acceptable stereo system. There isn’t even cruise control. Yet as a sports car, I have no problem with the lack of these items as I was more than engaged with the driving experience. If you desire more tech items, options or black appointed interior, the Track and Grand Touring models come more equipped. Ironic isn’t it? The Track model comes with heated and power seats, a sun roof, and a rear spoiler. All of these items equate to additional weight, exactly opposite of what one wants for a track model. Odd designations. 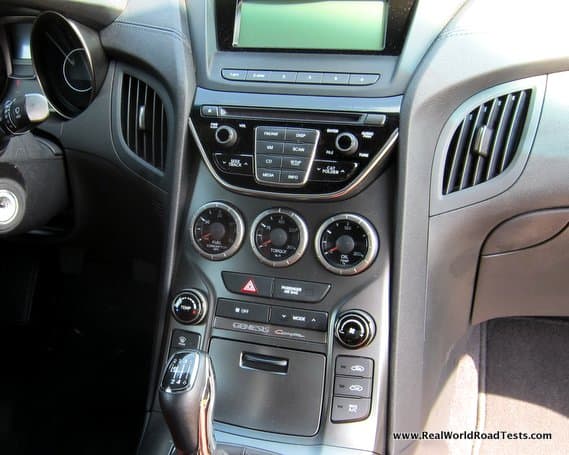 In an attempt to seem more attuned to the enthusiast, Hyundai added three gauges mounted in the center of the console. While I’m sure these will appear cool to some people, I feel they are pretty gimmicky. The gauges included are fuel consumption, torque, and oil temperature. I found myself looking at the torque gauge, getting depressed seeing the fuel rating so low, then wondering why I’m not paying attention to where I’m driving. The oil temperature gauge is somewhat useful but even for track use, an oil pressure gauge would be preferred. Even if you think the gauges provide value, they are positioned in a way that they’re somewhat difficult to read from the drivers seat. 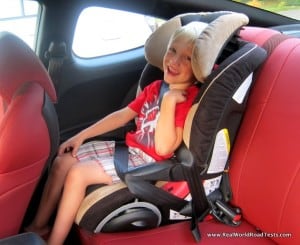 While the car is not small, this is where that extra size really pays off – functionally. I recognize that many of you will say that you don’t care about the back seat, but it’s nice to at least have some room back there. I have often found my wife and I leaving our two-seat sports car at home since we can’t bring anyone else along for the ride.  We even fit four adults comfortably to and from a destination over an hour away.  The caveat: do not ask people over 5’5″ to sit in the back – there is plenty of leg room, but little head room.

Beyond the back seat room, the car also has a useable trunk which is far from the norm with sports cars. The one challenge is that the entry into the trunk is a bit narrow, however it is 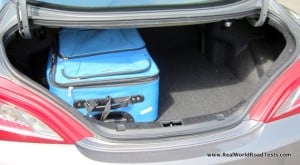 plenty deep. And while the rear seats fold down for longer objects, the opening leading into the cabin is only about 35” wide by 9” high but the fact that the opening exists is really just a bonus.

While the improved looks command attention, its performance is really what sold me on this car. It is powered by a 3.8 liter V6 engine producing 348 horsepower and 295 lb-ft torque. This represents an impressive gain of 42 horsepower and 29 lb-ft of torque compared to last years model. Yet at the same time while driving it, I wasn’t blown away by the power. Although you won’t feel being pushed back into your seat, the car does have some balls and we achieved a 0 – 60 time of just 5.2 seconds. The car is not all about its power; it presents a well-rounded driving 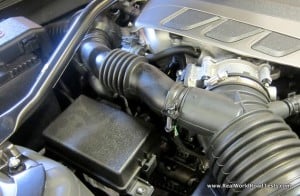 Ducting for the "Sound Generator"

experience. Hyundai not ignoring how a vehicles sound factors into the experience, integrated a “sound generator”. This essentially is a tube ducting exhaust notes from the engine bay into the cabin. While it might sound silly to be able to have the windows up and air conditioner running while enjoying the exhaust medley, I loved it! At the same time while cruising on the highway, the inside cabin noise is kept to a minimum.

To keep up with the added power, Hyundai made noticeable improvements to the suspension and equipped the R-Spec and Track models with a Torsen limited slip differential. The car also comes outfitted with a five link suspension which is supposed to be better for holding the rear axle in place (shown below). For those of you who plan to take the car out on the track or autocross it, you can install the supplied front strut camber adjustment bolts that come with the car. Using this, the car can achieve approximately 1 ½ degrees of negative camber in the front to further improve the front grip. (Our testing was completed using the OEM alignment and camber settings.) The cars great handling characteristics was a bit unexpected, but much appreciated. Driving around on curvy roads is where everything about this car all comes together. The ride feels well connected to the road and provides just enough feedback without being overly harsh. Even the steering wheel itself feels sporty and has crisp input. 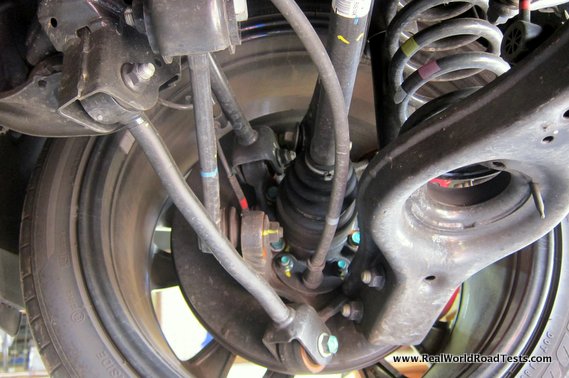 The only complaint I had about the cars handling was how the traction and stability controls are applied when driving in a spirited fashion. The first time I experienced it, I was taken a bit off guard as the nanny controls briefly but suddenly shut all power down. While it has a purpose depending upon the driver, the road conditions and how you’ll be driving the car, we got accustomed to turning them off upon start up. While the transmission received improvements for 2013, there are still reports of people experiencing a difficult time downshifting from 3rd gear to 2nd when driving hard. Although I felt that shifting was a bit notchy and fussy when shifting quickly, we did not experience any noticeable issues.

Although I wasn’t overwhelmed during my first test drive with the car, the more I drove it the more I it really grew on me in just about every aspect. It’s a fun car to drive, yet doesn’t sacrifice all functionality for daily use. When you consider its $29,625 price tag which includes freight and handling, it’s a very good package that I’d absolutely recommend.

When discussing engine performance of a vehicle, its commonly known that many manufacturers game horsepower numbers. We heard some grumblings that the Genesis Coupe 3.8 numbers were exaggerated possibly because they’re not SAE certified, therefore decided to put it on a dyno. We put it on a Dynapack courtesy of Kessler Engineering, one of the North East’s premier race shops. The day we completed our testing, it was 91 degrees outside which is not ideal horsepower producing temperatures. Yet the car tested well producing 305.5 horsepower at 6,789 RPM and 257.6 lb-ft of Torque at 5,742 RPM at the wheels. (The Torque chart is included in the below gallery.) 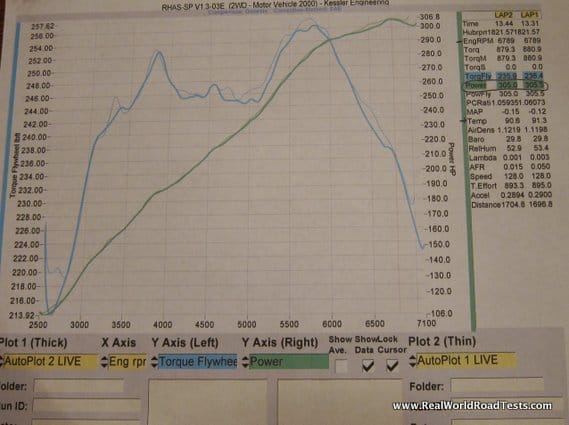 In order to compare the dyno horsepower results to Hyundai’s claimed performance numbers of 348 flywheel horsepower, we used an 18% drivetrain loss factor. Using this calculation, we were able to extrapolate an approximate horsepower number of 295 at wheels, compared to the 305.5 wheel horsepower measured on the dyno. As a result, we feel confident that the manufacturer numbers are accurate and if anything, a bit underrated.

Hear the power, see how it drives, and check out the dyno runs in this video.
httpvh://www.youtube.com/watch?v=Onm3pd_St24

Genesis Coupe Models
There are multiple trim levels available, from the base, manual transmission turbo four-cylinder 2.0T starting at $24,250 all the way up to the V6 3.8 Track with a new eight-speed automatic transmission, at $34,250.