iRacing and Reality – How Close are They?

If you are new to reading this series, you can click on the Categories drop down on the right side of the page to read more Sim Racing articles.

I have been racing in SCCA’s Improved Touring category for 17 years now and have really taken the time to study and continually improve. Even after achieving many wins and even the occasional track record in my class, I am never satisfied with my performance. I always want to be better.

Seat time, seat time, seat time! As far as means of improvement, it is hard to beat actual time behind the wheel on the track. There have been years where things have worked out for me to get a fair amount of seat time, and I absolutely agree it’s extremely helpful to be fast and consistent. Yet at the same point, unfortunately, it often just isn’t possible for some of us to get on the track often due to the cost, limited time off from work, or other factors.

Approximately eight months ago I built a rig for iRacing in the hopes that it would not only keep me fresh in the off-season and during the racing season, but also be a fun new hobby for my free time. But my primary goal is to use the simulator to improve my performance on the track. Although I built the simulator on a relatively low budget shown here, it still wasn’t cheap. It was an investment of time and money. My main questions were how does iRacing compare to real world racing, and will what I learn from it be applicable on the track? 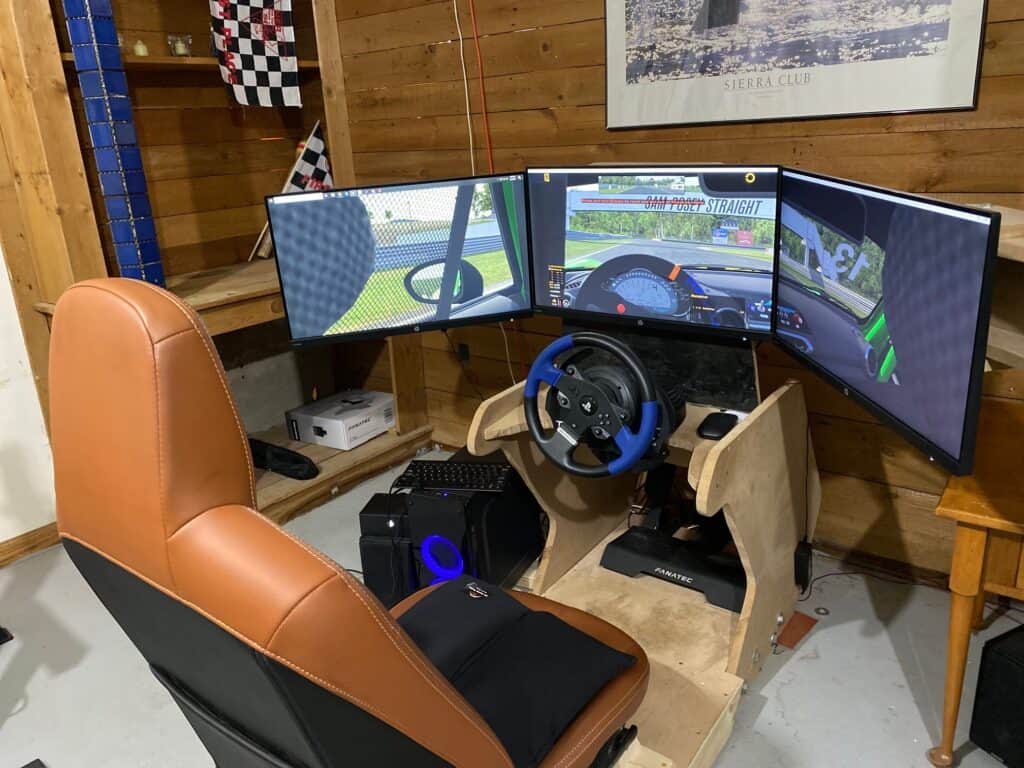 As time progresses, I continue to gain an appreciation for the simulator and the iRacing software. At times I have been caught by surprise by how closely it mirrors real life racing, but unfortunately there are other times where it simply falls short.

At first I really struggled racing on the simulator, but with some coaching I discovered I needed to adjust the angle of the screens and my seat (I will dive into simulator setup tips in another article). Once I had things properly setup I feel much more connected with the car and track. I am pleasantly surprised by some of the physiological aspects of sim racing.  For example, when I am “virtually” on grid for a race I feel that anxiousness of “lets get this race started already” and “I hope we can get a good clean start” which is fairly similar to how I feel in my real world racing experience.  During the sim race, when cars are right up on me turn after turn, I actually feel my hands begin to sweat and recognize the need to really pay attention and hit my marks. This is awesome!! I can recognize that this is helping to train my brain to increase focus and forcing me to stay disciplined while I drive.

Assuming iRacing has the updated track layout, it’s a great tool to learn a new track or just keep things fresh in your mind. Unfortunately, I have encountered a few tracks that are outdated or used in configurations that would not be used in real life and it is not always obvious. Many tracks you can distinguish this by the track name in iRacing have an older date after it.  Even for tracks that might be slightly outdated such as Watkins Glen, the differences often are not overwhelming to a point where driving these tracks won’t be of value. Overall though, iRacing does an amazing job at re-creating tracks thanks to laser-scanning which captures everything from cracks in the pavement, defining camber and undulations of the surface. If you are using it to learn a track you are unfamiliar with, it wouldn’t hurt to confirm it is the up-to-date version.

For someone with little or no prior track experience, a racing sim does a nice job of teaching basic concepts such as braking techniques, understanding the racing line, managing how throttle and steering inputs are applied, and basic race craft. Heck, even for a fairly fast, experienced driver, there is plenty to be learned by using sim racing. 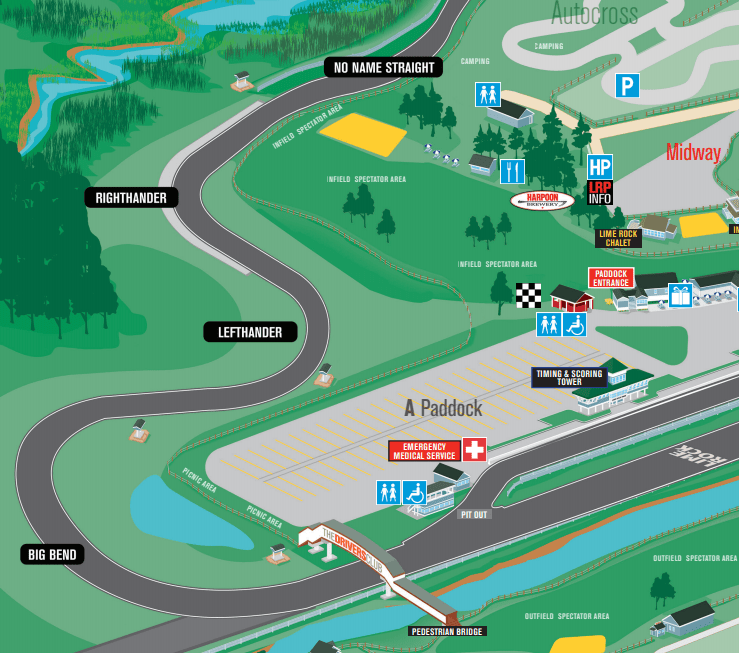 Here are real life examples from my personal experiences: At Lime Rock Park, in real life I’ve known I am leaving time in Big Bend (turns 1 and 2) as well as the Left Hander.  Almost the identical things occur when I drive the MX-5 in iRacing compared to the Miata I race. What I learned is my entry speed was too slow and I was forced to get back on the throttle as a result in the middle of turn one. Then in between turns 1 and 2 which essentially creates one big turn, I was carrying too much speed causing me to sacrifice exit speed. From there, on the left hander I was too abrupt getting off the brake pedal therefore upsetting the balance of the car causing the rear to become loose. Utilizing iRacing and Virtual Racing School‘s data telemetry (we’ll cover this more in future articles), I was able to see all of this first hand. What I thought was pretty crazy is that all of this happens to me in real life when racing. Gaining this awareness and ability to practice better techniques using the iRacing simulator has been eye opening to say the least.

There are multiple other similar examples at other tracks that I know well and have consistently run at the front of the pack in real life. The point being is I am not talking about a novice driver who is on the very beginning of the learning curve, but as someone who is trying to really hone their skills and looking for those last tenths of a second.

iRacing does have its limitations and areas that it simply cannot replicate.  A big one that I have experienced is that it inspires over-confidence. Last year at Lime Rock in an SCCA race I found myself driving the downhill a bit too over confidently where I was right at the edge leaving absolutely zero room for error. If you’re not familiar with this turn, it’s one where if you get it wrong there are significant consequences and little room for error. You might be wondering what’s so bad about about being right on the edge as that’s exactly what you want, right? In theory that’s great but I also quickly reminded myself there is no reset button. This slap of reality actually hit me as I drove just slightly over the limits and felt the rear get loose as it touched the grass. I caught it, but it was close. 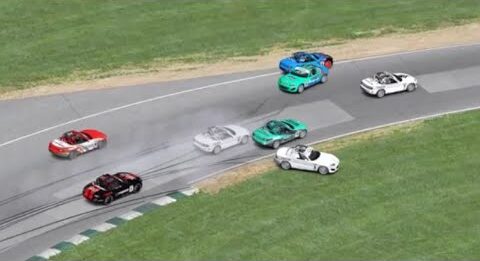 This leads to how the simulator simply can’t capture that “OMG, I’m going to die!” feeling as one grits their teeth while barely keeping the car on track.  Or when you have an off course excursion, there’s not that sense that if you wreck, it could actually really hurt. As a result of this, drivers in sim racing can and do take more chances. I’ve also encountered that you can get away with a lot more in iRacing such as cars putting the outside wheels off into the grass in a turn merely collecting an incident point against your  iRacing Safety Rating versus going off or at least causing the car to slow down as would happen in real life.

Sim racing also can’t capture other real world sensations such as being in an extremely hot race car with a racing suit, feeling sweat build up in the helmet and starting to drip down, all while resulting in less focus. You don’t  feel the car accelerating, and G-forces in the seat all while maintaining focus and absorbing what is happening to the car. These extra senses are things I personally rely on to determine what the car is doing and how to get the most out of the car. It takes time in the simulator to rely on other senses to make up for these lost senses, but that’s not a bad thing per se as it will help in your real racing efforts. 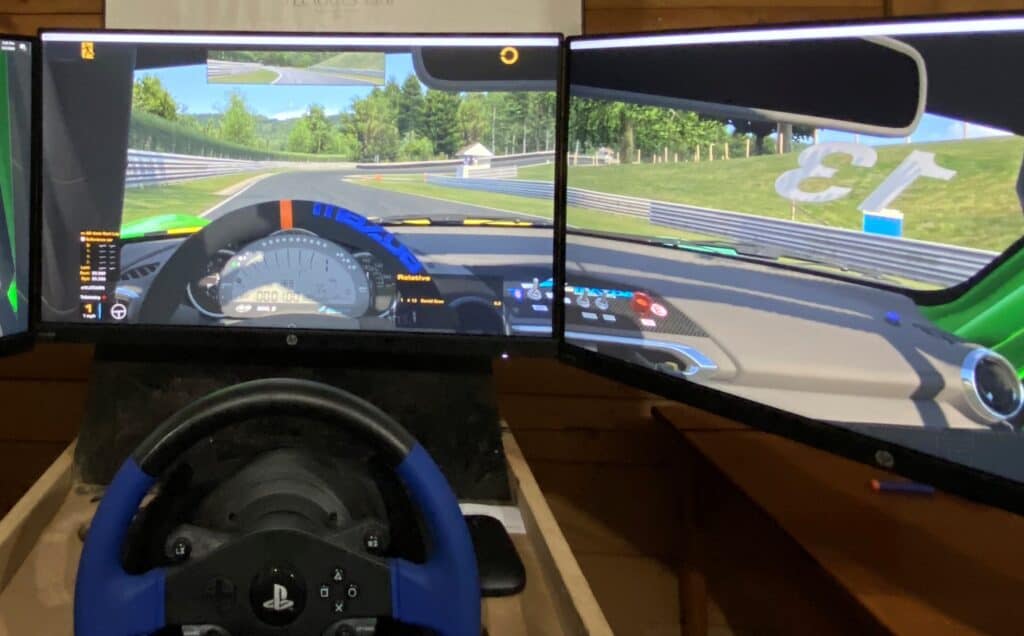 One last area that might be overlooked that sim racing often lacks is related to flag stations and how they are almost just a background in iRacing but ever so critical to be aware of in real life racing. In the above picture, you can see the flagger station just to the right of the track. If you decide to transition from sim racing to on real on track driving, it will be critical you gain this awareness. What I would recommend is to drive the tracks in iRacing slowly and learn where the flag stations exist. They are there just not important when driving the simulator.

When doing the simulator, I often need to remind myself not to compare myself too much to other drivers who are much faster. At one point at Watkins Glen I stated really doubting myself thinking just how badly I am there. At that point it was time to step away and regroup. (It’s one of my favorite tracks in real life and have several race wins and a track record at.)  The point being is don’t get down on yourself, there’s a reset button and plenty of opportunities for sim racing track time. I’ve also discovered that  many sim drivers have hundreds of hours doing it. My thought is as one as you’re continuing to learn, improve and have fun, that’s all that counts.

Overall, I have to say that I am truly impressed with how much the iRacing sim correlates to real-world racing. For those who are still skeptics, think of how we racers used to only be able to rely on mental imagery and how truly effective that can be. This is just a much more fun, engaging, modern-day approach. Selfishly, I hope my competitors do not buy into iRacing as it’s just one more tool I can use to gain an advantage.