Whether you have interest in doing sim racing by itself, are an aspiring racer or an experienced racer, this series of articles is for you!  There will be a ton of information covered such as how much it costs to build a racing simulator, suggestions on what specifically to purchase, experiments on if sim racing actually translates to real life improvements, obtaining online coaching from Virtual Racing School and so much more.  Buckle up and I hope you join me for this ride.  I look forward to you sharing your questions, feedback, and overall comments along the way.  Let’s go!

A few years ago I used a friend’s very simplistic iRacing setup which consisted of a PC, a single computer screen and a steering wheel with peddles. I chose to drive a Mazda Miata at my home track, Lime Rock Park, both of which I am very familiar with.  I quickly became frustrated as I couldn’t even get around the track for a clean lap after multiple attempts even at fairly low speeds.  I never touched it again for several years.  I thought that because I drive a lot by feel, the lack of sensory inputs were one reason why I couldn’t get around the track.  I also questioned the simulator software itself.

Last year at a pro race at Lime Rock Park, I stumbled upon a full motion rig integrated with iRacing.  While I still had reservations, something told me that I just had to try it and see if I felt differently about it now.  This intro session only lasted about 15 minutes and while I still found it challenging, I could envision improving with practice.  I realize nothing compares to real on-track seat time, but at the same time most of us are limited to how often we can go out on the track due to limits of money or time.  Knowing I couldn’t easily resolve those obstacles, I felt it was worth investigating use of simulators to improve my on-track performance.  The more that I analyzed the potential benefits, the more that I realized this gamble would be worth taking.  Plus when I hit stuff, it won’t hurt my wallet. Just reset and try again!

In the past I’ve used games such as Project Cars and GT5 using a steering wheel / pedals, PS4, and a TV.  While I was actually am impressed with both of these games, I wanted to step up to something that was truly designed as a racing simulator and provided better driving physics.

I spoke with several experienced racers and companies who rent racing simulator time, and each one based their simulator off iRacing software.  After further research I became convinced that iRacing is the best racing simulator software currently on the market for the typical Club or “lower level” Pro Racer (meaning not a multimillion dollar F1 team). 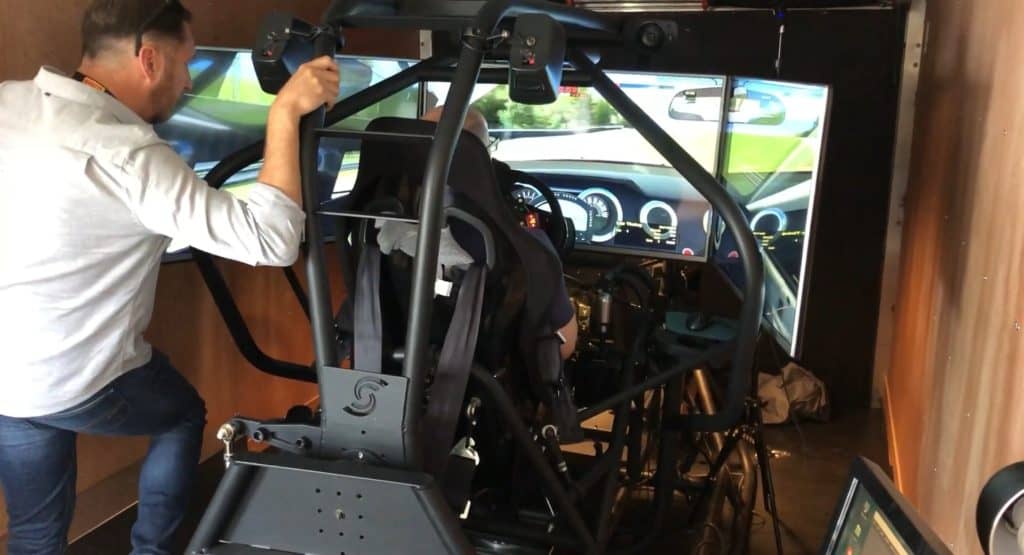 At first I looked into renting time in a sophisticated rig based off iRacing that has a race seat, belts, roll cage and motion like the one I tried at Lime Rock shown above.  The rental rates which seem pretty standard are around $150 for 2 hours with some coaching and data analysis.  I was quite tempted to go this route, but it involved commuting over 2 ½ hours for each session I wanted to participate in.  With a wife and two young children this isn’t something I’d be able to do frequently.  If I was going to commit to using a racing simulator and truly get the benefits from it, I knew I’d need to invest more time to using the tool which meant having one at my house.  That said, if you’re fortunate enough to live near a full motion simulator, I’d certainly recommend you give it a try.  I do plan on still renting time occasionally to see if the motion and more sophisticated rig will further help me.

The full motion simulator I tried by Artis Race Labs is based out of Lakeville, CT.  In addition to going to their location, the simulator is housed in a car trailer, making it capable of being rented for other nearby locations. They offer free introductory sessions so it’s certainly worth checking out if in the area: http://artisracelabs.com/ .

Deciding that I’d like to have a simulator at home was the easy part; there are so many options in building a setup it was pretty overwhelming at first.  One requirement of mine was that I needed to build the simulator on a relatively modest budget, but I also knew it wasn’t going to be cheap.  I hoped for doing it for around $1,500, but like much in racing knew there was potential for that to grow by a few hundred dollars depending on what other “necessities” I came across along the way.  While somewhat intrigued with virtual reality, I wasn’t sold on the technology being where it needs to be at this point in time. In addition to that, I have two young children who I thought might enjoy the simulator.  The Oculus Rift and Samsung’s Gear VR headset have a 13+ age rating, so that didn’t fit into what I was looking for.  I also felt that the three-screen option would be fun to use with friends, hanging out and enjoying watching each other race around.

I considered purchasing a cockpit kit online that would only require fairly basic assembly.  The options that appealed to me either cost more than I wanted to spend or didn’t seem as they were high enough quality.  An example of the numerous cockpits found online that I looked at is from GT Omega which costs $630 shipped excluding tax (it does include a seat).  Although it is higher than my budget, it seems like it could be good option.  Then again not being able to see it in person or knowing anyone who has one made me a bit leery about it. 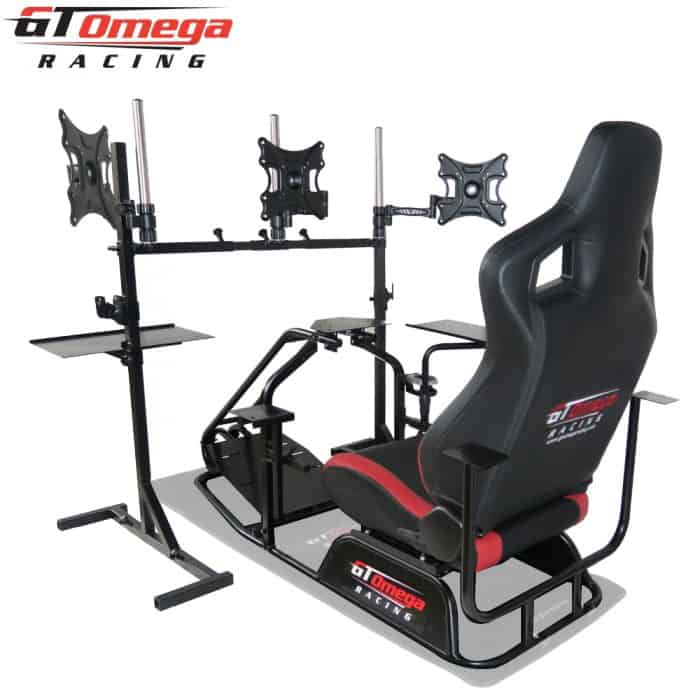 After asking around what other people are doing for a cockpit, a friend showed me a picture of a rig he built out of wood using plans purchased online from a company named Ricmotech.  Hearing about how happy he is with the cockpit peaked my curiosity.  Looking at the various plan options they have and getting an idea how much it would cost to build, I decided to pursue a similar route.

The cockpit he built only has a single monitor but I wanted to use three monitors since even when using one large screen, it’s just not possible to obtain the same visual experience.  With the two additional monitors you are really able to have a much larger and more realistic view from inside of the car.  Fortunately one of the plans Ricmotech offers supports three monitors.  Another motivation for me moving forward with this option is that I thought would be a fun build project.

In our next article, we’ll go through all of the items I purchased along with the actual costs incurred in building this simulator.  It will also include links to where you could purchase the items to hopefully make this build process easier for you.  I’d love to hear your feedback in the Facebook comments section below.  Also don’t forget to share this with others who might have interest!