While building a nice racing simulator does take work and can be a bit confusing, this article provides you a recipe of the various items that I researched and then purchased.  As with any recipe you can tailor it to your needs.  My goal when deciding which items to purchase was to build a simulator on a modest budget while ensuring that it could handle iRacing at optimum or near optimum settings. I have been very pleased with the end results.

The cockpit is one of the key pieces of your racing simulator.  As discussed in the previous article I opted to use a three monitor system and purchased DIY plans from Ricmotech to facilitate this.  Here is a link to the set of plans that I purchased. 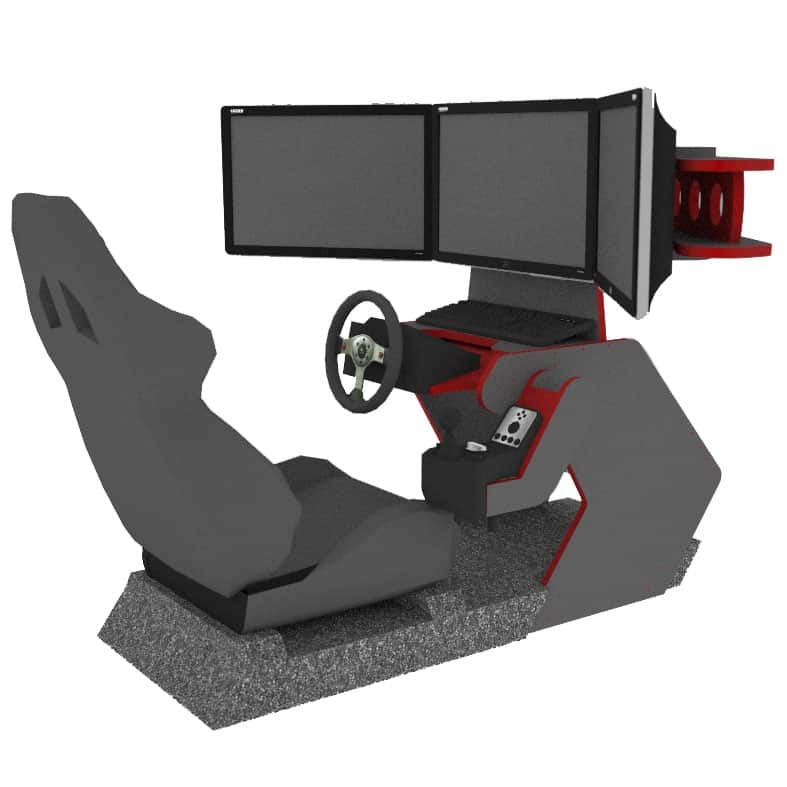 As you’ll see in the next build article, the plans are full size CAD designed to full size that you trace on the wood and cut out. Upon placing an order, they even send you an e-mail with the required materials so you can purchase them while the plans are being shipped.

Gaming Computer  Prices vary significantly; I paid $795 for my computer

This was the most daunting aspect of my purchasing decisions as I do not have a lot of knowledge in computer hardware. When attempting to figure out exactly what specs I needed, I wasn’t able to obtain a fully defined list of the specs that are required to run iRacing at optimum settings even after contacting iRacing directly. iRacing does provide a list of minimum specs here, but that’s not what I was seeking. The specs iRacing lists are really to show that just about anyone can use iRacing, however that would require sacrificing too much of the experience such as using a single screen and not optimum settings. As an example, they list the minimum requirements of 8 GB of RAM but to run the software at high settings I learned that 16 GB is recommended. As a result of not knowing what I truly needed, I had to rely on a company that I felt I could trust to buy a PC from which would be able to handle iRacing.

The company where I work full-time for gets a discount from Dell, so at first I thought that would be the easy and least expensive option. Dell has a line of computers named Alienware which I have heard of, so thought that was looking favorable. I asked a few people what their thoughts were about the PC that I was looking, but was told by multiple people it wouldn’t be powerful enough.  They do have higher end PCs in the Alienware line, but it was beyond my budget. As with many things I really believe that you are paying a hefty premium for the Alienware name brand. Next I visited Best Buy but once again their gaming PCs that would meet my needs also exceeded my budget by quite a bit. Briefly I considered building my own PC as I knew that would be the least expensive route, however, I didn’t feel comfortable building it and taking the time necessary to learn how build it. (There are tutorial videos on YouTube if you decide to pursue this further.)

When looking around the web for other options, I stumbled upon a small business that assembles computer parts much like Dell did many years ago. I spoke with them and explained what I was going to be using the PC for and that I wanted to be able to run iRacing on optimum settings using 3 HD monitors. They seemed quite knowledgeable and take pride in being “gaming nerds” so I took their advice on a system that would meet my needs and budget. While I certainly can’t guarantee it will fully satisfy you, by following the recipe that I purchased for a PC I have been happy with the end results. There are many settings in iRacing that also have an impact on the simulator performance as well as the speed of your internet service.

Note that if you elect to purchase larger monitors than I did or use Virtual Reality, it might be necessary to adjust the PC build specs. While I have not tried using Virtual Reality on my PC, I was told it is capable of doing so. Below is a link to their eBay store which lists the specs of the PC I purchased (I did upgrade it to 16 GB of RAM).

The following are the other hardware that I purchased along with links where you can buy them.

It’s known that the monitor speakers are not very good, but I had no plans on using that for the system’s sound so it didn’t matter to me.

Especially for the price, I’ve been very pleased with these speakers. Even though I also purchased a headset, I much prefer to use these for the sound as wearing the headset gets a bit uncomfortable after a while.

I also purchased a headset for when I wanted to communicate to others in the game or getting online coaching. It certainly isn’t necessary to have both which is why I only included the speakers in the previous budget calculations.  I personally find wearing the headset to not be as comfortable as using the speakers especially for longer periods of time (over a half hour or so).  I’m sure this comes down to personal preference.

You can also buy it used on eBay and Craigslist for ~ $120. Another popular option is the Logitech G27 which includes a stick shift for $300.

Wireless keyboard and mouse: $26.  This serves my basic needs for iRacing but wouldn’t call it a great keyboard if using it for other purposes.

Hey, you didn’t think it would end there did you? I have been very pleased with the components used in the above setup, but there are a few other items I have planned in the relatively new future which will further enhance the experience.