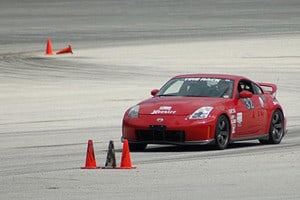 As I previously mentioned, one year as I was watching the Daytona 500 the need to race seemed to hit me all at once. I just had to find a way to become involved in racing. But how? I had very little money, which did not exactly help matters. I am not talking about low-budget-racing, but much closer to no-budget-racing. Regardless, that day I became determined to do something to get me closer to my racing dreams. You just have to love the internet! While on-line, I stumbled across information about autocrossing. If you are not familiar with autocross events (also known as Solo II), they are events where you can take your ordinary streetcar as-is, and race it in a very safe and controlled environment. When I say “very safe,” I mean in an empty parking lot where the worst thing you could hit is an orange cone. And no, it is not wheel-to-wheel racing, so you won’t have to worry about hitting another car. Each driver competes against other drivers in their respective class by taking a timed lap around a temporary course defined by traffic cones one car at a time. Of course, the goal is to drive the course as fast as you can. Ah, but you don’t have a sports car. No problem! You can race almost any type of car, regardless if it has an automatic or manual transmission. You will see everything from ordinary Honda Civics and station wagons to race-prepared cars. Due to potential rollover issues, sport utility vehicles are almost never allowed.

Let me ask you, have you ever wished that there were no speed limits or safety concerns to worry about while driving on an open, curvy road? Here is your chance to do it legally, and actually be encouraged to go faster. How cool is that? If you are picturing a cheesy course with someone timing you with a stopwatch, think again. In fact, most clubs have very sophisticated (and expensive) timing systems that calculate the lap time to a thousandth of a second. To make things a bit more challenging, you can’t just barrel through the course, knocking over cone after cone in an attempt to get a fast time. Each cone hit has a time penalty associated with it, which is typically two seconds. Knocking just one cone over will usually ruin that run’s time. Speeds on autocross courses typically peek in the 40 – 50 mph range and contain many turns to test your skills. These speeds may sound slow, but when you are out there yourself, that feeling will certainly change. It is much harder then you might think.

There are also many other areas you can become involved with, depending upon your interests. It certainly is not a bad idea to try volunteering in a couple of different areas. A few other areas for which you can volunteer include registration (where all racers, crew, and workers must go to check in for a race), tech inspection (where racers’ gear and cars are verified to be safe), and the timing / scoring booth. Some of these areas may seem a bit daunting at first, but any decent club will have people to coach you through the process. Since the focus of this resource is to help you reach the goal of racing yourself, I won’t discuss the other various areas for which you can volunteer. Just know that if you or someone else you know is interested in volunteering, there are many possible areas in which clubs would welcome assistance.

Initially, the course may simply look like a sea of cones out there. But after walking the course a few times, it will begin to make more sense. The first couple of times you drive an autocross, it seems that half of the game is to figure out where you should be going. As with almost anything else in life, after doing it a few times, it becomes much easier. I would recommend that you ask for an instructor to ride with you for the first few runs, until you get the feel for it. The instructor won’t only guide you through the course, but hopefully will provide suggestions on how to approach various sections.

One of the keys to any form of racing, especially in the beginning, is getting seat time. Focus on seat time and not the go-fast parts! It is much cheaper and more effective to spend your money on participating in more events.

In addition to the driving aspect, autocrossing is also a very social event. That said, one of the things that I have a hard time getting used to is the amount of time there is between runs. With the clubs that I have autocrossed with, there could be 45 minutes in between each run. Take this time to talk to more-experienced racers and learn as much as you can.

Not only are autocross events an extremely safe place to push you car hard, but it also provides valuable learning tools that apply to your daily driving. What are some of the things you will learn? How to control the car at its limit, thresh-hold-braking (braking to the maximum potential of your car’s braking system), and the importance of looking ahead. So if a deer jumps out in front of your car (or worse yet, a child), you will already have the built-in reflexes to react to the situation and the experience to control the car at the limit. In all seriousness (although it is a pretty good excuse to participate in the events), what you learn here could save your life as well as others. And yes, cone marks do easily come off your car if you happen to kill a few during an autocross event. The car control techniques you learn autocrossing will also be helpful to you when driving out on a racetrack.

An autocross entry fee is usually between $20 and $30 per driver. During the day you will get four or more attempts to get the best timed run possible. (A typical lap around the course is between 40 – 60 seconds.) After the timed runs, many clubs have “fun runs” for an additional cost of $1 or $2 per run. A fun run is exactly what it sounds like. You go out there and just have fun and the times don’t count towards the competition. I always look forward to this part of the event. Usually with fun runs you can have a passenger ride along in your car with you, as long as they are also participating in the event. Now is your chance to give your friends a thrill and show them what you can do.