Scion FR-S – Greater than the Sum of its Parts 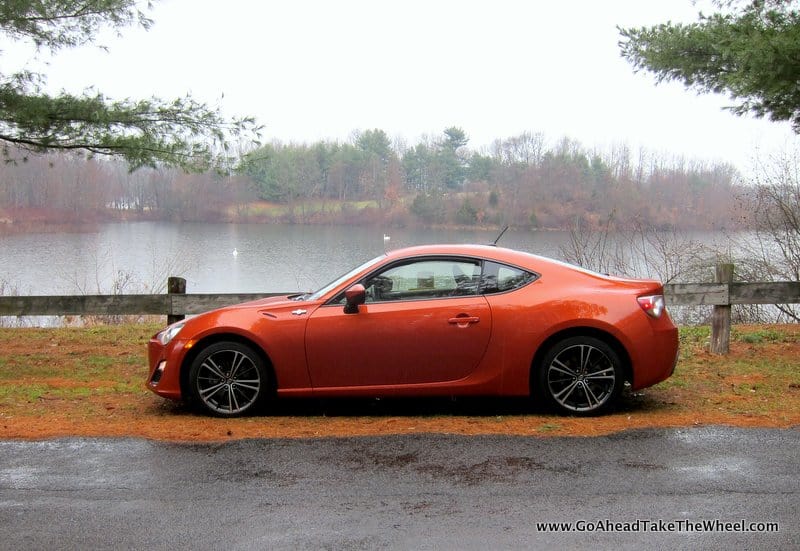 When designing the FR-S and allocating where the relatively small build budget should be directed, the focus was on the important aspects of a true enthusiast’s car. Beyond the sporty aesthetics of the car’s exterior, it was critical that the car handled well and is fun to drive out on the track. And to capture the true essence of a sports car, it needed to be rear wheel drive. Fortunately Abio Toyoda, Toyota Motor Corporation President and CEO, had this vision and turned it into reality. 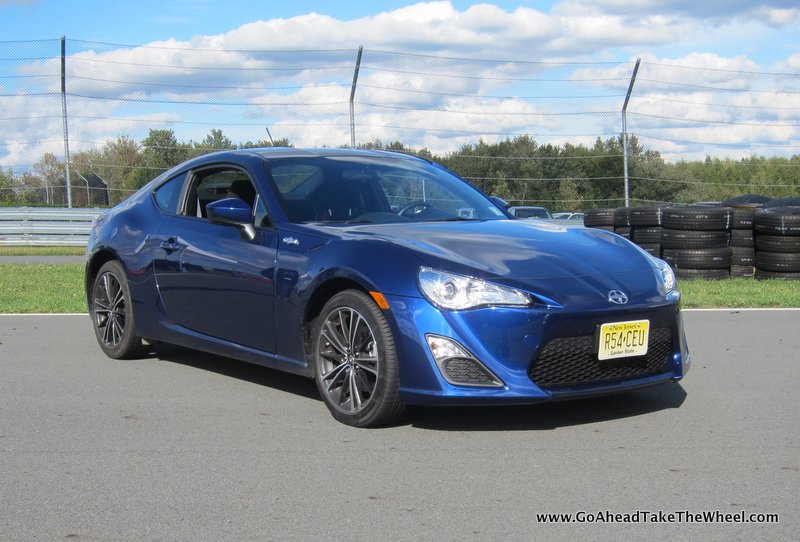 When thinking about where the soul of the FR-S is most at home, it’s on a race track or autocross course ripping though turns. Yeah, fine. The “soul” of a car is overused, but so what, as it is truly is where the car lives and breathes. When looking at the FR-S performance numbers, nothing by itself is truly impressive. We’re talking about a 200 hp engine that goes 0 – 60 mph in about 6.4 seconds. Some might yawn at those numbers, but you can’t judge the FR-S by the individual components. Instead, look at the car as a collection of the parts, which in its case the sum is greater than it should be individually. During our time with an FR-S at Monticello Raceway in NY, we quickly became impressed with its track prowess. While other higher horsepower cars out on track with us accelerated faster on the straights, the FR-S more than made up for it in the turns. To me this is where the fun of track driving is. Admittedly, I gravitate to more “momentum” based track cars than ones in which the strength is straight line speed. While in other high horsepower cars, you can just floor the gas pedal and go fast in a straight line, the FR-S is not about this. Instead, it’s a car about the driver carrying speed though turns. It’s about handling, a quality package, and being affordable to the average Joe. Having spent a considerable amount of time in a low horsepower racecar, there’s great satisfaction in passing exotics in the turns. As a result of all this, I immediately found a connection with the FR-S on the track and appreciated what it’s about.

While out on the course, I kept thinking how well tuned the car is off the showroom floor for track use. In turns, the car remains planted and lacks the typical understeer or body roll many streetcars demonstrate without installing performance upgrades or tuning. In fact, I almost forgot that I was in a streetcar, and certainly an economical sports car.

Beyond how much fun we had with the car out on the track itself, there are several other aspects of the car that will allure a track or autocross junkie towards it. To start off with, when the rear seats are folded down there’s actually room for a set of race tires and some essential tools. This sure beats being forced into buying a tire trailer and mounting a tire trailer that would be necessary for a true two-seat sports car. 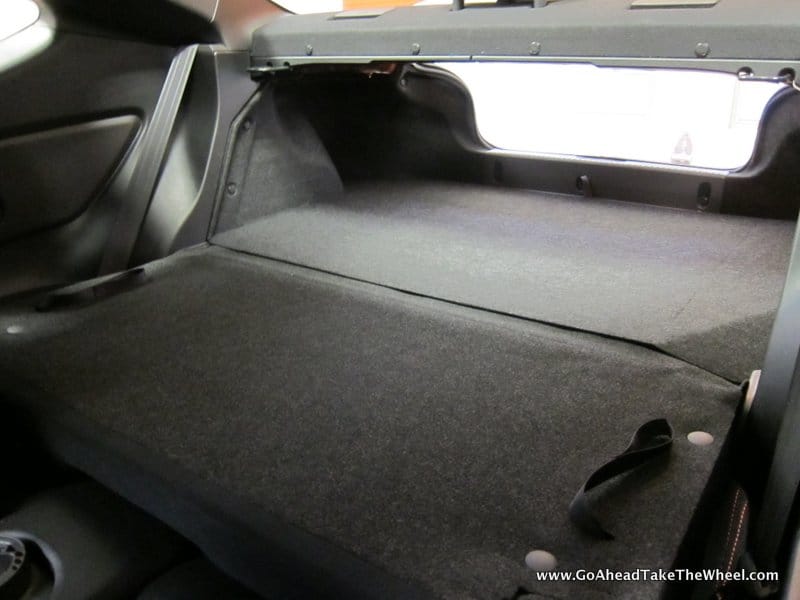 Then from a perspective of working on the car, we were happy to see how accessible various components on the car are. Heck, it doesn’t even have a silly plastic engine cover that many of us enthusiasts would simply rip off anyways. Especially considering the target market of this car, there will be many people who will want to do their own repairs. The starter, alternator, engine belts, and many other parts can actually be reached and be swapped out by the home mechanic. Even the oil filter is in a super convenient location that won’t pour all over the sub frame and your arms from being located underneath the car. 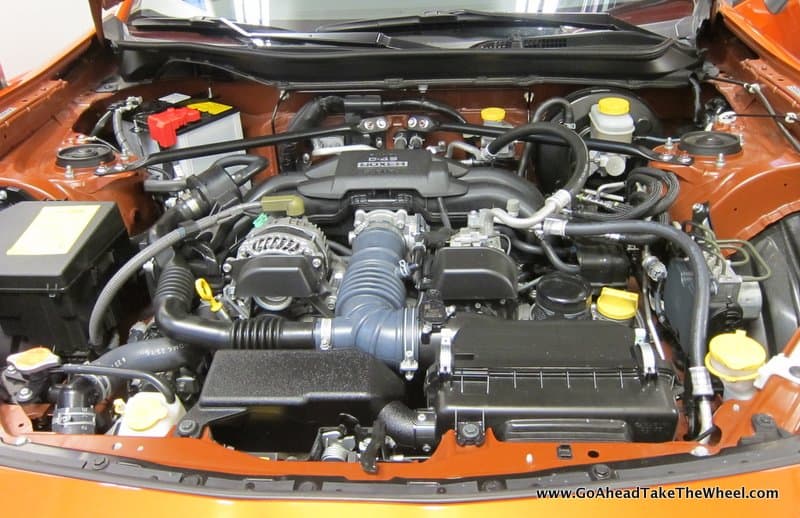 Looking underneath the FR-S, it has an aluminum undertray which on many cars is just flimsy plastic. I actually felt like when I went off track, it would provide relatively good protection for the engine. Fortunately Scion also left room on the undertray for quick access to the oil pan drain plug. 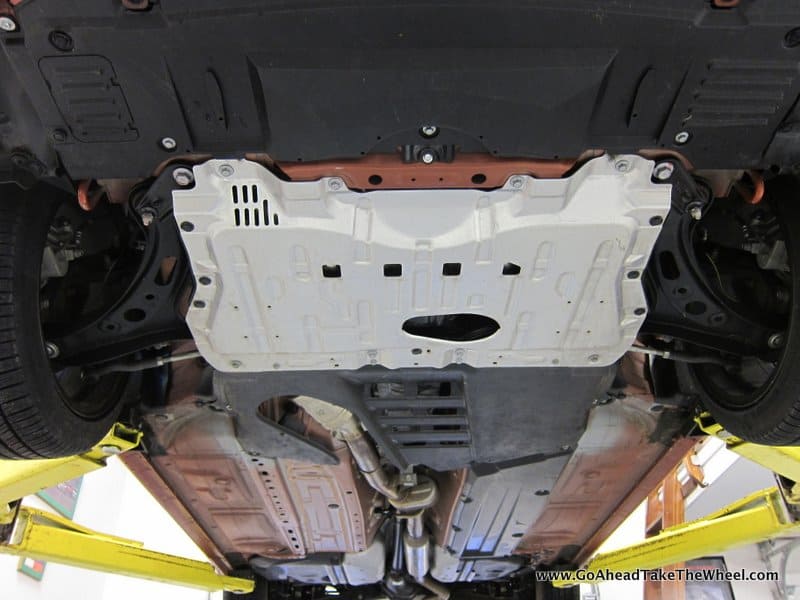 On the Street
When Jeremy Clarkson from BBC’s Top Gear labeled the FR-S “the best car I’ve ever driven,” it’s no surprise he was testing it on a track. The reason I say this is because the same attributes which make the FR-S such a great track car, also create compromises when using it on the street in terms of comfort and convenience. The biggest areas are the firm suspension, minimal sound deadening, and sports front seats.

The car’s suspension is quite firm and compliant under the riggers of track use. While that’s an asset on a closed course, it equates to really feeling the bumps on streets. From the drivers seat I wouldn’t say it’s overly harsh, but it’s not a “luxurious” ride either. However, when I made the regrettable transition into the passenger seat where I wasn’t in control or distracted by the driving enjoyment, it felt much more harsh. A driving enthusiast will deal with this and be willing to make the sacrifice, but I could see passengers who seek comfort to not enjoy the car’s ride as much. Road noise? With the car on a strict diet weighing in at just over 2,700 lbs (very similar weight to my two seat Honda S2000) and with cost controls, the car does not have a large amount of sound deadening materials. As a result, tire noise is on the louder side but still acceptable. Surprisingly on the highway, wind noise is kept to a minimum. 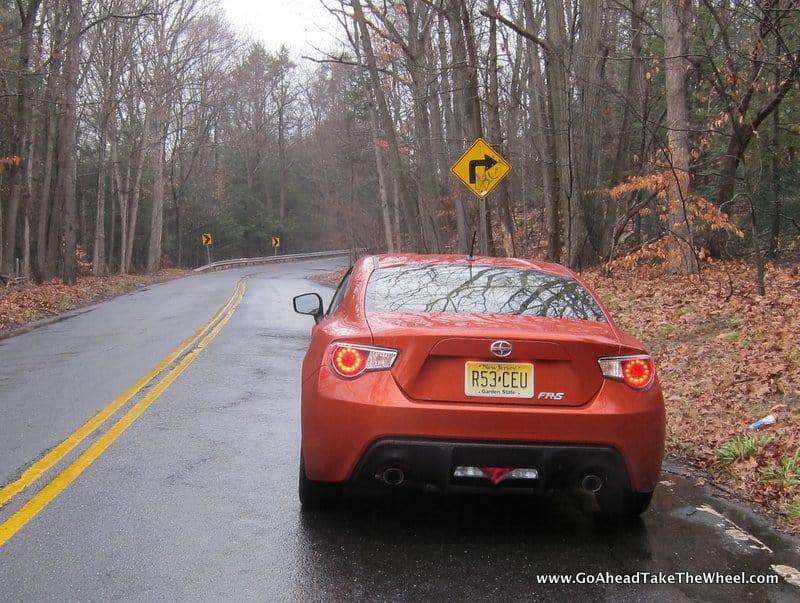 The front seats are another prime example of components that are a great asset on the track (holding the driver firmly in place), but a comprise on the street. I kept thinking about how the the FR-S seats resemble ones that you would find in a racecar. This is an aspect of the car you’ll need to evaluate for yourself. I needed to add a small seat pillow to the back of the seat during my longer drives with the car, otherwise it became painful. It wasn’t the leg bolstering that bothered me, but the side and torso bolstering that caused discomfort for me. While I’m not a small guy, I don’t consider myself especially large guy weighting in at just over 190 lbs. Our editor Nate feels that the side torso bolstering is snug too (he’s 6’1″ and 190 lbs) and he’d prefer it to be wider, but he was able to sit in them for several hours without any discomfort. One of our other editors said that it was fine on shorter trips, would be great on track, but would find it a bit uncomfortable on longer trips. We also agreed on missing center arm rests, but acknowledge that’s often the case with sports cars. 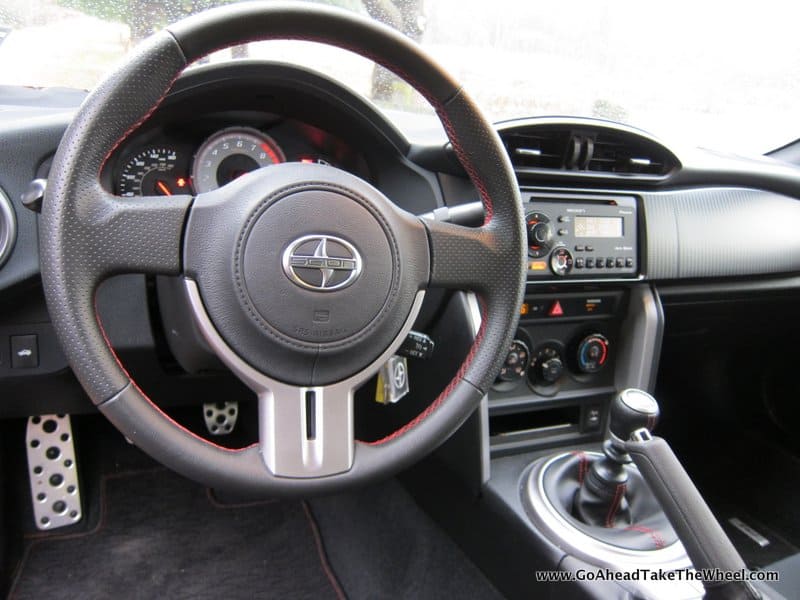 While there are technically rear seats, for all intensive purposes this is a two-seat car. For “testing purposes” I did pick up my mother-in-law with my four year old son sitting in the back. Fortunately she’s short and has a good sense of humor! As she peered into the car, she asked “where exactly do you expect me to sit?” Somehow we managed to stuff her inside, but it wasn’t easy and made for an interesting hour-long drive. Being a father of a young child, I was bummed that the FR-S can’t realistically accommodate a child in the rear and adult in front of them.

The rest of the interior is sparse and lacking of fluffy items such as heated or power seats. The stereo head unit looks like it was made 10 years ago and doesn’t have a fancy touch screen or navigation. I am honestly glad they skipped putting in an over priced unit and directed those funds elsewhere. Yet for it’s simple looks, it’s not intuitive to use. Yes there are six presets which eventually you’ll figure out how to set, but as I drove outside the area where those radio stations broadcast the frustration level with using the stereo rose again. Fortunately the speakers are adequate sounding and you can easily install a replacement aftermarket stereo head unit.

A complaint often raised about the car is that the 200 horsepower the FR-S engine produces is not adequate. I wouldn’t say it “needs” more power although like most other people, I’d love to see how it feels with a turbo charger installed. Keep in mind though if that were to come stock, the very attractive price tag would go up. When accelerating after a red light the FR-S isn’t thrilling by any means. On the highway you’ll have enough power to complete passes, but again, it’s not exciting. At the same time while we certainly enjoy driving powerful cars, it’s easy to become frustrated driving them on the street since you can’t legally open it up. While I absolutely loved driving the Camaro 1LE that we recently reviewed, I found it challenging to reign myself in and not end up behind bars. 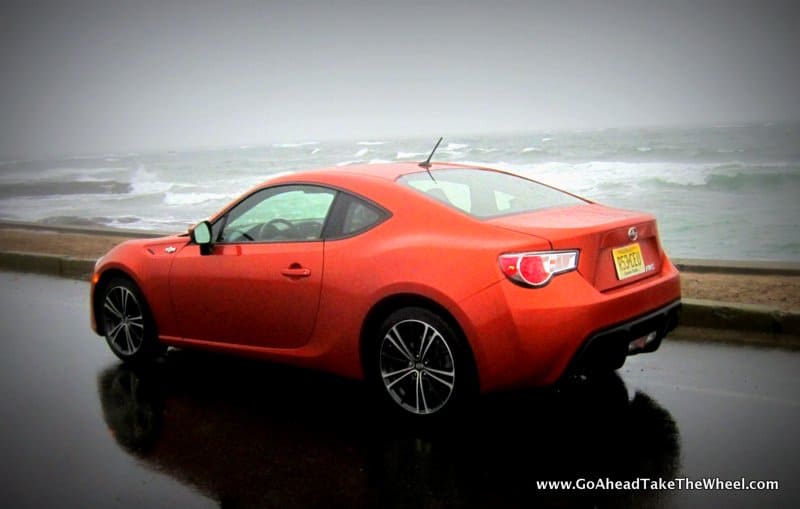 While the car doesn’t have gobs of power, we found it quite useable on the street. When enjoying some twisty back roads, on multiple occasions I became a bit concerned with how fast I was going after the car invoked a big grin. When I looked down at the speedometer, it read a modest speed. If you took a new Porsche 911 around the same turns going the same speeds, you’d probably be bored. We truly enjoyed having the limits of the car be more approachable on streets.

As I drove the FR-S more and more which included taking it on a several hour long trip, I was mentally bracing myself for a large gas bill. But it never happened. With a combination of back roads, some highway, and not driving it with gas conservation in mind, I still averaged over 30 mpg. It has a relatively low initial purchase price for what it is, easy to work on, and won’t suck all of your money in gas costs, it’s a truly wonderful package for automotive enthusiasts.

Second Opinion – Nate Lichaa
Hands down, this is one of the most fun-to-drive new cars you can buy for $25,000. Every time I would take a turn from a stop, I would purposely swing the rear end out. With the VSC in Sport mode, the rear end would kick out only a little bit. But if you turn off the VSC completely, the rear end does whatever you command. What a hoot! This car would make a great drifter too.

When I first drove the FR-S a few months ago, it was right after driving much more powerful sports cars, so it really felt underpowered to me. But I loved its extremely capable chassis, connected driving feel and pure sports car driving experience. Now that I had the opportunity to spend more time behind the wheel, it actually feels appropriately powered and spirited. I do think Scion should provide a more potent engine option though for those who wish to purchase it. Heck, if this thing came with a turbo, I wouldn’t “need” a Porsche and could save a lot of money too.

I also want to reiterate Dave’s comments about the grin this car can put on your face at legal speeds, and how affordable this car is to fuel.  There are several instances where I playfully drove 45 mph on roads with 45 mph speed limits and felt like I was speeding, while I would have been much less entertained doing the exact same thing in more luxurious performance cars. Also, in more powerful cars where I would typically average  mpg’s in the mid teens in spirited driving, I achieved approximately 23 mpg in the FR-S. Under normal driving, I was seeing mpgs in the mid to upper 20’s.