Most production cars have an oil system consisting of a sump (commonly referred to as the oil pan) which houses the oil supply, an oil pump with a screened pickup, and internal passages in the block to provide pressurized oil to bearings, cams and the like. Sometimes oil is sprayed under pistons for cooling purposes. On its way to the oil gallery it passes through a block mounted filter, and on certain high performance engines, it can be routed to an external cooler. Generally capacity is 5 or 6 quarts. This system is considered a “wet sump” as the oil is housed and pumped from the same sump.

In a dry sump system, several components are added. The oil pan is reshaped and capacity is reduced to about half of the standard pan. A pickup is located which is attached to a scavenge pump to ‘vacuum’ any and all oil from the pan, and send it to a separate oil storage tank. Typically these tanks are larger (over 10 quarts in the Corvette Z51 equipped C7) and include special internal baffling that serves to separate suspended air and gases from the oil, resulting in oil that is pure oil, as opposed to a sometimes foamy mixture, ready to be sent back to the engine.  At the base of the tank, a pickup feeds a pressure pump which routes the oil to a filter, then a thermostatic valve, and if needed to a cooler, then finally, back to the engines oil galleries.  Once the oil has done its job, it drains back internally and repeats it’s journey. In the Corvette Z51, Chevy goes so far as to include a crank scraper. This device is commonly found in custom built race engines, and serves to keep excessive oil off the crankshaft and to cut down on internal block oil spray and foaming. Greater power and reliability are realized.

A dry sump system is one that is better prepared to deal with high g loads, which can starve a standard wet sump system, and provides greater quantity of clean cool oil which results in increased performance and reliability, especially at the higher rev ranges.

But…it ain’t cheap..…the tank, as complex as it is, comprises only part of the story. Including a dry sump system is an expensive undertaking, and includes a special gerotor oil pump (more like two oil pumps, one to scavenge, one to pressurize), many more lines and fittings, and the attendant components such as the special sump and crank scraper.

More than any other single item, it’s this system that indicates to me that GM is serious with the Corvette C51 and building a legitimate pedigreed track capable automobile.

Basic Dry sump schematic:
In this example there are two stages of the scavenging pump, which ensure complete oil pickup. 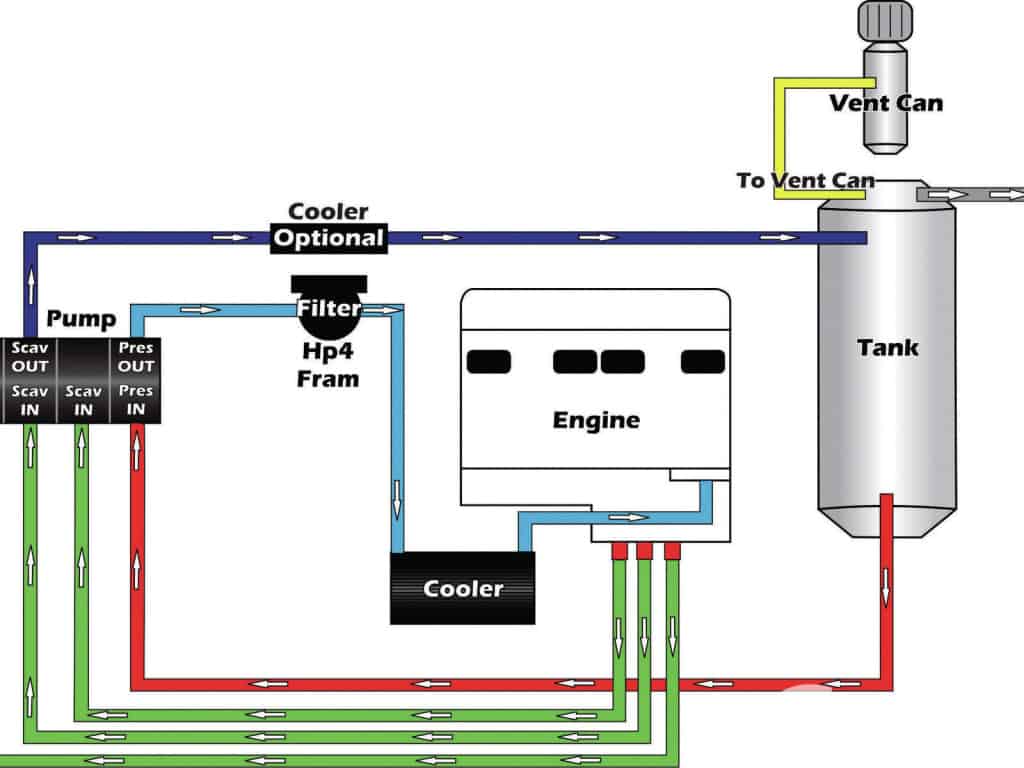