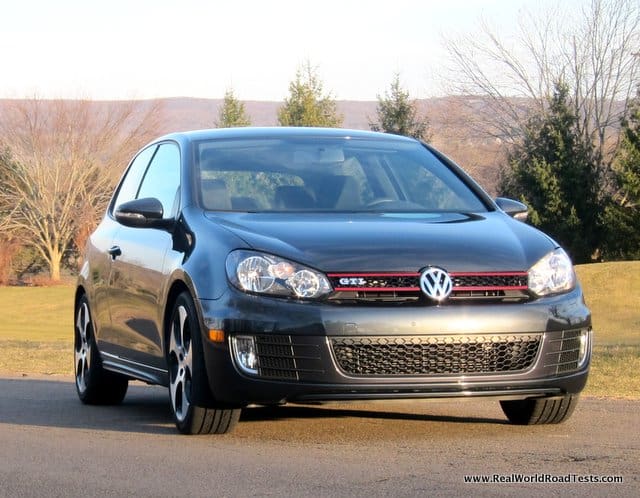 Let’s just start with a confession: I’m not objective about the 2011 Volkswagen Golf GTI. I’ve been a “Fan of Fahrvergnügen” for 40+ years, starting back when my Dad bought a brandy-new orange Kharmann Ghia convertible; my first new car (and first race car) was a 1983 Rabbit GTi. I strayed into quattro/turbo Audis but the Golfs always caught my eye.  I even race a Golf occasionally in enduros.

I didn’t like the looks of the GTI’s predecessor. That large vertical “open nose” look of the old car, reminiscent of an Audi, just didn’t suit my styling preferences. I much prefer the standard lateral cut of a nicely-done front bumper. This new one I like. If you’re also a fan of hot hatchbacks, from any angle you’ll notice the aggressive stance of the car with rocker and beltline creases that hint of a car ready to pounce. Even the restyled tail lamps are aggressively done. There are race car hints all over this car, from the front end’s allusions to a race-car “splitter” (the Euro-market extension is easily installed), to the front rocker panel cutouts for the undertray “outlets,” to the rear “diffuser”; all nice styling touches. This car just looks good. 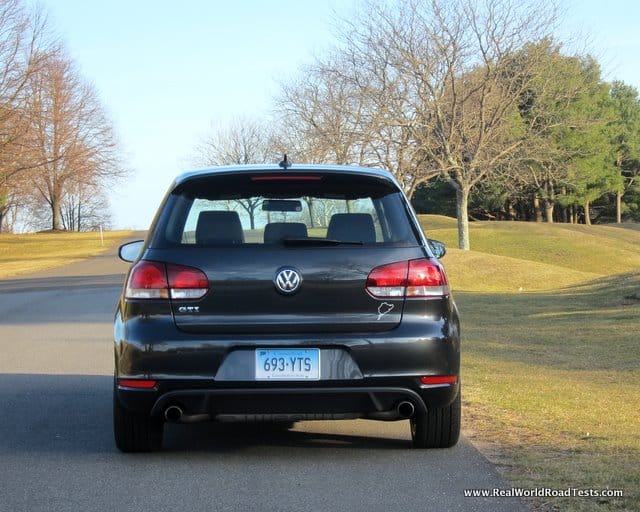 On the other hand, the 18″ “Detroit” alloy wheels with their large circular cutouts are a love ’em / hate ’em proposition. Personally, I find them a bit garish and would have preferred an old skool “Snowflake” wheel reminiscent of the Mk1 Rabbit GTI, but that’s just me.

The interior is even better. While we don’t get the true Recaro seats here in the States, the ones we do get are still very good. The car that I drove, a base GTI, had dark grey cloth fully-manual seats very reminiscent (there’s that word again) of the original Recaros from the Mark 1 GTI, including its snappy Interlagos plaid seat inserts with tasteful red stitching all around. While the driving position tends to be more upright, the seats have slider adjustments for fore and aft, a ratcheting lever for up and down, rotating knobs for seat back angle, and another lever for lumbar support. Adjust the seats to your liking, turn on the standard seat warmers, and these seats are comfortable enough for even the longest of highway trips. Rear seats are adequate for four regular-sized adults. There’s actually more legroom in the back seat of this 2-door GTI than there was in the my old 4-door Audi S4. 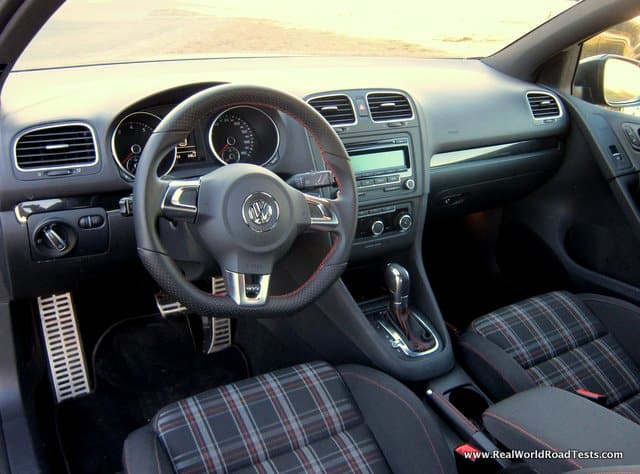 The partially flat-bottom perforated-leather-wrapped steering wheel (there’s that racing reference again) has nice, thick, hefty feel to it and the same red stitching theme, and if you buy the car with the optional steering wheel-mounted radio controls, everything is right at hand. The standard base stereo system with Sirius satellite with Bluetooth streaming works quite well, and within 5 minutes I was listening to podcasts from my iPhone. VW also offers an optional touch-screen system with satnav. HVAC controls are instantly-intuitive buttons and knobs instead of multi-screen video games. Nice touches include push button seat heater controls and an electrical heating element that comes on when you put the temperature control to full hot to warm the interior immediately instead of having to wait for the engine to warm up. The chromed pedal pads and overhead sunglasses console are also thoughtful additions.

Rear storage space is what you’d expect from a hatchback, with plenty 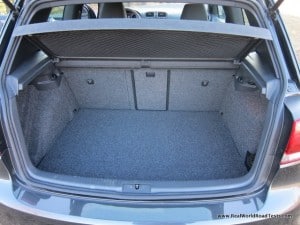 of load space with the seats down that will fit pretty much everything except a 4×8 sheet of plywood. The overall interior quality on this GTI is top-notch, standard fare for VWoA products, built solid with good tactile feel plastics and metals, the kind of stuff one would expect from higher-line Audis.

So that’s the “hatchback” part; let’s talk about the “hot” part. In today’s horsepower wars of Camaros and Mustangs, you’d be forgiven for thinking that VW’s 4-cylinder engine just can’t cut the mustard. But, you’d be wrong. This 200hp/207tq turbocharged 2L inline-4 is the perfect choice for a small hot hatch: more than enough power and torque to be very satisfyingly sporty, yet not so much as to be overly greedy. And compared to its market competitors this is one quiet, smooth, refined package. Power comes in nicely and when it’s time to “go.” Just dip deep into the loud pedal and the turbocharger takes over with minimal fuss and a lot of results. On top of that, the GTI delivers reasonable fuel economy; VW claims 24city/33hwy and we observed a consistent 28 mpg in mostly suburban, mixed, sporty driving. Starting in 2009 VW began “recommending” – but not requiring – 91 octane fuel for the GTI. We tested full tanks of both 87 and 89 octane with no perceptible changes in regular commuting performance or fuel economy (though you might want to run 91 octane for maximum performance; some on the Internet claim they’ve seen 215 dyno horsepower using 93 octane). 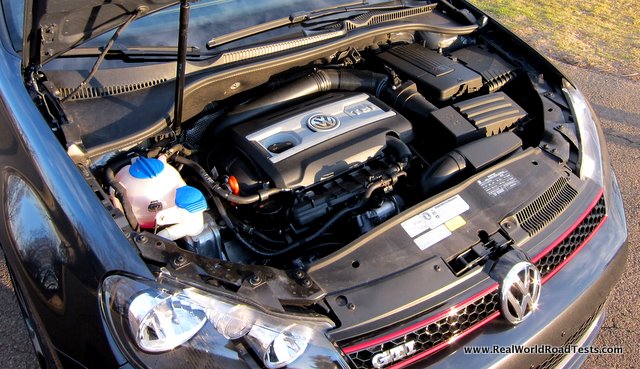 This GTI was delivered with VW’s version of the “flappy paddle” gearbox, the “DSG”. DSG is an abbreviation for the German “Direktschaltgetriebe” which probably means something like “I have two coaxial clutches, a manual gearbox, and a lot of gear shifting going on, but no clutch pedal and it’s all controlled by a computer.” Actually, it means ‘direct-shift gearbox.’ As a racer, I’m morally opposed, on religious grounds, to automatic transmissions in general. Given this, I didn’t go into this endeavor with any kind of open mind until someone pointed out to me that the very first iteration of DSG was in one of my all-time favorite race cars, the Porsche 962. OK, so now I’m listening. And guess what? This transmission is VERY good. I mean, truly good. Shifts are crisp, snappy, and quick (faster than I can do ’em with a stick, no matter how much I brag), power is continuous and smooth, and I think the darn thing blips the throttle on downshifts! There’s even an (undocumented, as far as I can tell) Launch Control, though it requires you to disable traction control and causes you to just spin the front tires. I thought I’d hate the DSG, but once I trained my left leg to keep still on the chrome dead pedal, I found it to be a very nice transaxle, maybe even within the spirit of GTI. One word of warning though: if electing to go with the DSG option, you ABSOLUTELY must get the two “flappy paddles” behind the steering wheel. Yes, you can control the same features using the shift lever, a la “Tiptronic style,” but I’d probably not be nearly as enamored with this transmission without those two switches. VW should make that standard with the DSG in all cars, not just the GTI.

The suspension and handling on this car is exactly what you’d expect from a GTI: sporty and fun. The GTI has added mass over the years, but has also managed to maintain that crisp, “tossable” feel. Turn-in and mid-corner do trend toward safer understeer, and you can get some push on exit with too much throttle, but you can still toss it into the corner and manage it with the right foot. The independent multi-link rear suspension goes a long way toward this, as do the 40-series 18″ tires. By the same token the ride is “sporty”, but not as harsh as you’d might anticipate. Except on the absolute worst roads where you need to take care of those low-profile wheels, you’ll find the ride a nice compromise. Call me old, but I suggest that 17-inch 45-series wheels/tires would go a long way toward reducing any undesired ride qualities while having no noticeable affect on street performance. 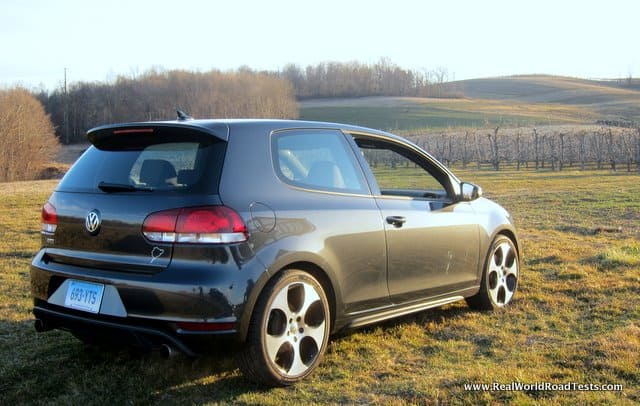 To wrap this it all up, there are many nice thoughtful functions on this car such as cool air blowing into the glovebox (better to keep your Mars bar from melting, my dear!), a 12V power port in the rear hatch (tail-gating with a hatchback, anyone?), one-touch triple turn signal flashes for lane changes, and a one-touch feature to put your wiper blades vertical at shutdown to make blade changes easier. The owner’s manual is a treasure trove of “Easter Egg” functions for your delight (and if you want some nifty Euro-only functions, talk to your dealer about re-coding via VCDS/WAG-COM).

Yeah, I enjoyed this car…to the point I went out and bought it. The VW GTI is truly greater than what the dry stats indicate, a perfect compromise of luxury, ride, performance, and handling. At a base price of $23,995 there are very few cars that give you this kind German automotive value. Until VW of America decides to import “der Polo GTi” (176hp/40mpg) or “der GTD” (GTI built with the 170hp/46mpg TDI engine – I love me some diesels!), then the Volkswagen GTI will continue its long-term reign as the Crown Prince of Hatchbacks.