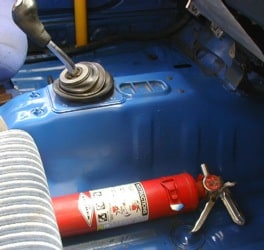 As a minimum, most clubs require that you have a fire extinguisher that meets certain specifications mounted inside of the car. There are also other fire systems that can be mounted inside the car to provide additional fire safety. Often times the fire extinguishers that meet the clubs’ requirements can’t be found by simply going into a hardware or department store. There are certain chemicals that clubs require the extinguisher to be filled with that are better suited for car fires. To find a retailer, search the internet, contact marine / boating stores, and towing supply stores. When you mount the fire extinguisher, be sure it is securely mounted in a location that you could access after taking off the racing belts if necessary. Give thought to what would happen to an unsecured fire extinguisher in an accident – it could become a projectile. The typical 2 ½ pound fire extinguisher that meets most clubs specifications can be bought for $40, plus shipping

Transponder
Every club that I know of requires that the racecar be equipped with an AMB transponder. Prior to the use of transponders, hand-held stopwatches were used to record qualifying sessions and race results. As you might imagine, it was not an incredibly accurate system. In qualifying sessions, a ½ second can cost a driver several qualifying places. From a club’s perspective, using hand-held stopwatches required several people to complete the timing and scoring process. With the advent of transponders, it became necessary to only have a few people to complete the timing and scoring process. The benefit to the driver is ensured accuracy of the lap times and race results.

This system works by using a detection loop, often embedded beneath the track surface. When a car equipped with a transponder passes over it, a signal is then sent to a computer. It provides timing information on the transponder number that corresponds to a car number in the club’s database. If you are worrying about duplicate transponder numbers causing issues, fear not. The company that makes these transponders, AMB, literally has millions of transponder numbers to ensure this will never be an issue. Before you purchase an AMB transponder, I suggest that you contact the club(s) you will be racing with to verify that this is the type of transponder which they require. Every club that I know of uses AMB, but it is better to be safe than sorry.

There are two different types of transponders that you can purchase: a rechargeable transponder and a direct-powered transponder. The rechargeable transponder would typically be used for racecars that have a limited electrical system or for someone who wanted to share the unit between two cars, although I don’t suggest sharing transponders. I recommend that you purchase the direct-powered transponder and wire the unit so when the car is on, the transponder is also on, and vice-versa. Using this type, once it is mounted and you have verified that it works properly, you can really forget that it is even there. It would be very aggravating to use a rechargeable unit and either forget to install it prior to the qualifying session or to have it run out of charge. 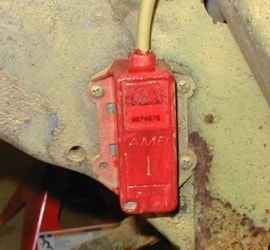 Prior to mounting the transponder, write its number down somewhere. I chose to write it on the inside of my racecar’s logbook. This way it is very convenient to find if asked for the number at the track. When mounting the transponder, typically clubs require that it be located somewhere inside or near the wheel well. To mount my transponder, I drilled a few holes in the car then used sheet metal screws to secure the transponder into place and completed the necessary wiring. (The wiring process is very simple and straightforward.) After you have mounted the transponder, verify that it turns on when the vehicle’s power supply is on. Then, when you get to your first racing event with your racecar (preferably at the competition licensing school), ask the timing and scoring booth if they would verify that their system receives information from your transponder when out on the track. You really don’t want your first qualifying session also to be the test to determine whether it is working properly

When it comes time to purchase the transponder, see if the club or region sells the transponder to its members. Many clubs will purchase the transponders in large quantities to provide people a discounted group price. If they don’t, consider posting something on one of the racing internet forums asking where it can be bought for a good price. Maybe someone even has a used one. The full retail price of a direct-powered AMB transponder ranges from $350 – $380 depending on the retailer. 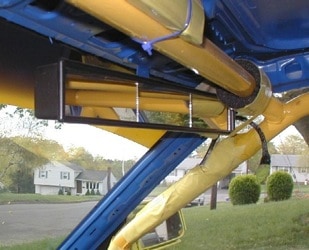 When racing, having the ability to see where other cars are located is extremely vital from both a safety and performance viewpoint. If you look in your stock rear view mirror, the range of view is fairly limited. You really need to replace the stock rear view mirror with either a wink mirror or a convex mirror, which significantly broadens the range of view. These mirrors can often be bought at automotive parts stores for approximately $20. After purchasing the mirror, you will need to determine how to mount it. The inexpensive option I chose to install a wink mirror in my car was to purchase a few “L” shaped metal brackets, and sheet metal screws. After a bit of planning, I then gently drilled into the back of the wink mirror and into the roof of the car and securely screwed it into place. I did eventually tape the end of the mirror to the roll bar to stop it from vibrating. This mounting option was a cheaper alternative to purchasing a roll bar mount for the mirror, which costs approximately $35.